Francis at the Improv

"Studying fundamental theology is one
of the most boring things on earth."
- Jorge Mario Bergoglio aka Francis -
16 February 2014

Another dandy from the so unbelievable you can't make it up file.  Turns out Francis told this gem to Rev. Michael Rogers, S.J. sometime on 16 Febraury 2014.  Rev. Rogers tweeted this and attached the hash tag #reevaluatinglifechoices (reevaluating life choices) to the message.   A screenshot of the tweet is below or click here to see the tweet.

People on twitter were perplexed when they read the above message.  Some thought it was a joke, others doubted Francis truly said the sentence, some were offended, and many wrote in support of it.  Rev. James Martin, S.J. tweeted on 17 February 2014 that indeed Francis had uttered this to his friend Rev. Rogers. See screenshot below or click here to read on twitter.

Which finally leads us to the follow up tweet from Rev. Rogers in which he answers Peter Nixon's tweet which stated, "Can't disagree more."  Rogers says, "the Pope was just joking with a fellow Jesuit..."  Read screenshot below or click here to read on twitter. 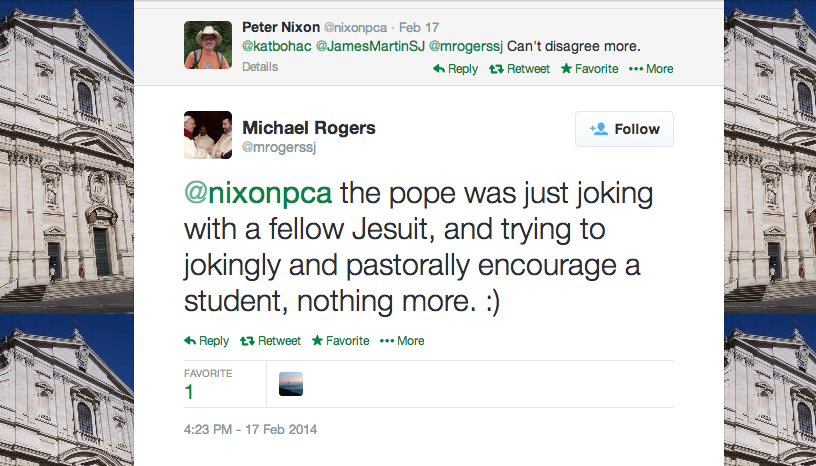 The supposed Vicar of Christ is making another joke this time about something that is fundamental to saving one's soul.  Is this why Francis seems to know so little about what it takes to save one's soul in the modern world we live in?  This is a matter which we seriously doubt St. Ignatius Loyola would be making light of.


"Do nothing, say nothing before considering if
that which you are about to say or do is
pleasing to God, profitable to yourself,
and edifying to your neighbor."
- St. Ignatius of Loyola -

Posted by hereisjorgebergoglio at 7:31 PM