Joe 'Defender of the Faith' Biden comes to Francis' rescue 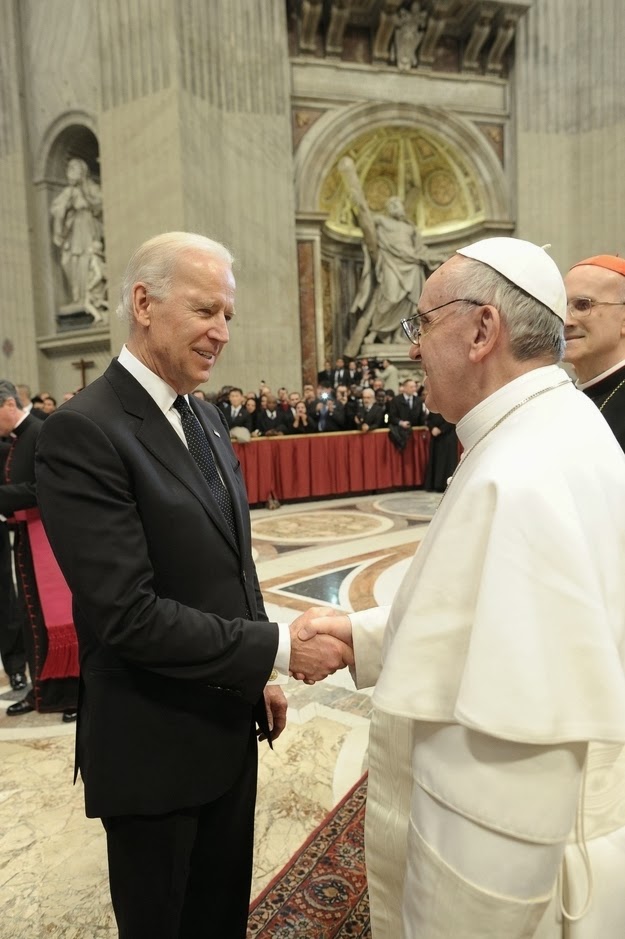 On 5 February 2014, Joe 'Defender of the Faith' Biden spoke to United Auto Workers union members.  In his remarks to the UAW, Biden took to defending Francis:


“A couple weeks ago Ken Langone, who I don’t know, a billionaire founder of Home Depot, predicted that the pope — Pope Francis’ critique of income inequity will be, quote, ‘a ‘hurdle’ for very wealthy Catholic donors, who seem to think hurt feelings trump the teachings of the Bible."

“As practicing Catholic, bless me, Father, for he has sinned.”

“I mean, come on. Come on! What are we talking about today?”

Joe Biden didn't explain how the communistic materialism written of in Francis' Evangelii Gaudium  follows the teachings of the Bible but then we doubt good old Joe has ever read one.  How humble of Joe to also ask Francis for forgiveness on behalf of Ken Langone whose supposed 'sin' was disagreeing with Francis' un-catholic pronouncements in Evangelii Gaudium.   This is the same Biden who, in October 2005 when testing the waters for a presidential run, said:


"The next Republican that tells me I'm not religious I'm going to shove my rosary beads down their throat."


“In his homily he spoke movingly about our commitments to one another, not just as people of faith, he emphasized, but as human beings.  We all know we have obligations to each other. We know. We know we have a duty to look out for one another, to keep our hearts and minds open for those who are in need. Those are the values that I was taught…Most of us are here because we felt some connection, some obligation, some responsibility to the people around us.”

It is our duty to tell Joe Biden that he isn't Catholic for a myriad of reasons the least of which is his position on abortion and to further tell him he needs to learn when to be quiet for as it is written in the Bible he so much likes to talk about:


Even a fool, if he will hold his peace shall be counted wise: and if he close his lips, a man of understanding.

With defenders like Joe Biden, Nancy Pelosi, Kathleen Sebelius, and their ilk Francis' Novus Ordo church is looking more every day like a horror show that is a mockery of the pre-Vatican II church.
Posted by hereisjorgebergoglio at 10:16 AM