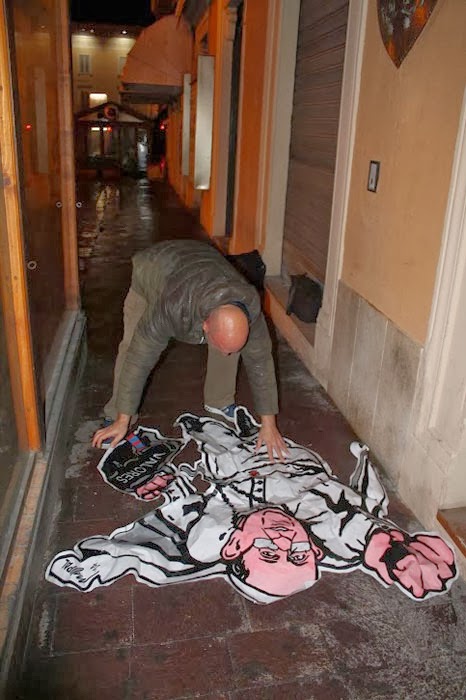 Just when you would think his fifteen minutes of fame ran out, the artist Mauro Pallotta is back with his SuperFrancis.  Not content to stick his street art on one wall in Rome, it reappears in the earthquake devastated town of L'Aquila where the kitsch art shows up in the window of an abandoned shop in the town's Piazza Duomo.  And Pallota's reason for this,


"I chose to bring up the Super-Pope just because today in L'Aquila is the anniversary of the apparition of Our Lady of Lourdes, hence also the establishment of the World Day of the Sick. I believe that L'Aquila is still very hurt and that the City, as well as its citizens are in need of positivity."

How could street art put up illegally which demeans the 'Office of the Papacy' bring about positivity?

Wouldn't getting down on one's knees and saying the Rosary do more for them?

Apparently, Pallotta wants his and Francis fame to continue as every ten days Super Pope will appear on a new building somewhere.  He has also set up a  website, twitter, and facebook for Super Pope.  The Vatican has continued to give their benevolence and support to the project through official channels.

We still wonder if this guerrilla marketing is in someway connected to the pro-sodomite public relations firms Francis has hired to help sell his image. Posted by hereisjorgebergoglio at 6:23 PM