A song for Francis

This blog has tried to show how Francis is viewed by the world and by his prelates.  One thing we haven't yet covered is how his presbyters sing about him.  Today, if you like rock 'n roll or rap, you are in for a treat!  The rapping jazz priest Stan Fortuna has recorded a song for the 1st anniversary of Francis' inauguration.  Stan Fortuna like John Zuhlsdorf has the same hobby of being a Novus Ordo priest.  Unlike Zuhlsdorf who blogs profusely and eats, Fortuna sings and takes professional quality photos from his trips around the world.  So without further ado.


'The Zipper Zone' inspired according to Fr. Stan by St. Paul and John Paul II.

Stan Fortuna is one of the founding eight members of Franciscan Friars of the Renewal.  See the screenshot of their website which for Lent includes a picture of a friar putting a piece of paper into the ruins of the Roman Fort Antonia aka the Wailing Wall.

It amazes us that  Fr. Stan and the like are in good standing with the Vatican and promoted through official channels while the Franciscan Friars of the Immaculate are in the process of being shut down by the Vatican for saying the 2007 version of the 1962 Roncalli Missal.  Maybe, the Franciscan Friars of the Immaculate should get together and pen a song about Francis bringing hope to all those who live on the fringes of society.

No word yet if Fr. Cesare Bonizzi, O.F.M. Cap. will come out of retirement to record a heavy metal ballad for Francis or if Abbot Notker Wolf OSB has plans to write a rock melody for Francis.  Stay tuned... 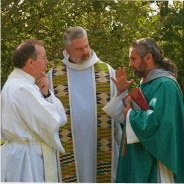