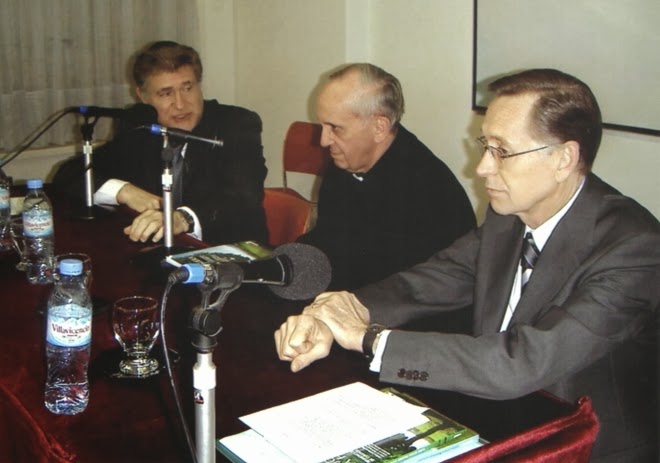 Delivery of the Maimonides Award for Inter-religious Dialogue

It was awarded to Cardinal Jorge Mario Bergoglio by the Institute for Religious Studies (ISER), in the framework of the celebrations of the 40th anniversary of ISER the service of a "successful interfaith experience" to reflect on the Judeo-Christian tradition in Argentina.

(in the photo above from left to right)
Source for the above story is from CARI, Entrega del premio Maimónides del Diálogo Interreligioso.
Just who is Maimonides?  He was known in his day as Rabbi Moses ben Maimon.  In his time he was considered a great halachic authority.  Today he is referred to as "Rambam" or "Maimonides" in honor of this vast rabbinic wisdom.  Maimonides wrote the Mishneh Torah and Guide of the Perplexed.  Usually when one comes across his name these days it is in cooing admiration of his great genius.  Often they'll say he is a supporter of  inter-faith relations and was ahead of his time.  Is this the real Maimonides?  No, it isn't.  Maimonides works are redacted and censored in the West to hide what he really thought.  He wrote it is was OK to commit sodomy with children, believed gentiles were not human, was the premier anti-black racist, was a master in the field of situational ethics, believed every word in the Bible had a hidden meaning which contained the real truth, wrote God gave Jews a divine mandate to kill the wicked followers of Christ, ad nauseam.  A few examples from Michael A. Hoffman's work, Judaism Discovered follow:
For more information on Maimonides see Michael Hoffman's Judaism Discovered or Judaism's Strange Gods at the Revisionist History Store (click here) or see Maurice Pinay's posts:
We do not believe Jorge Bergoglio is ignorant of the above facts when he has demonstrated minutiae of halachic matters.  Which brings us to the question.  Why is Jorge Mario Bergoglio accepting an award for inter-faith dialogue named after Maimonides?  Our guess is for the same reason the Novus Ordo Missae places the focus on man and not God.  Simply because of one having so much pride they no longer see God's law fit for themselves.  What do you think is the reason?
Posted by hereisjorgebergoglio at 4:30 PM