Memo to Francis via Obama 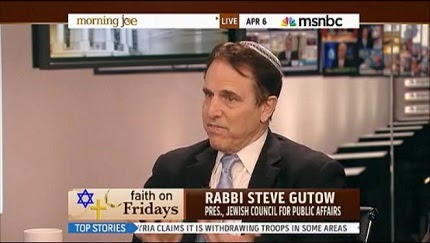 The Jewish Council for Public Affairs (JCPA) and the Coalition on the Environment and Jewish Life (COEJL) are urging its members to sign a petition asking President Obama to engage Francis in conversation about Environmental Conservation.

“Both President Obama and Pope Francis have spoken independently about our responsibility for creation and the risks of ignoring climate change,” said JCPA Chair Susan Turnbull. “For them to do so together would be a powerful reminder to all communities that we cannot squander resources or permanently damage our environment.”

“Protecting our environment is a political and religious imperative,” said JCPA President and COEJL co-chair Rabbi Steve Gutow. “As Jews, we are called on by our teachings to protect the environment. Each of us is a steward of God’s creation. Our responsibility is great; not only to ourselves and our brothers and sisters around the globe, but to future generations as well. We must do all we can to keep the protection of our environment at the forefront of national and international conversations.”


The disproved and disgraced Global Warming has alchemically been transformed into "climate change" and further morphed into "Environmental Conservation".  Can you imagine if the Christian Coalition of America sent a petition to Obama when he meets next with Netanyahu that they should discuss women's rights under Talmudic Law?  As the Yiddish expression goes, "What chutzpah!"

Not to worry though, the shabbos goy, Francis will most probably bring up the environment without prompting as his next encyclical is to be on ecology.  Why concern oneself with saving souls when one is so hung up on practicing 'tikkun olam' on the earth?

Members of the Jewish Council for Public Affairs

Partners of the Coalition on the Environment and Jewish Life

Members of the Coalition on the Environment and Jewish Life

Posted by hereisjorgebergoglio at 3:03 PM