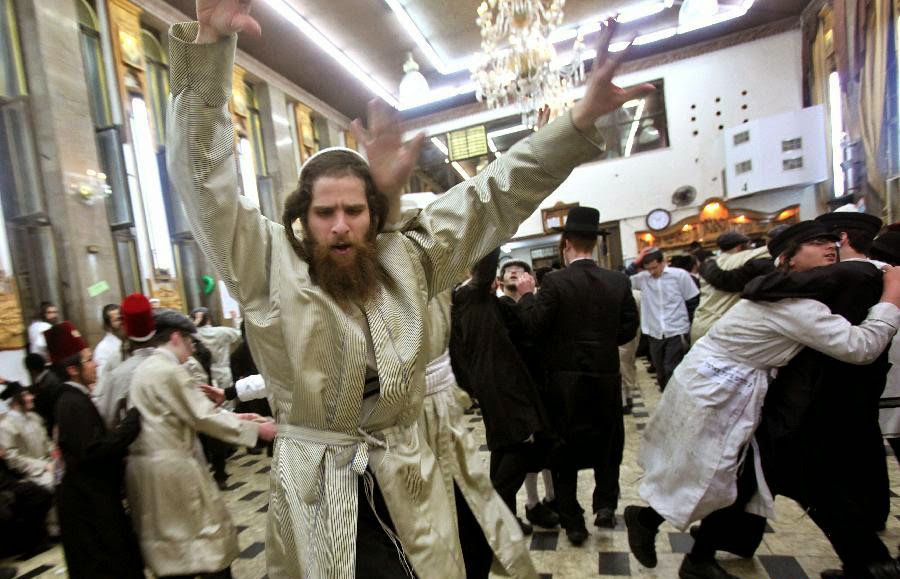 
Double canonization is a historic victory
for the Jewish people

Never has a religion so comprehensively changed its attitude to what was once seen as its worst enemy as the Roman Catholic Church did under popes John XXIII and John Paul II.

The business of manufacturing new saints going on today in Rome is mysterious to non-Catholics, even risible for atheists. The canonization of Angello Giuseppe Roncalli and Karol Jozef Woytyla, better known as popes John XXIII and John Paul II, with all its attendant process of discovering modern-day miracles, recognizing their elevated position in heaven and subsequent veneration, represent to many of us much of what is fake and artificial about modern religion. Even many Catholics tend to look at this from a cynical perspective; seasoned Vatican-observers noting how Pope Francis has pulled off a canny "balancing act" canonizing in one go a liberal pope (J23) with a conservative one (JP2). And there are the critics who accuse the new pope of wasting too much time on heavenly pageantry rather than dealing with the very real problems still facing a church struggling to acclimatize itself to the 21st century.

All these observations are valid but essentially meaningless. Creating myths of holiness and sainthood is what established religions do and the Roman Catholic Church, which even in its diminished state is still the biggest and most influential of the lot with all the historical baggage it carries, is in desperate need of new saints. John Paul II was one of a small group of individuals who influenced the last decades of the previous century and the end of the Cold War; Francis has the potential to have a similar effect on the next period in history. Over half a million people gathered this morning in St Peter's Square to hear Francis proclaim "we declare and define Blessed John XXIII and John Paul II to be saints and we enroll them among the saints, decreeing that they are to be venerated as such by the whole church." Countless millions were watching live on television around the world. Even if that means nothing to you and me, it still means something to a hell of a lot of people.

And while it wasn't specifically scheduled to coincide with the eve of Yom Hashoah, Israel's Holocaust Remembrance Day, it has a particular historical resonance for Jews everywhere since no two men did more than Roncalli and Wojtyla to reverse all those centuries of often murderous enmity of the church towards the Jewish people.

True, the double canonization today is more about internal-Vatican politics and the Papacy's need to create heroes and role-models for its adherents than inter-religious relations, but put in a historical context, it is a victory for the Jews.

John XXIII in less than five years on the throne expunged anti-Semitic references from the liturgy (one of his first decisions) and convened the Second Vatican Council, at the start of which he commissioned the writing of the Nostra Aetate, the most important declaration to come from Vatican II which resolutely proclaimed that the Jews were in no way to be seen as responsible for Jesus' death. Though the Nostra Aetate was issued after his death, John was the man who through one document swept away the theological basis for nearly two thousand years of persecution.

And while John Paul II has been accused by the more liberal elements in the church of reversing in some ways the Vatican II reforms, as far as regards the church's relationship with the Jews he took matters to another level altogether. In constant cooperation with often suspicious Jewish leaders, in being the first modern pope to visit a synagogue in Rome, in referring to the Jews as "our beloved elder brothers," authorizing full diplomatic ties with Israel and in his visit to Jerusalem, apologizing at the Western Wall for the suffering the church and its members had inflicted upon Jews.

The church that Jorge Mario Bergoglio grew up in as a young man and priest in Argentina was certainly not free of anti-Semitism and other forms of racism, but it was by then a church where a man of his nature could preach against hatred with the knowledge that he had the backing of the two most important popes of his lifetime. Today, as Pope Francis, he continues their legacy.

Another pope goes unmentioned today. The wartime record of Pius XII will continue to be debated for decades to come and despite the fact that many Jewish historians have exonerated him, even credited him with saving Jews in the Holocaust. And, of course, the current pope, like his predecessors, continue to honor his memory, but he will forever be remembered as the "Silent Pope." The Jews of Rome will never forgive what they see as his inaction over the deportation of thousands to the death camps from "his" city. The fact that the canonization of the younger popes John XXIII and John Paul has gone ahead so swiftly while that of Pius XII has been delayed again and again will not be lost. Unlike Eugenio Pacelli who hardly covered himself in glory during those dark years, his two successors were actively helping Jews in Nazi-occupied Europe. Wojtyla even took the risk as a young priest to overrule a Christian couple who wanted to bring up a Jewish orphan they had sheltered as a Catholic.

Whatever they really think of Pius XII, it's clear that today's Curia is very aware of the affront his canonization would be to many Jews and are extremely reluctant to jeopardize the massive improvement in the relationship achieved since the days of John XXIII.

The theological change wrought in just fifty years by a series of popes (including Pope Emeritus Benedict XVI despite his PR failings) is without precedent in its speed and significance in theological history. Never has a religion so comprehensively changed its attitude to what was once seen as its worst enemy. It is due first of all to the success of countless generations of Jews to retain their faith and flourish despite the church-inspired and church-sponsored blood libels, forced conversions and pogroms, but also to these two extraordinary men being honored today in Rome. The canonization of John XXIII and John Paul II is a day of rejoice for Catholics and a historical victory for the Jewish people.

Posted by hereisjorgebergoglio at 2:29 PM