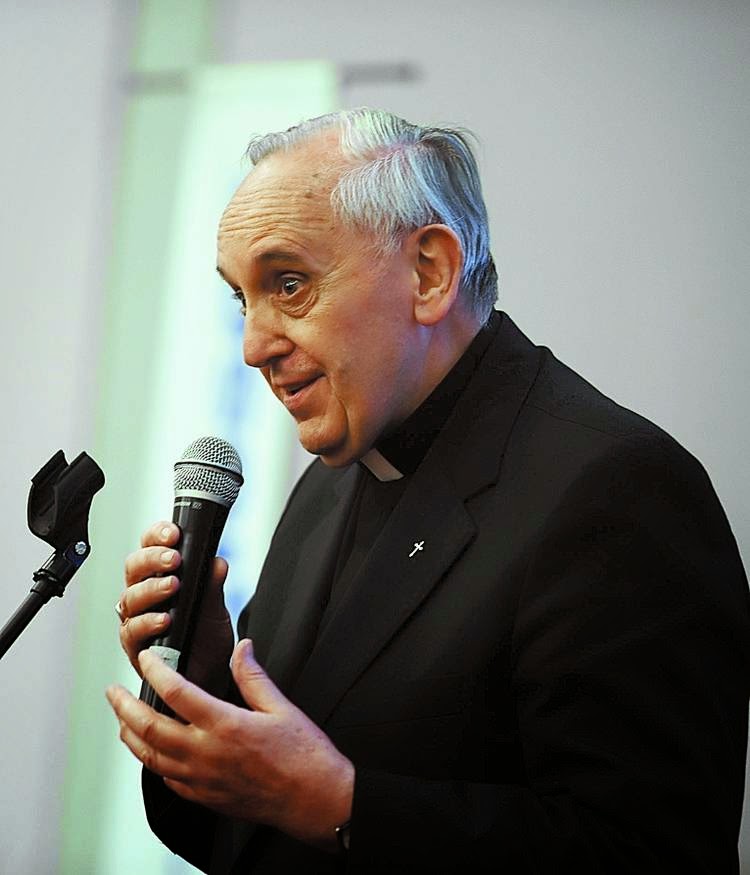 The archbishop of Havana, Cardinal Jaime Lucas Ortega y Alamino was so impressed with the remarks Jorge Mario Bergoglio made before the conclave he asked him for a copy of them.  Bergoglio gave Ortega a copy of his outline and soon after the conclave Francis gave Ortega permission to share this document publicly.  The unofficial translation below is from Radio Vatican, Bergoglio's Intervention: A diagnosis of the problems in the Church.  The original story was broken by the official magazine of the diocese of Havana, Palabra Nueva, Manuscrito entregado por el Cardenal Bergoglio al Cardenal Ortega.  Images of the handwritten notes are from Palabra Nueva, Imagen del manuscrito entregado por el Cardenal Bergoglio al Cardenal Ortega.

2. - When the Church does not come out of herself to evangelize, she becomes self-referential and then gets sick. (cf. The deformed woman of the Gospel). The evils that, over time, happen in ecclesial institutions have their root in self-referentiality and a kind of theological narcissism. In Revelation, Jesus says that he is at the door and knocks. Obviously, the text refers to his knocking from the outside in order to enter but I think about the times in which Jesus knocks from within so that we will let him come out. The self-referential Church keeps Jesus Christ within herself and does not let him out.

3. - When the Church is self-referential, inadvertently, she believes she has her own light; she ceases to be the mysterium lunae and gives way to that very serious evil, spiritual worldliness (which according to De Lubac, is the worst evil that can befall the Church). It lives to give glory only to one another.

Put simply, there are two images of the Church: Church which evangelizes and comes out of herself, the Dei Verbum religiose audiens et fidente proclamans; and the worldly Church, living within herself, of herself, for herself. This should shed light on the possible changes and reforms which must be done for the salvation of souls.

4. - Thinking of the next Pope: He must be a man who, from the contemplation and adoration of Jesus Christ, helps the Church to go out to the existential peripheries, that helps her to be the fruitful mother, who gains life from “the sweet and comforting joy of evangelizing.”