Soon to be relic 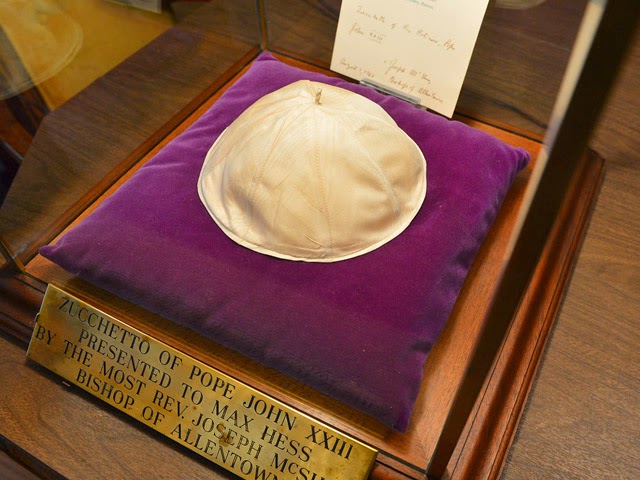 In just a few days Francis will declare two new saints, John XXIII & John Paul II.  Dan Sheehan of The Morning Call, writes an interesting article, on how one Allentown church ended up with a soon to be 2nd class relic.

As Christians around the world celebrate Easter — the faith's most important holiday, marking the resurrection of Christ — Catholics are looking ahead a week to another joyous event.

Next Sunday, two of the most popular and influential popes in church history, John XXIII and John Paul II, will become saints in the first-ever simultaneous canonization of pontiffs.

While the festivities happen in Rome, people in the Lehigh Valley will be able to get close to one of the new saints, theologically speaking. At St. Stephen of Hungary Church in Allentown, a zucchetto, or skullcap, worn by John XXIII will be on display near the sanctuary.

How that came to pass is a story involving — naturally — Max Hess Jr., the department store king and publicity genius who probably made a bigger impact on Allentown than anyone but Harry Trexler.

Hess was Jewish but had a close relationship to the Diocese of Allentown and its first bishop, Joseph McShea. He also was a major supporter of capital campaigns in the diocese, which had been created in 1961 out of the northern sections of the Archdiocese of Philadelphia.

McShea was grateful. In 1963, he was in Rome for Vatican II, the council summoned by John XXIII that had opened the year before and would fundamentally change the church's relationship with the modern world.

The bishop bought a zucchetto from the Vatican's tailor and traded it for the one the pope was wearing. It's not an uncommon practice — Pope Francis has swapped his zucchetto any number of times while greeting the faithful in St. Peter's Square.

When McShea returned to Pennsylvania, he presented the skullcap as a gift to Hess.

Hess's son, Tom, was a boy at the time but remembered the episode.

"There was a picture in The Morning Call with my dad and the bishop near the escalators in the store," he said. "In the picture he was handing [the bishop] a check [for $25,000]. … I don't know how much time passed after that, but the bishop came back and gave him [the zucchetto] as a present."

The Rev. William Seifert, pastor of St. Stephen's, said McShea's gift to Hess spoke volumes about the relationship between the two men.

"The fact that he surrendered something from the founding pontiff of the diocese says something of the esteem he held for Max," Seifert said.

Hess had an illuminated glass-and-bronze case built for the zucchetto and displayed it for several years. After selling the store to Philip Berman in 1968, he took home the zucchetto and case. When he died later that year, it passed to his son.

Fast-forward to 1996, when Tom Hess converted to Catholicism and joined the National Coalition for Clergy and Laity, an organization founded in 1978 by a number of prominent Catholics.

The group is now directed by Greg Lloyd of Whitehall Township. Lloyd's wife, Susie, a well-known Catholic author, was visiting the Hess' Allentown home one day and saw the zucchetto in the garage, where Tom had been keeping it while deciding on a proper place to display it.

"I'd love to have something like that," Lloyd thought.

Soon enough, she did. Hess donated the zucchetto to the coalition. The idea was to sell the piece to raise money for the organization, which runs on donations and, among many other things, conducts a large religious pilgrimage to upstate New York every year.

The Lloyds never sold the zucchetto. It remained on display in their house. But when the Vatican announced that John XXIII would be canonized, they agreed to lend it to St. Stephen's. The church is the diocese's center for the traditional Latin Mass, which uses a missal promulgated by John XXIII in 1962.

Seifert said the zucchetto, which will sit atop a pillar next to the statue of the Virgin Mary at the front of the church, is a second-class relic — an object worn or used by a saint. First-class relics are actual pieces of their bodies — teeth, hair, bone.

The church encourages the display of such objects as part of the veneration of saints, who are held to be models of Christian sanctity and virtue. Canonization is a formal declaration that the person has achieved heaven.

"The purpose is to allow the faithful to know the person can be imitated," Greg Lloyd said. "If I follow this person, I will not be led away from Christ, but to Christ."

Imitated, Seifert added, but not duplicated. For example, modern society would likely frown on the way St. Francis renounced his family wealth — by publicly stripping naked and presenting his clothing and other belongings to his father.

The church has used different means over the centuries to bestow sainthood. Many of the early saints earned the title through martyrdom. But rules and standards evolved over the years.

In the case of the two popes, some of these rules were altered. Church law normally requires that a person proposed for sainthood be credited with two miraculous interventions after death. John XXIII is only credited with one such miracle, but because of his reputation for virtue, Pope Francis waived the requirement of a second.

John Paul, born Karol Wojtyla, had an epic pontificate. Elected in 1978 at age 58, the handsome and athletic Pole became the most widely traveled pope in history, drawing millions to his appearances in a reign that lasted nearly 27 years. When he died in 2005, crowds in St. Peter's Square chanted "Santo Subito!", meaning "Make him a saint now!"

John XXIII was the good-humored son of Italian peasants. Born Angelo Roncalli, he was the fourth of 14 children. Because he was 76 at his election in 1958, he wasn't expected to accomplish much as pope, but his summoning of Vatican II led to significant and lasting changes in the church, especially in its relation to other faiths.

Seifert said John XXIII was famous for his wit. When a reporter asked the pope how many people worked in the Vatican, he replied "About half of them."

Known as "the Good Pope" because of his holiness and affability, John XXIII died of stomach cancer in 1963. He was beatified — the last step before canonization — by John Paul II in 2000.

Seifert and Lloyd said the zucchetto is on loan to St. Stephen's for an undetermined period. It will be unveiled next Sunday, when the church will serve brunch from 9 to 11 a.m. and remain open until 4 p.m.

Posted by hereisjorgebergoglio at 4:08 PM