"a priest that over weeks gives antisemitic talks until Jesus, on the cross, looks at the Virgin,
who was at his side, and says to her,
'Mom, let's go since they don't like us...'"
- a joke told by Francis -
17 January 2014

By now most know that on 17 January 2014, Francis had sixteen rabbis over for lunch at the Domus Sanctae Marthae in the Vatican.  What hasn't been reported in the mainstream media but has been written of in the Jewish press are some of the comments made during the kosher meal.  The rabbis in attendance said the meal was a great thing.  Further they joked it seemed it was a 'last lunch' instead of 'The Last Supper'.  Not to be outdone by the rabbis Francis started telling jokes:

I was at the Pope's table: there were very deep thoughts about subjects such as Messianism, inter religious dialogue, and how to sum up the Muslims, he told us that, that morning he had spoken about Moses and his war against the Amalekites, and told religious jokes; the one the Pope told was a classic, it is very good and told by him it adds value to it, about a priest that over weeks gives antisemitic talks until Jesus, on the cross, looks at the Virgin, who was at his side, and says to her, 'Mom, let's go since they don't like us...', related the president of the Latin-American Assembly of Rabbis.

"In that frame the table was widened and we all ended up around the Pope, as its shown -- (see gallery) (picture) -- and then we had to go, but we continued telling anecdotes and jokes and I said that the most ideal thing would be to put what was happening in the words of the psalm: How beautiful and pleasant is [it] that the brothers are sitting together!" with much warmth and harmony, he continued.

The behavior of Francis joking about Our Lord's crucifixion as well as portraying Our Lord as a practicing Jew isn't new to him. (see Jorge jokes about Our Lord's Crucifixion)  It is certainly shocking though to hear it from the mouth of one whom is supposed to be the 'Vicar of Christ' in this world.  If Francis sees Our Lord's sufferings for our sins as a joke, how will his followers perceive Our Lord?  Did Christ stop carrying His Cross when people cursed and spat at Him?  No, He prayed for them and continued carrying His Cross with the goal of giving those who cursed and spat at Him the chance at Eternal Salvation.  God doesn't give up on us, to the contrary, it is we who give up on believing in Him.  With Francis' aversion to the Crucifixion becoming more and more apparent does he believe in its redeeming qualities or is his religion something else entirely?

Why does Francis always portray Christ as a simple Jew rather than the Son of God?  For those who believe Jesus and modern day Jews are the same, did Christ have a bar mitzvah or celebrate a Seder meal?  What does Rabbi Mark Glickman have to say about Seder Meals?  From Seattle Times, Passover seders are out of place in churches by Rabbi Mark Glickman:


For starters, the Last Supper couldn't have been a Passover Seder, because the Passover Seder didn't exist until several decades after Jesus' death. There were Passover celebrations during his day, of course, but the particular liturgy and ritual of the Seder was a response to the destruction of the Jerusalem Temple in the year 70, and it wasn't finalized until sometime during the third century.

What's more — and to be perfectly honest — the Seder developed, in part, as an anti-Christian polemic — a "slam" on the then-new and growing religion called Christianity. Such religious critique is all but absent from contemporary Seders, but the anti-Christian roots of the event are unmistakable.

A church Seder is thus a Christian event rooted in anti-Christianity. It makes about as much sense as a GOP rally for Barack Obama or a symphony boosters fundraiser for punk rock.

Unless Christ traveled in time to celebrate a meal with a bunch of people who to put it mildly didn't approve of him then He never celebrated a Seder Meal.  This naturally brings up the question of why do so many Novus Ordo churches celebrate one?

How about the bar mitzvah?  Surely, Christ had one of these after all He was a "Jew".  According to the website, My Jewish Learning under their entry History of Bar/Bat Mitzvah and Confirmation:


By the 14th century, sources mention a boy being called up to the Torah for the first time on the Sabbath coinciding with or following his 13th birthday. By the 17th century, boys were also reading Torah and delivering talks, often on talmudic learning, at an afternoon seudat mitzvah (ritual meal). Today the speech, usually a commentary on the weekly Torah portion, generally takes place during the morning service.

What!?  The bar mitzvah didn't become part of the Tamludic Jewish religion until the 1300's!  Guess Christ would have had to time travel once again to make this possible.  We bring this up not only because of Franics' joke but also because his favorite painting (White Crucifixion by Marc Chagall) portrays Jesus the Christ as a Talmudic Jew.  Many Novus Ordo church goers hold Judaism aloft in their minds higher than the Gospels.

But we are digressing, back to Amalek...

Why does Francis mention the Amalekites?  Is there a connection between this, his Jewish guests, and the joke he told?  The blog Maurice Pinay states it with these words,


Biblical Scripture speaks of Amalek as a tribe that waged war with the Israelites of whom God said, "I will destroy the memory of Amalec from under heaven" and of whom Moses wrote, "...the hand of the throne of the Lord, and the war of the Lord shall be against Amalec, from generation to generation." (Exodus 17;14-16) Needless to say, this is a far cry from Christ's teaching to love one's enemies, but such was the state of things prior to the true redemption through Christ's sacrifice on the cross.

But regarding the extermination of Amalek, Scripture indeed records that Amalek was completely destroyed to the last man in 1 Chronicles, 4;43, "And they slew the remnant of the Amalecites, who had been able to escape, and they dwelt there in their stead unto this day." This is circa 500 B.C.

Did you catch that?  Amalek is dead according to the Old Testament -- gone forever.  For all those Novus Ordo church goers who believe the Talmudic Jews are simply following the Old Testament, they better sit down because in The Jewish Encyclopedia one reads under the entry "Amalek":


... the rabbis say: "Never will the throne of God—the Lord of Truth, Justice, and Love—be fully established until the seed of Amalek—the principle of hatred and wrongdoing—be destroyed forever (Pesiḳ., l.c., and Targ. Yer. I. and II. to Ex. l.c.). Henceforth "Amalek" became the popular term for Jew-hater.

What?  The Talmudic Jews don't believe what was written in the Old Testament!   God's kingdom cannot be established fully on earth until "Amalek" is wiped out, forget about Jesus the Christ.  "Amalek" is anyone who is a Jew-hater.  Antisemites are those who don't like Jews.  Christ according to Francis is a Jew.  Is this beginning to make sense?


The late Israeli politician and Minister of several offices in the Israeli government, Shulamit Aloni, appeared on Amy Goodman's Democracy Now show and had the following to say about antisemitism,
"It's a Trick, We Always Use It."


So an antisemite or Amalekite is anyone whom the Talmudic Jews perceive as a threat to them and their power on earth.  Who does Francis see as Amalek?  Who knows, it could be Rosary counters, the Franciscan Friars Immaculate, or any Catholic addicted to the Tridentine Mass?  Has Francis' best rabbinical friend forever Rabbi Skorka, who also happened to be at 'the last lunch', a public opinion on the Amalekites?  In a piece Skorka published in LA NACION, Entre el recuerdo y la memoria about the bombing of the Asociación Mutual Israelita Argentina (AMIA) building, he has a lot to say about Amalek.


...Amalek was, according to the biblical account, the people who attacked the Hebrews while they forged the path of freedom, after being freed by God from Egyptian bondage.

Through battle, the people guided by God threw the Amalekite circumstantially danger.

Forty years after that event God prescribes to the people ( Deuteronomy 25:17-19) that they remember forever that disastrous attack and never forget the mission of Amalek is to re-achieve their ominous plans. Two requirements are emphasized in the Bible in this paragraph, concerning this topic: have memory and don't forget.

...Having memory is the divine mandate prescribed to people so that they can reach maturity. The vicious repeating (of) the mistakes is due to ignorance or lack of an analytical reading of the experience in the past, both in the individual and the collective, (and) is a reflection of the mediocrity that hinders spiritual and ethical development of society .

...Amalek had made a devastating new appearance on the face of the earth, this time in our country.

...Forgetfulness is not only a challenge for Argentina society: it is also for those villages where the anti-Semitism of its past, a generator crimes and violations, resurfaces as a rabid anti-Zionism-that is, the negation (of) the Jewish people's right to live freely in their historical plot [Israel], in peace with all its neighbors, silent or cynically justifying attacks and multiple forms of violence.

Did you catch all that?  One should never forget Amalak exists in the world if you want to reach maturity.  It is also a divine mandate to remember slights against one's religion.  And finally Amalek has made a devastating new appearance on earth!  Do the Talmudic Jews not believe in forgiveness?  If they did how would they go about forgiving the "straw man" of their own creation?

All this leads us back to Francis' behavior quoted above at the beginning.  To recap, Francis had many Talmudic rabbis over at the Vatican as lunch guests on the same day he gave a sermon on Amalek.  These rabbis like Francis appreciate a good joke now and then.  They referred to their lunch as the "Last Lunch" mocking Our Lord's Last Supper where He instituted the sacrifice of the Mass all the while Francis, sat there.  In response the 'Vicar of Christ' Francis told a joke which blasphemed Our Lord's Crucifixion.  You can't make this stuff up!  Antisemitism, Amalek, blaspheming Our Lord, inter-faith relations, Talmudic rabbis in the Vatican, it is all beginning to make sense...

May God have Mercy on us and this blasphemer in Rome.


For it is impossible for those who were once illuminated, have
tasted also the heavenly gift, and were made partakers of the
Holy Ghost, Have moreover tasted the good word of God,
and the powers of the world to come, And are fallen
away: to be renewed again to penance, crucifying
again to themselves the Son of God,
and making him a mockery.
- Hebrews 6: 4-6 -


--- NOTES ---
Below are screen shots of the article quoted from at the beginning of this blog entry.  The story appeared in Agencia Judia de Noticias and Itol Gadol. Clicking on the entries underneath the screenshots of the webpage will take one to the original websites. 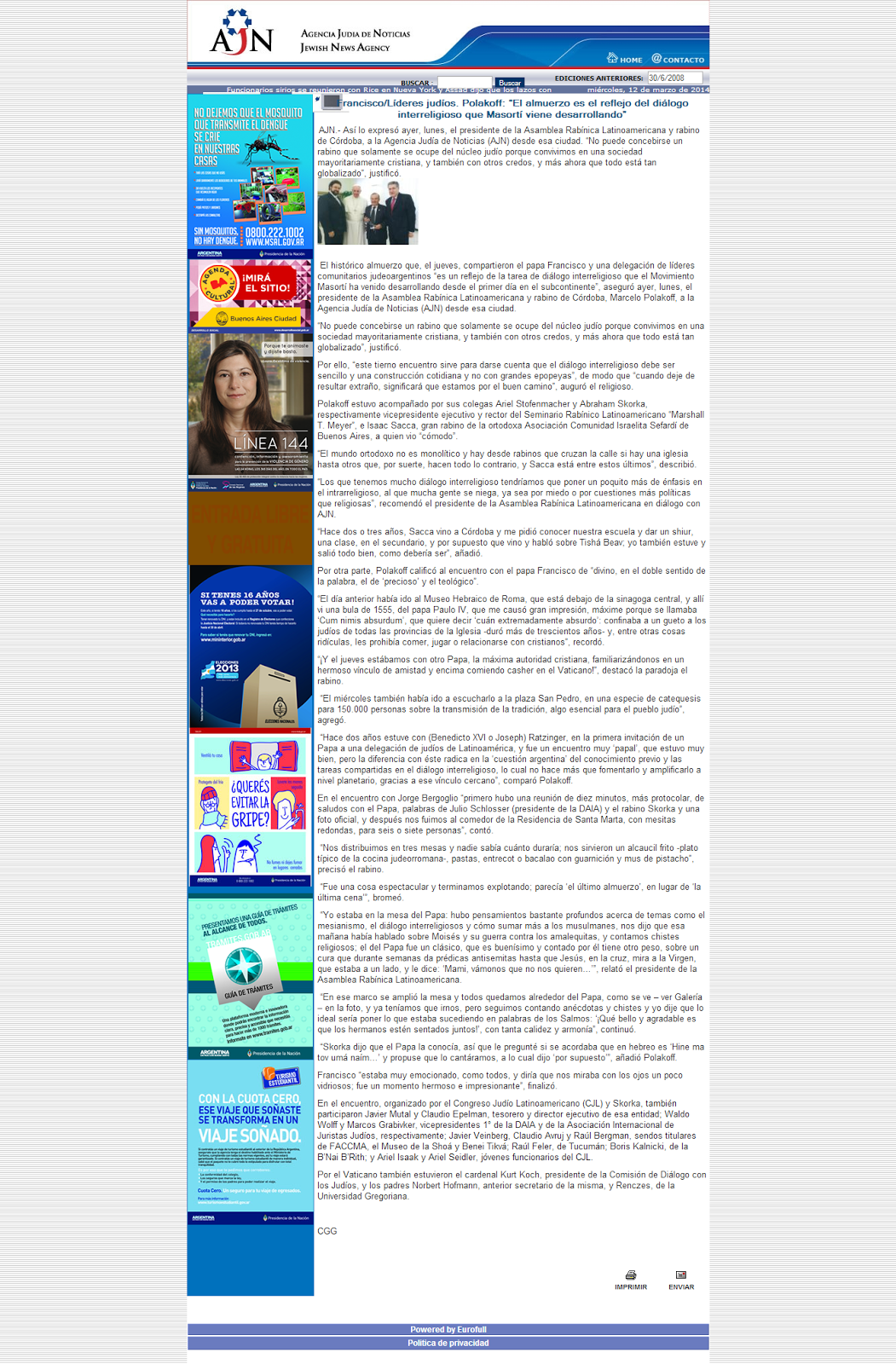 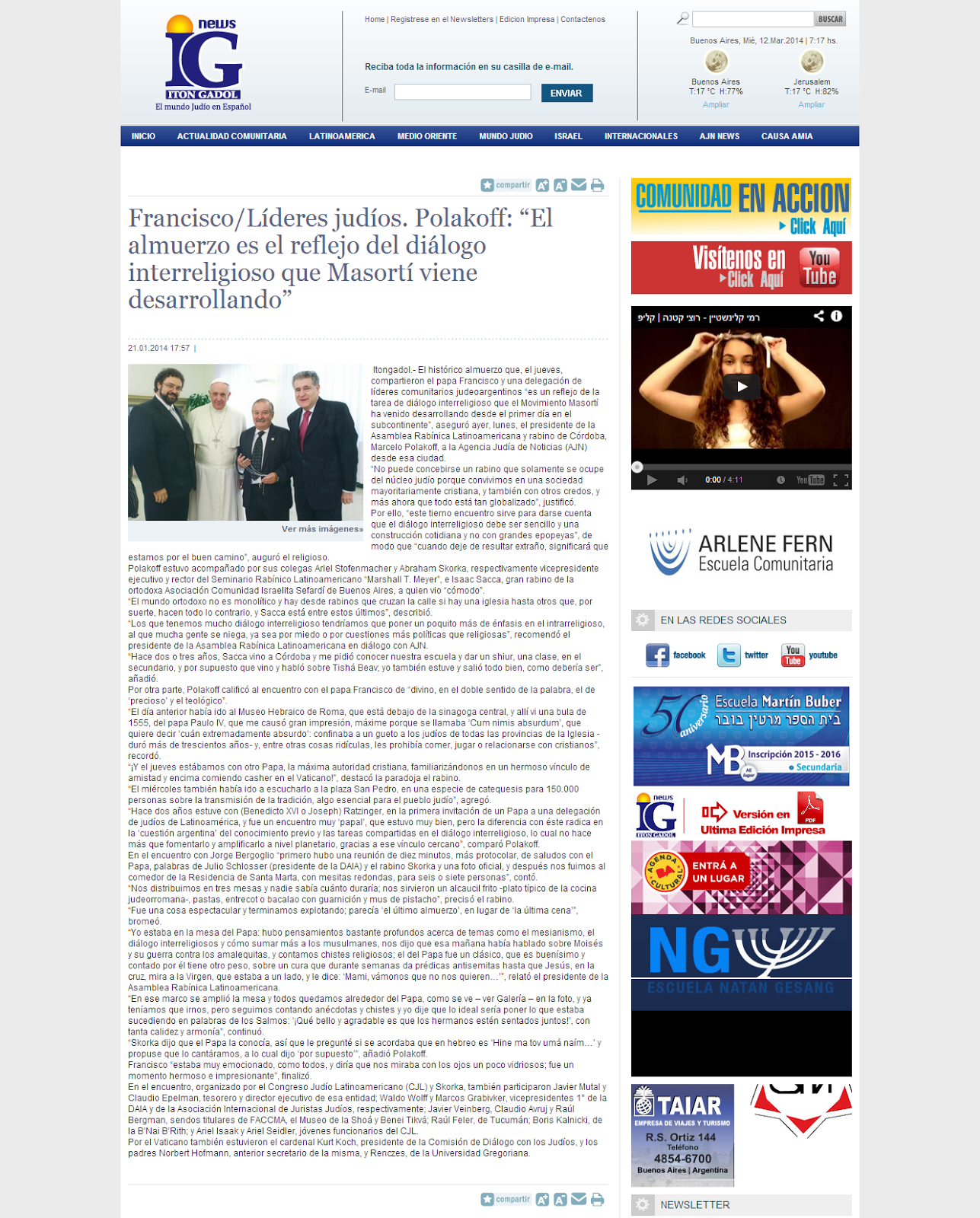 For more of Francis' humor see:

For more on Amalek see:

Posted by hereisjorgebergoglio at 2:08 PM