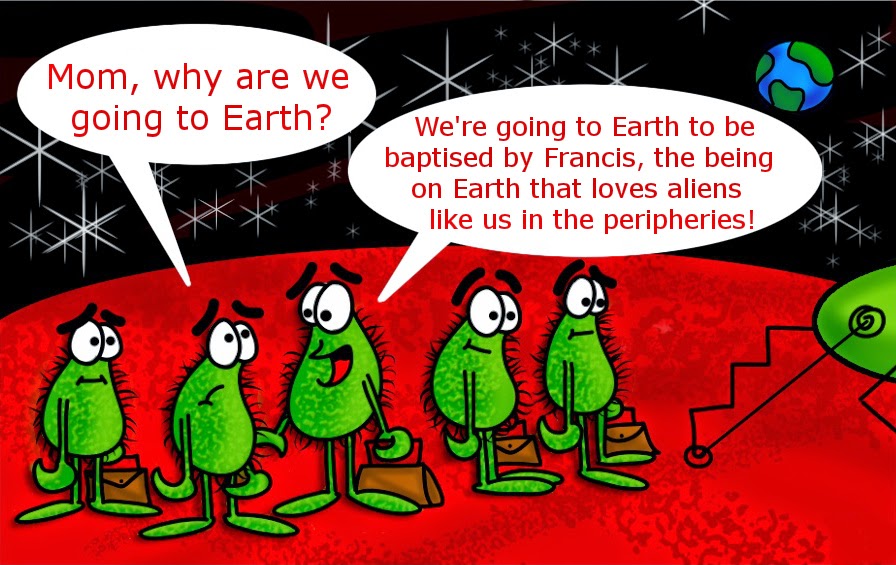 "If – for example - tomorrow an expedition of Martians came, and some of them came to us, here... Martians, right? Green, with that long nose and big ears, just like children paint them... And one says, 'But I want to be baptized!' What would happen?"
- Francis in his sermon on 12 May 2014-

Based on what we have read published on Francis' sermon from 12 May 2014 and going on his previous behavior, we here at Call Me Jorge... believe Francis would immediately baptize the alien.  Not only that but he would also forgo catechism as who needs it these days.

What is of more interest to us is what Francis implied in his sermon concerning the Holy Spirit.  Francis quotes his newly canonized saint, John XXIII who said the Holy Spirit updates the Church.  Hence the 2nd Vatican Council is the work of God.  Francis previously talks in the sermon about how the Holy Spirit is the living presence of God in the Church and who are you, dear readers, to close the doors on the Holy Spirit?  Or in Francis' case who are you to oppose change in the Church?  Francis takes something out of context from the New Testament and folds it over on itself to use against Catholics who remain true to the Faith.

Being that Francis is a modernist, he sees himself as a savior of the Church.  This is because he believes like all modernists, if the Church isn't changing, she is dying.  So he must help it change whether or not its members want to.  In this same manner, Francis also sees himself as a martyr for the Church as there are those who will resist these changes.  This is dire times for Catholics who stay true to the Faith.  The Novus Ordo church instead is closing the door on Christ and the Apostles who commanded,

"Therefore, brethren, stand fast; and hold the traditions which you have learned, whether by word, or by our epistle."


Our thoughts on the matter are still incomplete, in the words above, but we believe the regular readers of Call Me Jorge... will see where there are going with them.  It is a good time to reread the Oath on Modernism to remind us whom we are dealing with at the head of the Novus Ordo church and the manner of his thought.  Below is the complete Vatican Radio article, Pope at Mass: The Holy Spirit makes the unthinkable possible, which is where we came across Francis' words.

"Who are we to close the doors " to the Holy Spirit? This was the question that Pope Francis repeated this morning during his homily at Mass at Casa Santa Marta, a homily dedicated to the conversion of the first pagans to Christianity. The Holy Spirit, he reiterated, is what makes the Church to go "beyond the limits, go ever forward."

The Spirit blows where it wills, but one of the most common temptations of those who have faith is to bar its path and drive it in one direction or another. A temptation that was not alien even in the early days of the Church, as the experience of Simon Peter in today’s reading from the Acts of the Apostles shows. A community of pagans welcomes the announcement of the Gospel and Peter is an eyewitness to the descent of the Holy Spirit on them. First hesitates to make contact with what he had always considered "unclean" and then he suffers harsh criticism from the Christians of Jerusalem, shocked by the fact that their leader had eaten with the "uncircumcised" and had even baptized them. A moment of internal crisis that Pope Francis recalls with a hint of irony :

"That was unthinkable. If – for example - tomorrow an expedition of Martians came, and some of them came to us, here... Martians, right? Green, with that long nose and big ears, just like children paint them... And one says, 'But I want to be baptized!' What would happen?"

Peter understands his error when a vision enlightens him to a fundamental truth: that which has been purified by God cannot be called "profane" by anyone. And in narrating these facts to the crowd that criticized him, the Apostle calms them all with this statement: "If then God gave them the same gift He gave to us when we came to believe in the Lord Jesus Christ, who was I to be able to hinder God?"

"When the Lord shows us the way, who are we to say, 'No, Lord, it is not prudent! No, lets do it this way'... and Peter in that first diocese - the first diocese was Antioch - makes this decision: ‘Who am I to admit impediments?' A nice word for bishops, for priests and for Christians. Who are we to close doors? In the early Church, even today, there is the ministry of the ostiary [usher]. And what did the ostiary do? He opened the door, received the people, allowed them to pass. But it was never the ministry of the closed door, never."

Again Pope Francis repeated, God has left the guidance of the Church "in the hands of the Holy Spirit." "The Holy Spirit - he continued - as Jesus said, will teach us everything" and "remind us what Jesus taught us":

Posted by hereisjorgebergoglio at 3:11 PM