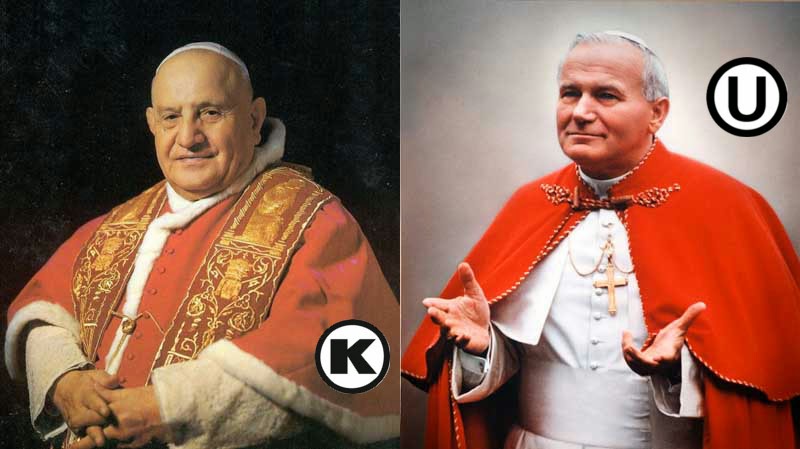 A recent article in the Toronto Star, New saints understood need for Jewish state, by Rabbi Dow Marmur needs little comment as the rabbis see it fit to rid the Novus Ordo church of its façade and expose the Novus Ordo church for the Talmud worshiping non-Catholic religion it is.  Always the everlasting victims, Marmur and company take great pride in boasting of this Frankenstein of a golem they have spent years creating.

New saints understood need for Jewish state
Despite the canonization of two popes who recognized the importance of Israel, many rank-and-file members of the Catholic Church still find it difficult to accept.

Commenting on last month’s canonization of Popes John XXIII and John Paul II, Abraham Foxman, the director of the Anti-Defamation League in the United States, remarked that in the Jewish community the two popes “have already been saints for a long time.”

Other Jewish leaders spoke in similar terms. Rabbi David Rosen of Jerusalem, who has special links to the Vatican and was one of the 18 Jewish representatives given a place of honour at the ceremony in Rome, described the new saints as the great heroes of Catholic-Jewish reconciliation: “No two popes did more to transform the teaching of the Catholic Church toward Jews, Judaism and Israel from one of hostility to love and respect.”

Even though Jews don’t share the Catholic theology of sainthood, they were honoured to be afforded an opportunity to express their appreciation of what the two leaders had done, not only for Jews but for the entire world.

Angelo Roncalli, born in Italy in 1881, was Pope John XXIII between 1958 and 1963. He convened the Second Vatican Council that led to the historic document Nostra Aetate. It rejected the charge that the Jews killed Jesus and it condemned anti-Semitism. He also initiated the process that culminated in the Vatican’s recognition of the State of Israel.

Karol Wojtyla was Pope John Paul II between 1978 and 2005. He was 19 when in 1939 the Nazis invaded his native Poland where he witnessed the horrors of the Holocaust. The experience came to shape his ministry. His encounter with survivors at Yad Vashem, the Holocaust Memorial in Jerusalem, during his pilgrimage to Israel in 2000 is unforgettable, as is his visit to the Western Wall, the remnant of the ancient Temple, Judaism’s holiest site.

After visiting the synagogue in Rome in 1986, the first pope to do so after St. Peter, John Paul II declared: “I thank Divine Providence that I was able to visit our ‘elder brothers’ in the faith of Abraham in their Roman Synagogue! Blessed be the God of our fathers! The God of peace!”

This was a clear departure from Christian supersessionism. In place of the age-old insistence that Christianity has superseded and replaced Judaism, this pope affirmed God’s continued covenant with the people of Israel and thus provided the necessary framework for honest and mutually respectful Catholic-Jewish co-operation.

However, to reach Catholics in the pew, the Church must now go beyond theology and persuade its adherents that the Jews are a people, not only members of a faith community. John XXIII sensed it out of his deep understanding of the nature of Judaism. John Paul II knew it first-hand through his encounters with Jews in Poland, some of whom became his personal friends.

Both popes also knew that, to survive and thrive, a people must have a land. Though in recent times Jews had individually become integrated in many countries, the Holocaust made it clear that collectively they need self-determination to be able to live with dignity. The Vatican’s recognition of the State of Israel helped to affirm it.

Despite the canonization of the two popes who recognized not only Judaism but also the Jewish people — and with that the Jewish state — many rank-and-file members of the Catholic Church, and even more so members of other Christian denominations, still find this difficult to accept. Hence, in the eyes of many, their hostile attitude to Jewish sovereignty.

Christians who see Israel only as the Holy Land struggle when called upon to affirm the Jews as a people and Israel as the Jewish state. Pope Francis may help them when he visits Israel later this month.

Posted by hereisjorgebergoglio at 2:46 PM