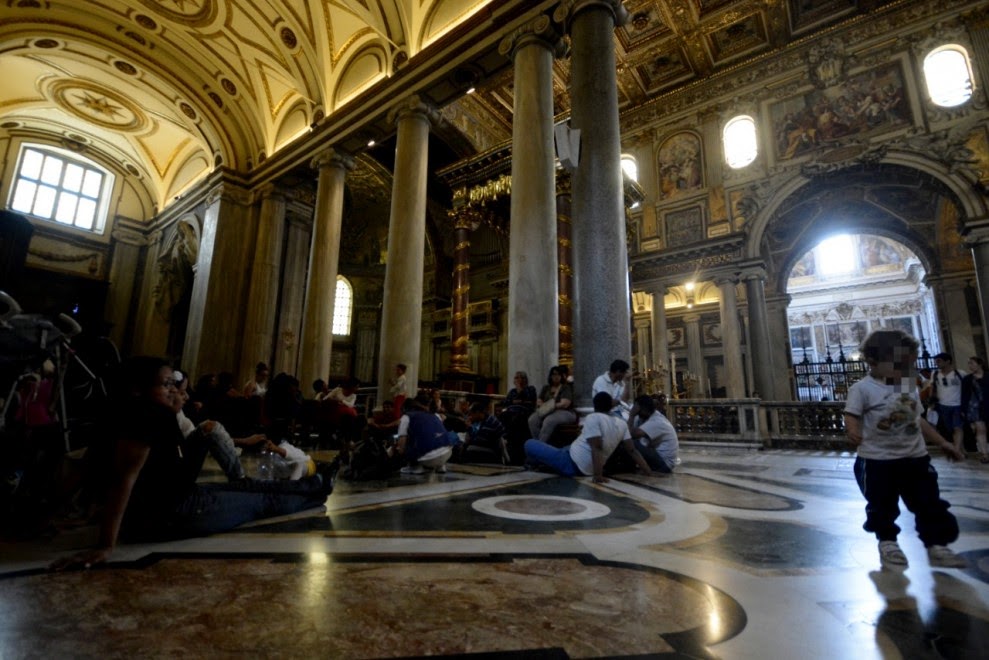 The homeless have moved into the papal basilica of Santa Maria Maggiore.

Santa Maria Maggiore in Rome is being occupied by a group of 150 squatters. This basilica was the first stop Francis made after his two trips abroad to Brazil and to the Holy Land.  He also went there and prayed before he departed for Jordan.  If one recalls after Brazil World Youth Day 2013, Francis infamously placed a beach ball and jersey on the high altar at the basilica as his act of thanksgiving. (click here, Gifts for the Blessed Virgin Mary)  Francis has constantly harped on immigrants, people on the fringes of society, the unemployed, and the homeless. In September 2013 Francis visited the Astalli Refuge Center and listened to the heartbreaking stories the refugees had to tell.  In a speech there, Francis said,


"Dear men and women religious, empty convents are not for the Church to transform into hotels and make money from them. Empty convents are not ours, they are for the flesh of Christ: refugees. The Lord calls us to be generous and courageous in welcoming people into empty convents. Of course this is no simple task; discernment and responsibility are required; but courage is also needed. We do a great deal; perhaps we are called to do more, by welcoming and sharing what Providence has given us to serve others, with determination."

Or who can forget the homily he gave to the illegal Muslim immigrants on the Island of Lampedusa? 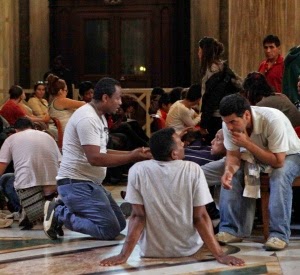 The 150 squatters come from Morocco, Algeria, Bangladesh, Ukraine, Romania, several South American countries, and a few from Italy. They had been illegally squatting in an abandoned building, Torre Spaccata 172 for several months until the police and fireman kicked them out. All of the squatters claim to have lost their jobs in the economic downturn which has hit Italy. Having no where to go but the streets, they determined after hearing Francis' words to move into his favorite Basilica. This took place on 4 June 2014. The homeless squatters are finding little attention from humble Francis but at least he hasn't kicked them out...yet.


But many said that they had received no food, water or help from the custodians of the imposing church, which is owned by the Holy See and lies on Vatican-controlled land a few kilometres from the Pope's apartment and St. Peter's Basilica.

"I'm a practising Catholic but I'm very disappointed with Pope Francis," said Nelly Mero, 32, an Ecuadorean immigrant, whose husband lost his job in a construction firm in Rome. She lost her place selling clothes in a market.

"I don't expect the Vatican to come up with a solution, because it is the responsibility of the city council, but he has not intervened or said one word about us," said Mero, who is living in the church with her two children, aged five and two.

Below is the letter they wrote to Francis, as they want him to be their advocate to the Italian government.


"We face every day of our lives trying not to lose our humanity, to resist the harassment to which we are subjected to because of our social condition. They call us the marginalized, the poor and the outcast but we know the sacredness of our lives. We are here, in the house of God, to ask for help. The Italian Government, through the House plan just approved, not only chose not to make a solution to the housing crisis which we and many others (suffer), but we are obliged, under Article 5, (they) chose to declare war on those who, like us, have not had the good fortune to live in owned homes and were forced, left only by the state, to take refuge in abandoned structures."

"...yesterday morning we were driven out as the worst offenders. They came with trucks and helicopters, armed with helmets and batons, broke down the doors and we were thrown into the street without giving us any workarounds. The mutual solidarity that binds us and that we sustain during this difficult time, is allowing us to remain human. The Italian State, after having abandoned us chose to destroy us and those living in our own condition. We ask for your help. We are afraid for us, and especially for our children, but we are not willing to give up, because the only solution proposed by the City of Rome is the separation of families. We know that you can understand our situation perfectly. You are only a man like us, came halfway around the world, has always been sympathetic to the suffering of the past but, like Jesus Christ, unavailable to accept it passively, today represent our greatest hope in a world where we can not see the future possible for us and for those like us, in Rome and in Italy, experiencing the drama of the housing and marginalization. "

"We ask you to receive us, to make (us) your wounds (which) we carry on our bodies, to become our strong voice against these policies inhuman and dehumanizing, our enemy and contrary to what is taught by Jesus Christ, even to those who believe in another God We ask that you welcome us into your arms, we ask you to grant us political asylum as a human being, persecuted, harassed and humiliated by the Italian State. "


Is this all a part of the "poor church" or Francis' New Evangelization?  He could pick up the phone and call either don Luigi Ciotti (read, Compassionate Francis?) or Don Michele De Paolis (read, Yes Jimmy, he did!) as both have foundations which help the homeless and have this situation resolved quickly.  The question is will he?  Remember dear reader, if you are in Rome on vacation and you drop into the Basilica di Santa Maria Maggiore you can see the future of not only of the Novus ordo church but also the future of Europe. 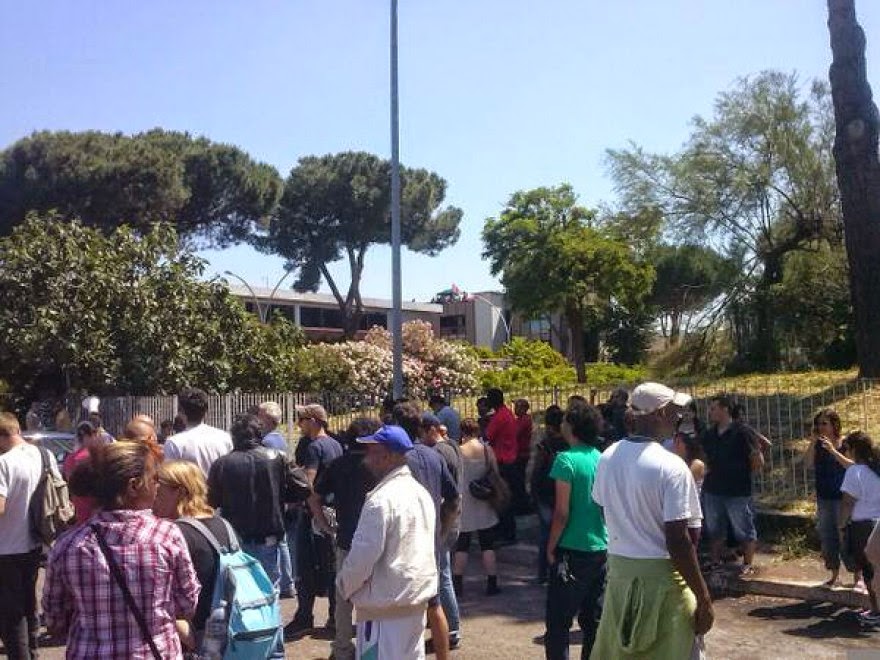 Getting evicted from Torre Spaccata 172. 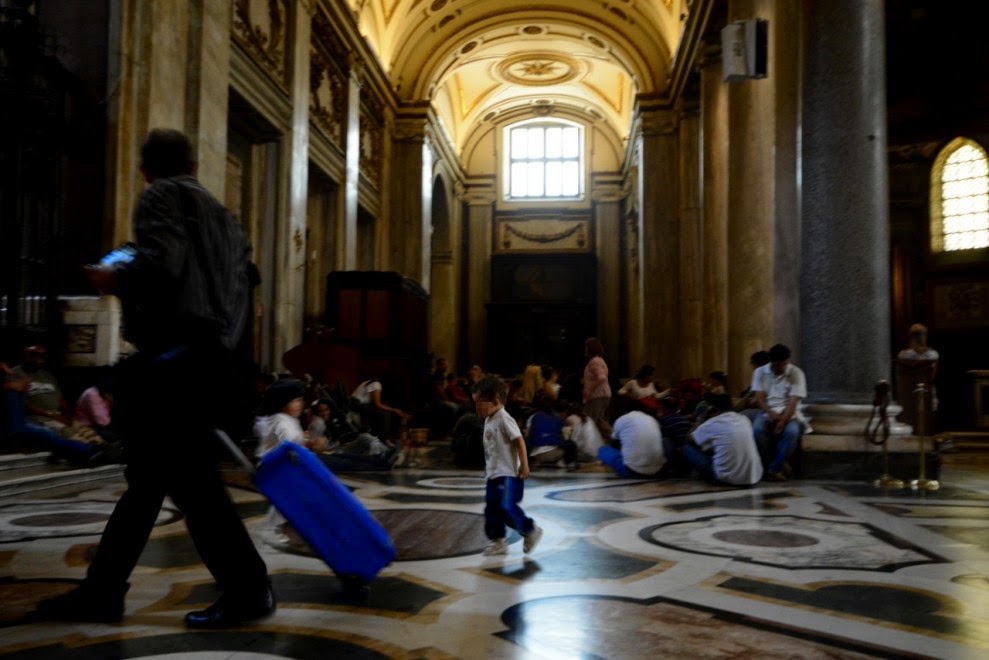 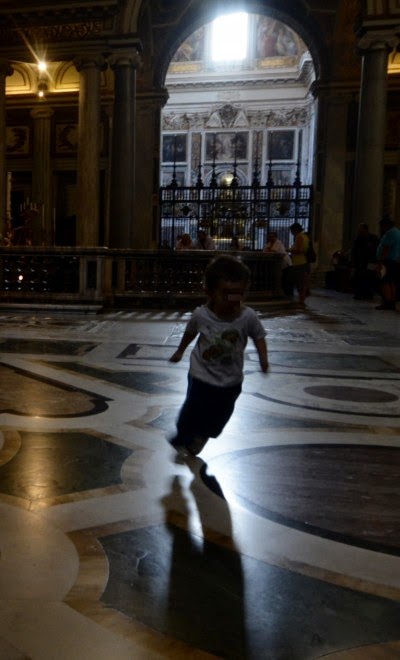 A church is a place to run around and play games! 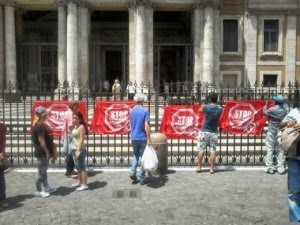 Signs on front gate of Basilica demanding evictions STOP!
Posted by hereisjorgebergoglio at 5:17 AM