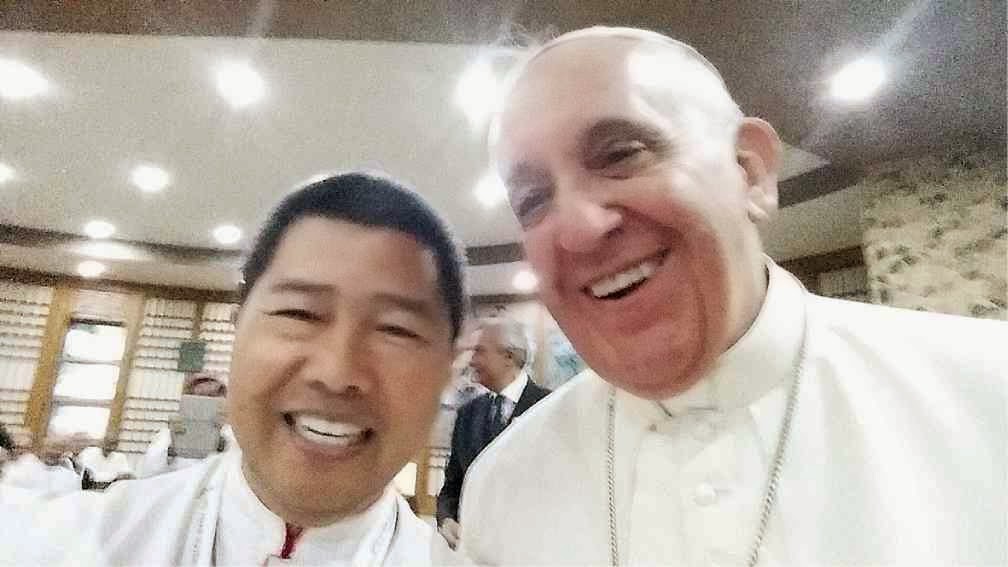 Bishop Joel Baylon takes a selfie with his idol, Francis.
Why selfie with Pope Francis a big deal
By Michael B. Jaucian

To have an idea of how it is to interact with Pope Francis, ask the bishop of the diocese of Legazpi City.

“It was really like I’m in heaven,” said Bishop Joel Baylon, describing how he felt being up close, and personal, with Francis.

Baylon, interviewed at the chancery of the Legazpi diocese on Aug. 25, said the chance to meet the Pope came on Aug. 17 when Francis spoke before at least 50 Asian bishops taking part in the Asian Youth Day in Daejeon in South Korea.

High-ranking Philippine Church officials were there, like Cardinal Luis Antonio Tagle and Archbishop Socrates Villegas, head of the Catholic Bishops’ Conference of the Philippines. Four other Philippine bishops were there, too.

What set Baylon apart, however, was his excitement over being close enough to the Pope that he could seize the chance to do what many a star-struck fan would in the Internet era— take a selfie with his idol.

According to Baylon, second thoughts swirled in his mind over the idea of having a selfie with the Pope. First, the 60-year-old Baylon thought he was “too old” for it. Second, wasn’t he supposed to be prim and proper before the leader of the Catholic world?

The urge to have a selfie with Francis prevailed in the end and the chance came—a one-minute conversation with the Pope.

“Actually, I used two strategies to get his yes for a selfie— give him a rosary and speak in the Spanish language for I know he’ll understand it better than my English,”  Baylon said.

One of the teachings of Jesus proved true for Baylon, the one that says he who is first would be last and he who is last would be first.

Baylon cut the queue of bishops waiting to talk with the Pope not to get ahead, but to be the last in line. He was supposedly third in line, but Baylon thought being the last in a queue of six bishops would give him more time with Francis.

He who is last would be first,  so Jesus said in reference to how humility could exalt the humble. It proved true for Baylon.

When his turn came, Baylon said he immediately took a rosary from his pocket and told Francis: “This is a rosary from a friend who is suffering from depression who wants you to please pray for her.”

“Upon seeing it, the Pope blessed it without knowing it was already blessed,”  Baylon said.

“After blessing it, he (Pope) returned it to me,” he said.

“Then the Pope asked me,” continued Baylon, “where are you from?”

Baylon said in his excitement he forgot to introduce himself but was able to produce his ID and tell the Pope “I’m from the Philippines, diocese of Legazpi, about 500 kilometers away from Manila.”

“Then that was it,” Baylon said. “When I got his attention I automatically asked him the second favor. I got my mobile phone, which I kept under my shirt, and said again in Spanish, ‘Santo Papa, segundo pabor,’ like those youth.”

He said that when the Pope saw the phone, Francis said “selfie, selfie,” and Baylon replied “si, si (yes, yes).”

From the moment Baylon took his phone out and was framing a shot, all eyes were on him. All the while, the Pope was laughing.

“I took five shots. I was shaking when I took the photo. I took the opportunity. He was all smiles, really accommodating,” Baylon said.

“In my extreme enthusiasm, the Pope laughed and I thanked him by embracing [him] and [I] got a very tight hug in return,” he added.

Asked how he felt after the Pope’s embrace, Baylon said, “It’s really like I was in heaven. I was teary-eyed because of joy.”

Baylon said the Pope “is not somebody you will find difficult to approach.”

“He is very accommodating, accessible. He is somebody who really likes to be with people,” Baylon said.

Posted by hereisjorgebergoglio at 2:24 AM