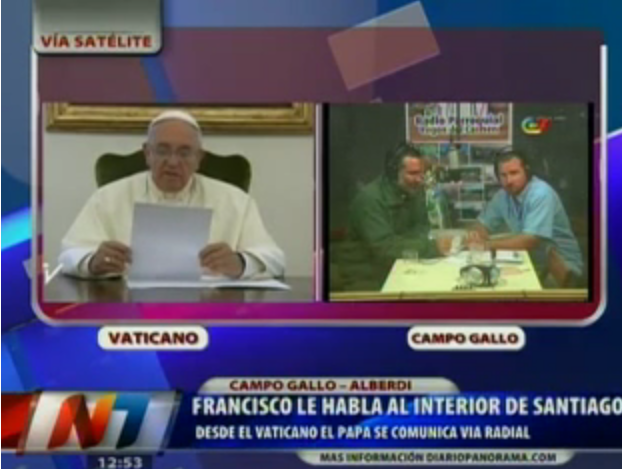 
For those readers of Call Me Jorge... who cannot read Spanish, following is the Catholic News Agency's article, Do not fear the call of Jesus, Pope says in radio interview, on the subject.


Do not fear the call of Jesus, Pope says in radio interview

In a 20-minute live interview on an Argentinean radio station on Aug. 8, Pope Francis encouraged young people to fearlessly answer God’s call to selfless love through a vocation.
“Each person has a role, each person has a job to do, a vocation,” the Pope said. “Pray that God sends workers to the harvest, that he sends shepherds.”
“Young people who feel the call of Jesus should not be afraid,” he continued, explaining that life is “not for achieving gains. Life is for giving it away.”
“If someone is feeling that God is asking him to give his life in the priesthood, he should not be afraid. We need to gamble on big things, not on little ones. And if he feels that Jesus is calling him to form a family, let it be a strong, big, Christian family.”
The Pope’s remarks came during his radio conversation with Father Joaquin Giangreco and Father Juan Ignacio Liebana on Radio Virgen del Carmen in the Diocese of Añatuya.
In addition, the pontiff touched the importance of prayer, saying, “The Church is sustained by the prayers of the faithful, by prayer, by the Mass.”
He also noted that “there will always be differences, there will always be fights, but they need to be discussed. They need to be discussed with God.”
He warned that “destructive criticism” of others causes harm and “is not Christian.”
Pope Francis later said, “Jesus is so good. Jesus loves us. God loves us. God waits for us always. God never tires of forgiving us. Let us just be humble and ask for forgiveness, in order to continue forward. God made us to be happy. God is with us.”
“When we go through times of sorrow, he experienced them first. And he understands us from the heart. I ask the Lord God to bless you a lot, that He grant you the courage not to let your hope be stolen and above all that He touch you and make you smile.”
In conclusion, the Holy Father imparted his blessing on all the listeners, and when the connection was lost, he called back to say goodbye to the two priests who interviewed him.

Posted by hereisjorgebergoglio at 2:02 AM