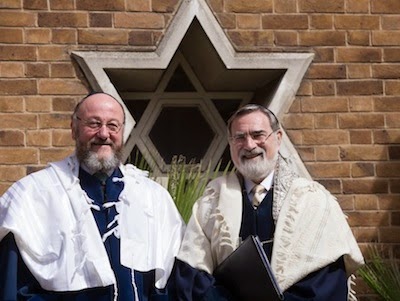 Catholics must atone for their anti-Semitism

Hatred of the Jews has never gone away, and we must do everything to resist its return


I am not Jewish, but when the Chief Rabbi speaks, I listen.

The former Chief Rabbi, Lord Sacks, had some cogent things to say about, for example, gay marriage: his statement on the subject was the best I read, and left me wishing I had said that myself. He was a consistent and convincing exponent of the value of marriage and family life for the well-being of society, something that everyone, Jew and Gentile, should appreciate. Moreover, Lord Sacks spoke eloquently about the plight of the Christians in the Middle East, a subject on which others have elected to keep silent.
Now his successor, Chief Rabbi Mirvis, has spoken about the rise of anti-Semitism, and this too commands our attention.  His reasoned and reasonable approach to the question makes points that no one can seriously disagree with; but herein lies the problem. Anti-Semitism has never been a reasoned creed; it is in fact a psychosis, which contradicts and rejects all reasoned approaches. The anti-Semite is never interested in evidence, but only interested in wild and unfounded conspiracy theories.
One interesting (if that is the word) sign of this is how anti-Semitism is often to be found in countries were there are few Jews, and among people who have never known a Jew. I myself was once handed anti-Semitic literature outside a mosque in Turkey, which has a small Jewish population of roughly 17,000 . We have recently been told that the world’s most anti-Semitic country is Greece, which has an estimated Jewish population of 4,500, and which, sadly, was the locus of one of the worst episodes in the Holocaust, the wholesale extermination of the Jewish population of Thessalonica.
Why should this interest readers of The Catholic Herald?
First of all, when Chief Rabbi Mirvis speaks of the Jews as canaries down the mineshaft, he is correct. If we sit back and let the anti-Semites set the agenda then we legitimise the worst type of national discourse, and we legitimise, tacitly, the demonisation of other minorities, such as ourselves. It is worth remembering the famous poem by Pastor Niemoller, because it is as relevant now as when it was first written:
First they came for the Socialists, and I did not speak out—
Because I was not a Socialist.
Then they came for the Trade Unionists, and I did not speak out—
Because I was not a Trade Unionist.
Then they came for the Jews, and I did not speak out—
Because I was not a Jew.
Then they came for me—and there was no one left to speak for me.
We Catholics often complain about the way we are misrepresented, and others complain that we complain. But we can hardly claim misrepresentation for ourselves and ignore the way the Jews are being treated by certain elements. If we are against lies, then we have to be against the lies told about everyone. We cannot be selective. We have to stand up for truth. Truth is not bound by space and time.
Given that Catholics have suffered persecution in Britain, this should make us particularly sympathetic to other religious groups who might be suffering in the same way.
There is another reason too. Historically, there have been Catholic anti-Semites. We need to repent for this, and we have done so, not least through the words of St John Paul II.  We must be clear that this is one Catholic tradition that we do not hold to, and we need to remember that the Church evaluates traditions critically: only good traditions are normative. Moreover, even today, there are Catholic anti-Semites, and we need to tell these fellow Catholics of ours that their anti-Semitism is not rational, but rather deeply sinful. Hatred is never good.
Who are the Catholic anti-Semites? Here we must tread with caution. Some of them are people who, for whatever reason, are tempted to give way to irrational explanations for the way the world is, as a way of holding reality at bay. These will often be the same people who have ideas about the Freemasons, the Bilderburg group, the CIA, and so on. They do not have hostility to Jews as such (they don’t know any) but they have a hostility to the world, and seek some grand unifying theory to explain their sense of alienation from the world. They are not bad people as such (though their views are bad and can do great damage) but they are deluded and do need help.
Moreover, there are some splinter groups, some of which are in a dubious canonical position, which seem to be wedded to anti-Semitism. The Church needs to treat these splinter groups with the very greatest of caution. It is always difficult to name names, because to accuse someone of anti-Semitism is a serious matter, but the actor Mel Gibson has been recorded as making anti-Semitic statements, and is often identified as a Catholic, though his canonical status looks questionable to me, to say the least. Mr Gibson, who has distanced himself from his remarks, strikes me as an exponent of a tendency on the fringes of Catholicism that must be strongly discouraged. Again, we can ask legitimately why the Society of St Pius X provided a funeral for the notorious war criminal Erich Priebke?
All this raises the question what the institutional Church can do about people who call themselves Catholic but over whom the bishops have no authority. I suppose the only answer is that we must make clear our abhorrence of anti-Semitism in all its forms and anything that seems to smell of anti-Semitism. We must drown out lies with the water of truth. And we must be extremely careful in our own utterances, to make sure that we do not give way to this irrational psychosis.

Posted by hereisjorgebergoglio at 7:05 AM