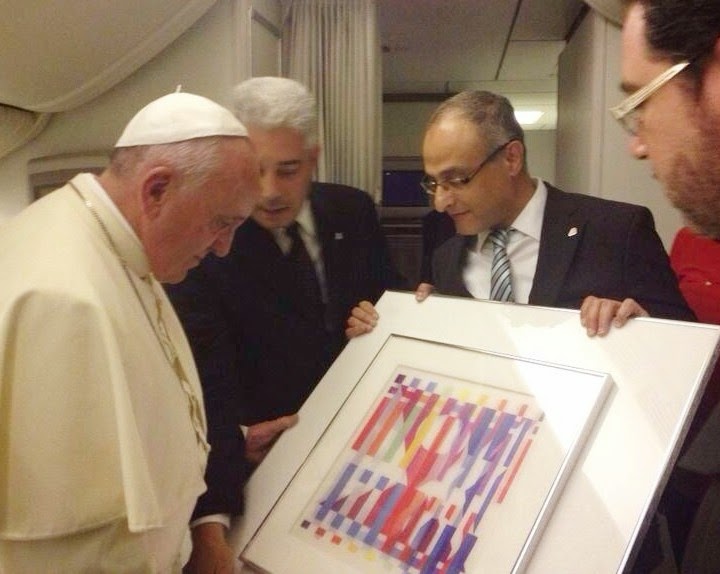 Several things are worth mentioning about Yaacov Agam's upbringing before we write of the artwork which was given to Francis.  Yaacov's father Yehoshua, was a rabbi and a noted kabbalahist.  Agam was educated at a Talmudic religious school until he dropped out and his father hired a melamed (religious teacher) to tutor him at home.  Of his art Yaacov says,


"I don't pray with words, I pray visually.  My works are, so to speak, a visual prayer."

Another interesting connection is the one with the Guggenheim family whom have helped Agam by purchasing his artwork and holding shows to promote his artwork at their museums.  The Guggenheim family was also responsible for bringing famous author Malachi Martin to America as well as bringing Marc Chagall to America.  Chagall is the artist responsible for Francis favorite piece of blasphemous artwork White Crucifixion.

The work 'Faith-Visual Pray' by Yaacov Agam is in the color of the noahide rainbow.  Much of Agam's artwork uses the rainbow.  It contains the Magen David, the emblem of Zionism, and a  Menorah, which brings to mind the Talmudic tale of god being pleased with the Jewish people and their vainglorious celebrations.  Many towns and cities around the world have a public menorah dutifully put up by various Chabad-Lubavitch branches.  Agam is responsible for building the world's largest chanukah menorah for the Lubavitchers which is erected in New York City every year on at the corner of Fifth Avenue and 59th Street.  The menorah is also the symbol of the Mossad, the intelligence and special operations division of Israel.  The work's message is that if Christianity will tolerate (be subservient to) Talmudic Judaism (by obeying the noahide laws) the messiah will come again.  This isn't first time one of Agam's works has been given to a pontiff.  In 2004, the Anti-Defamation League's Abe Foxman presented Saint John Paul II a piece titled, 'Visual Prayer for Mutual Hope'. 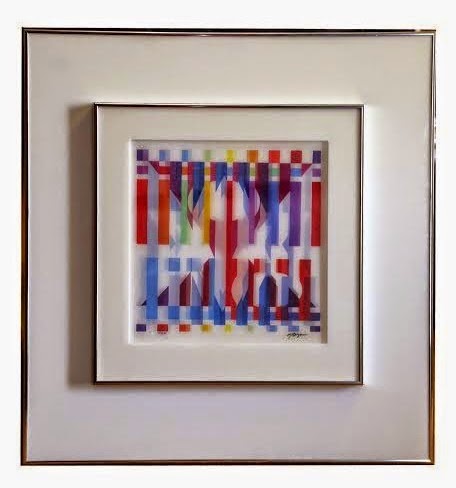 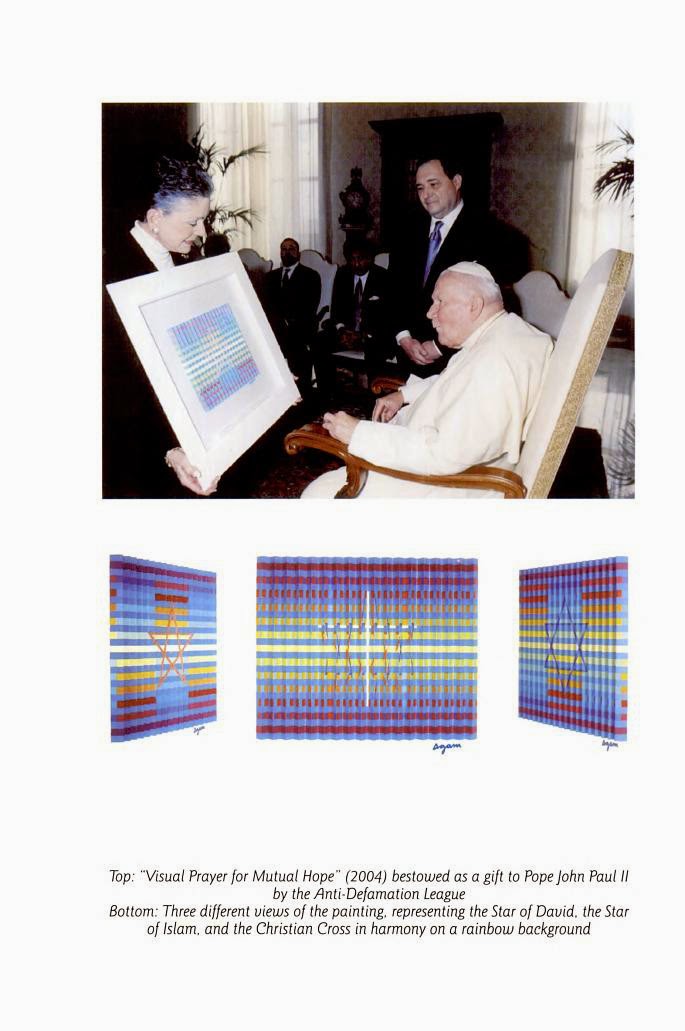 page 208 from Agam: Beyond the Visual


When Pope Francis, and the hundred Vatican officials and international journalists who accompanied him to the Holy Land, boarded the specially outfit El Al Israel Airlines Boeing 777 flight LY514, clad with the Pontiff’s coat of arms, for the return flight to Rome on Monday, airline president David Maimon showered him with gifts.

A published book of greetings and messages sent via social media from El Al passengers around the world, a bottle of Altitude 720 kosher wine from Barkan Winery affixed with a special label with the date and flight number of the historic voyage, and a painting by 86-year-old Israeli artist Yaacov Agam called, ‘Faith-Visual Pray.’

Maimon told the Pope that the artwork integrated symbols of Judaism, including the Star of David and the Menorah, symbolizing the Holy Temple of Jerusalem and the seven churches of Christianity.

In an exclusive interview, Agam, one of the pioneers of the kinetic art movement, told The Algemeiner the story behind the special painting.

“El Al wanted to give the Pope a gift, and they looked to different galleries, and this was in Art Market,” a gallery in the port of Tel Aviv, he said.

“They chose this work of art because it expresses this idea, the feeling of being Jewish,” he said.

“The art work is very significant because you see the rainbow, and the rainbow is the expression of color. And the beauty of the rainbow is symbolizing – you have red and blue and yellow and violet. You have all the different colors, and they tolerate each other. And all together, they make a beautiful thing – a rainbow.”

“And this is symbolizing the world – if we tolerate each other there will be a great peace in the world and Moshiach [the Messiah] will hopefully come,” Agam said.

“At the same time, it represented some of the most Jewish values and also represented the State of Israel, with the Magen David [the Star of David] and the Chanukiah [Menorah], with seven branches, and there are also the seven branches of Christianity,” Agam said.

In Israel, where everything is imbued with ancient ideas, El Al said that nearly 66 years ago, when the decision was made to establish a national airline, in search of an appropriate name, they turned to the Bible for inspiration and chose “El Al,” from the book of Hoseah, signifying “to the most high.”

Posted by hereisjorgebergoglio at 8:17 AM