Whew!!! Francis is back up to full speed!

This morning Francis was asked by Shimon Peres to be a head of a new organization, a United Nations for Religions because, "perhaps for the first time in history, the Holy Father is a leader who's respected, not just by a lot of people, but also by different religions and their representatives."  Francis was non committal in his reply to Peres.

Then Francis went on google hangout to promote Scholas, an NGO, which also was one of the two main sponsors for his Interfaith (soccer) Match for Peace.  There he chatted with students from around the world and acted as Francis only can.

It looks like an intimate setting doesn't it?  The reality was far different.  Francis did this in a college style lecture room filled with reporters.  Nothing denigrates the papacy like stooping to broadcasting on a webcam to raise money for one of those NGOs you love to complain about in your general audiences and homilies.  Earlier this week it was a cartoon with Disney character Plim Plim and now webcamming?  We at Call Me Jorge... fear the surprises Francis schemed during his vacation and has in store for us. 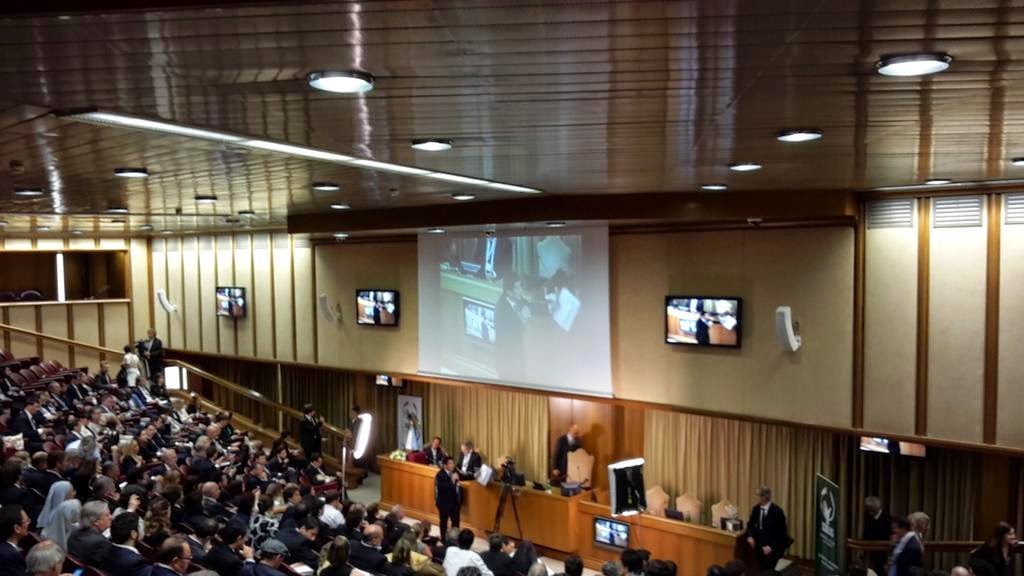 Reporters awaiting the arrival of Francis for his webcam show.

Rounding out the rest of Francis' day was his meeting with a fellow interfaith super-star and a prince of Jordan, El Hassan bin Talal,


a modernist sermon in Casa Santa Marta with the key word being 'encounter',


and finally another meeting with the 'hand of God' himself, Diego Maradona!
Posted by hereisjorgebergoglio at 8:48 AM