a prophecy about the papacy by a saint

The other day we posted a Catholic saint's letter to his son.  Today we post a prophecy by a Catholic saint, whose name Jorge Mario Bergoglio coincidentally choose to take after he was elected to the papacy.  When asked why he chose the name, Francis, at his Audience with the Representatives of the Communications Media on 16 May 2014 in the Paul VI Audience Hall, Francis said,


Some people wanted to know why the Bishop of Rome wished to be called Francis. Some thought of Francis Xavier, Francis De Sales, and also Francis of Assisi. I will tell you the story. During the election, I was seated next to the Archbishop Emeritus of São Paolo and Prefect Emeritus of the Congregation for the Clergy, Cardinal Claudio Hummes: a good friend, a good friend! When things were looking dangerous, he encouraged me. And when the votes reached two thirds, there was the usual applause, because the Pope had been elected. And he gave me a hug and a kiss, and said: “Don't forget the poor!” And those words came to me: the poor, the poor. Then, right away, thinking of the poor, I thought of Francis of Assisi. Then I thought of all the wars, as the votes were still being counted, till the end. Francis is also the man of peace. That is how the name came into my heart: Francis of Assisi. For me, he is the man of poverty, the man of peace, the man who loves and protects creation; these days we do not have a very good relationship with creation, do we? He is the man who gives us this spirit of peace, the poor man … How I would like a Church which is poor and for the poor! Afterwards, people were joking with me. “But you should call yourself Hadrian, because Hadrian VI was the reformer, we need a reform…” And someone else said to me: “No, no: your name should be Clement”. “But why?” “Clement XV: thus you pay back Clement XIV who suppressed the Society of Jesus!” These were jokes. I love all of you very much, I thank you for everything you have done. I pray that your work will always be serene and fruitful, and that you will come to know ever better the Gospel of Jesus Christ and the rich reality of the Church’s life. I commend you to the intercession of the Blessed Virgin Mary, Star of Evangelization, and with cordial good wishes for you and your families, each of your families. I cordially impart to all of you my blessing. Thank you.


Without further ado here is the prophecy of St. Francis of Assisi, great Schisms and Tribulations in the Church.  It is up to the reader/listener to decide if this is about the current papacy.  Thanks to Fiel al Evangelio over at Gloria.tv for posting these two videos.


Scanned in pages of the book 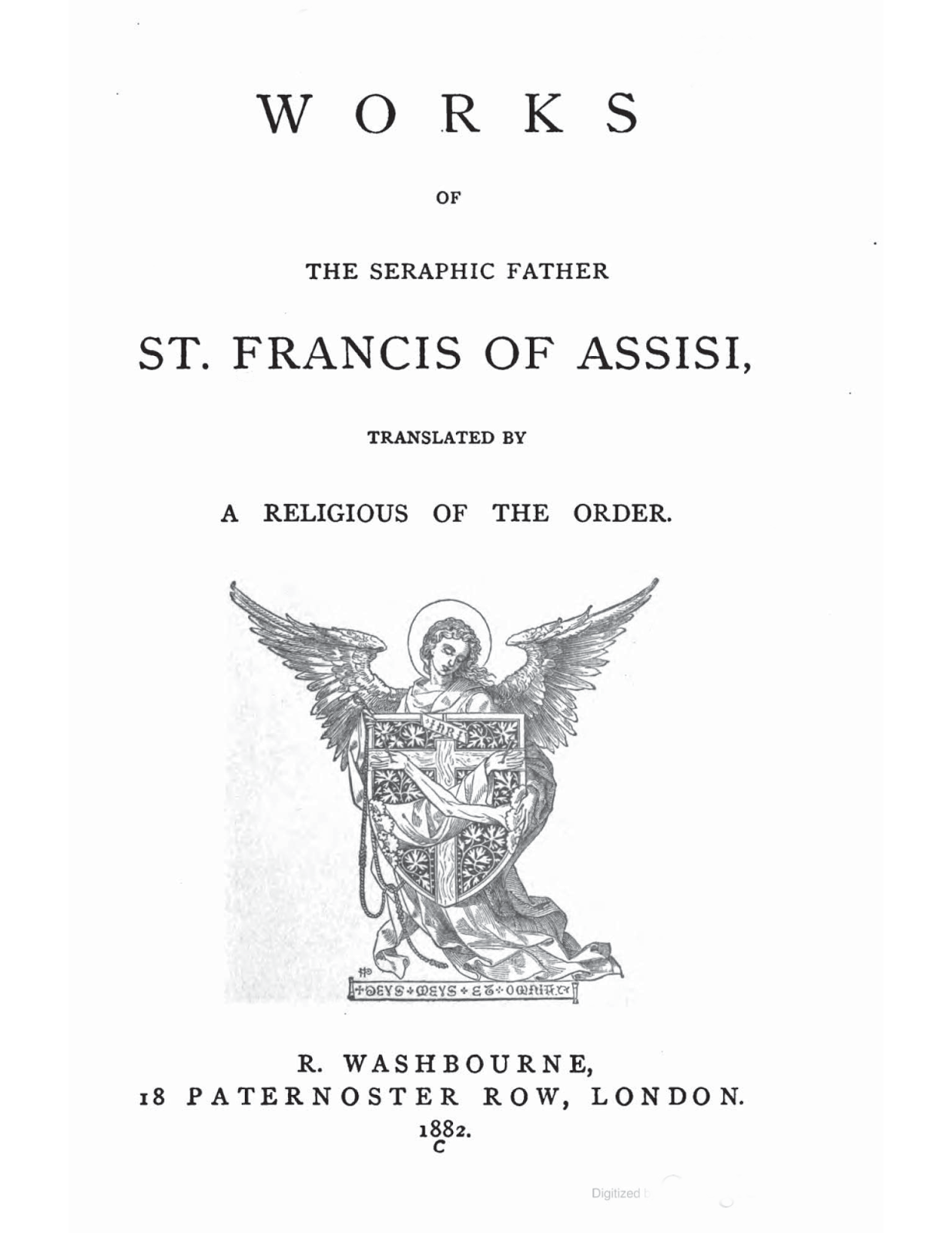 title page of Works of St. Francis of Assisi 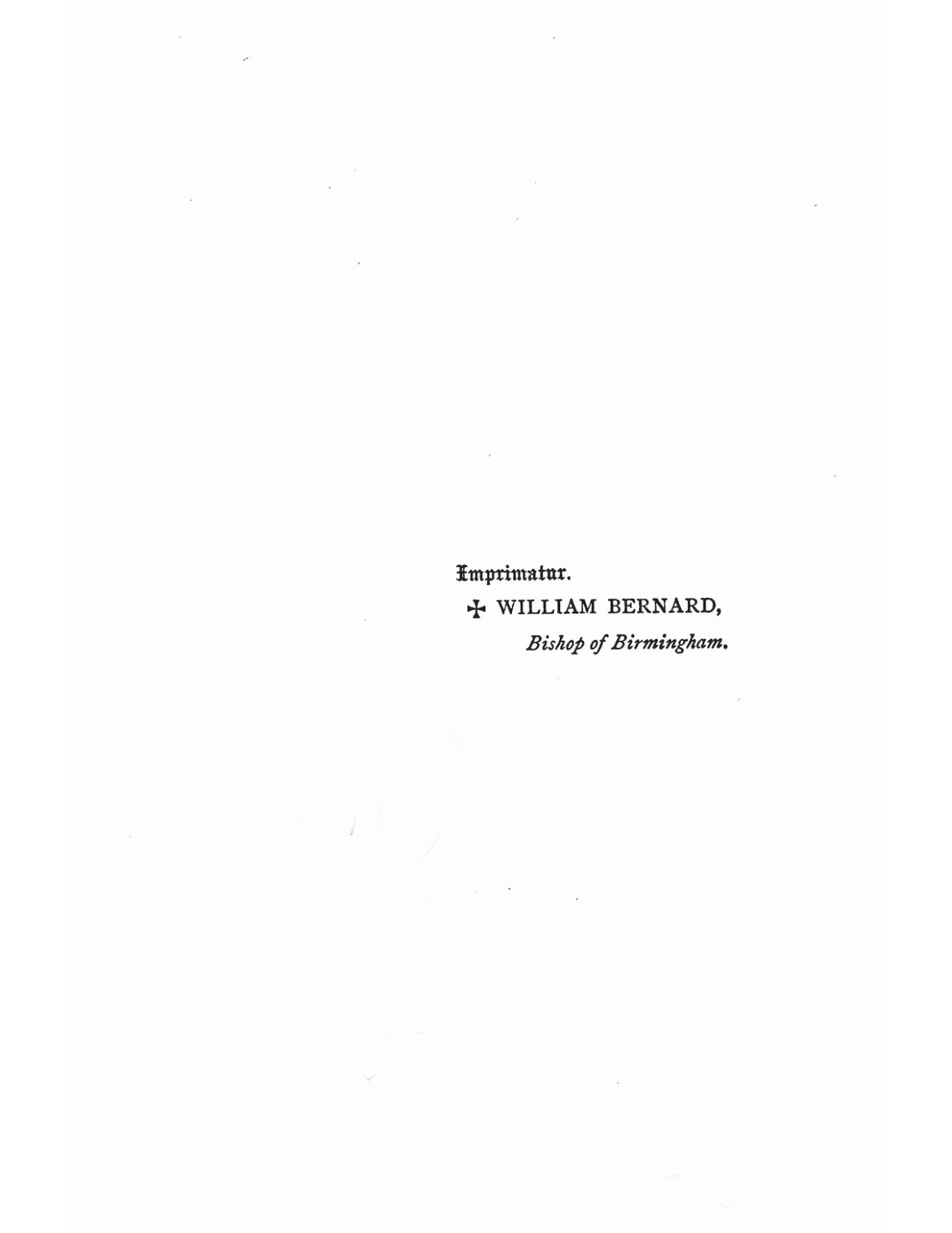 imprimatur page of Works of St. Francis of Assisi 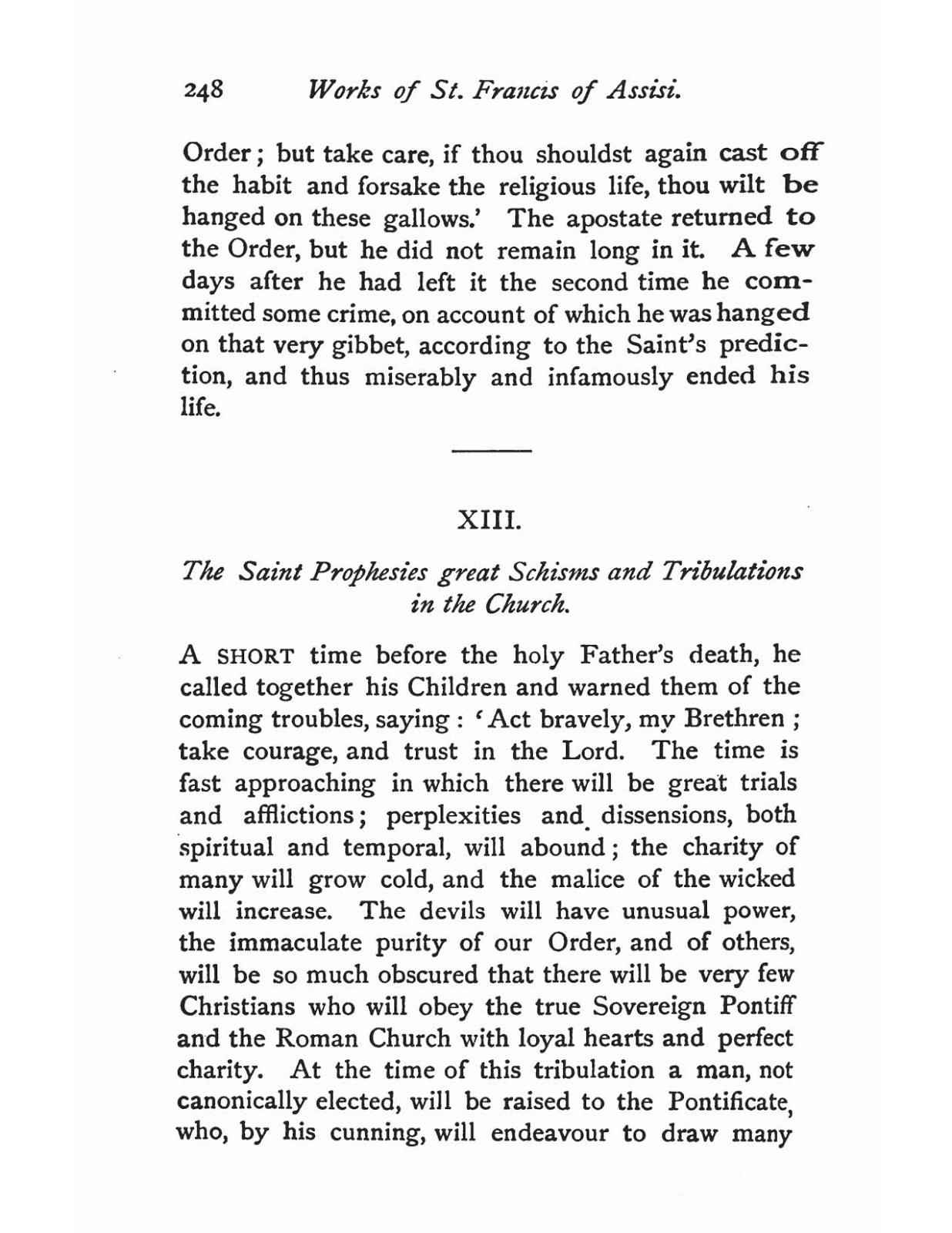 page 248 of Works of St. Francis of Assisi 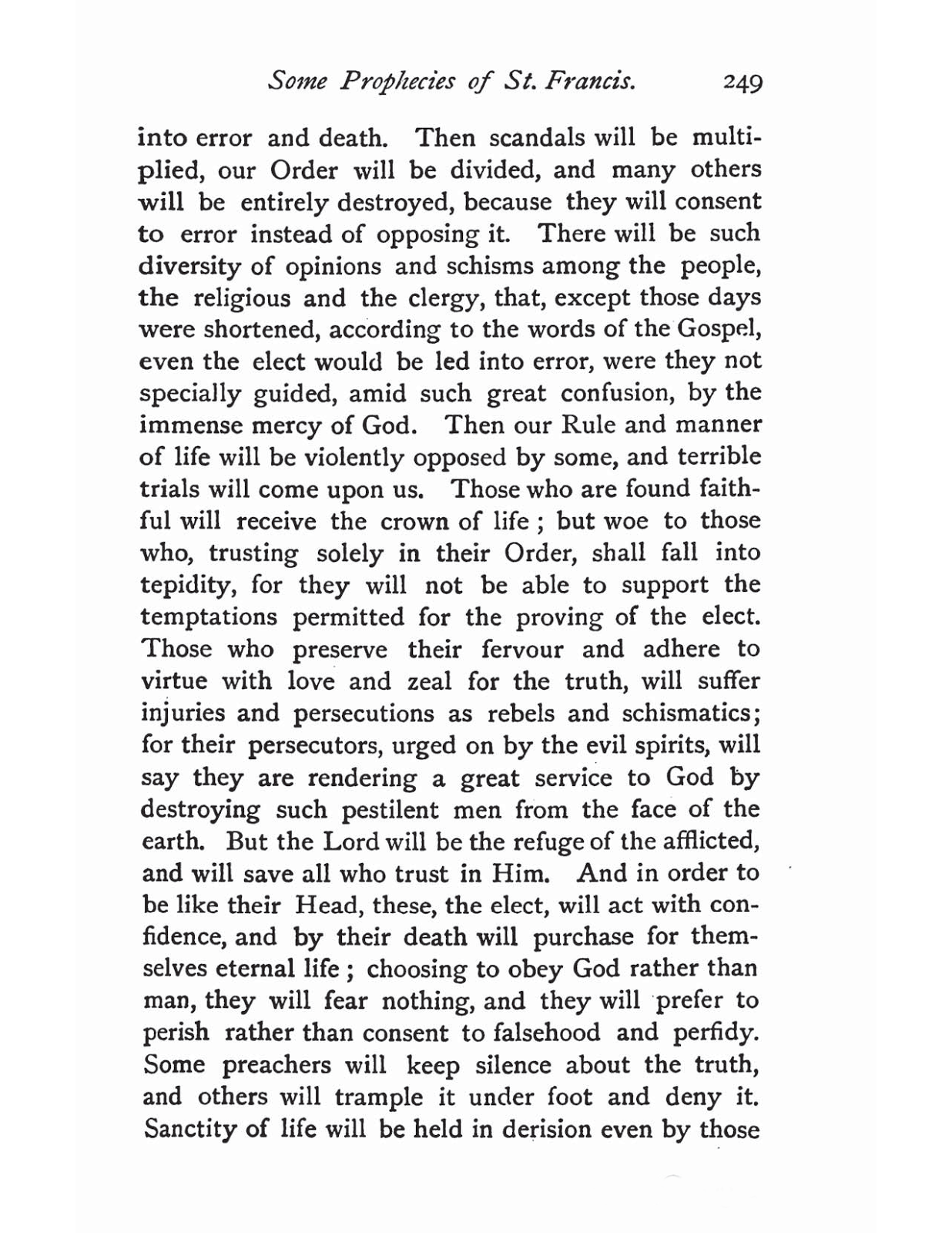 page 249 of Works of St. Francis of Assisi 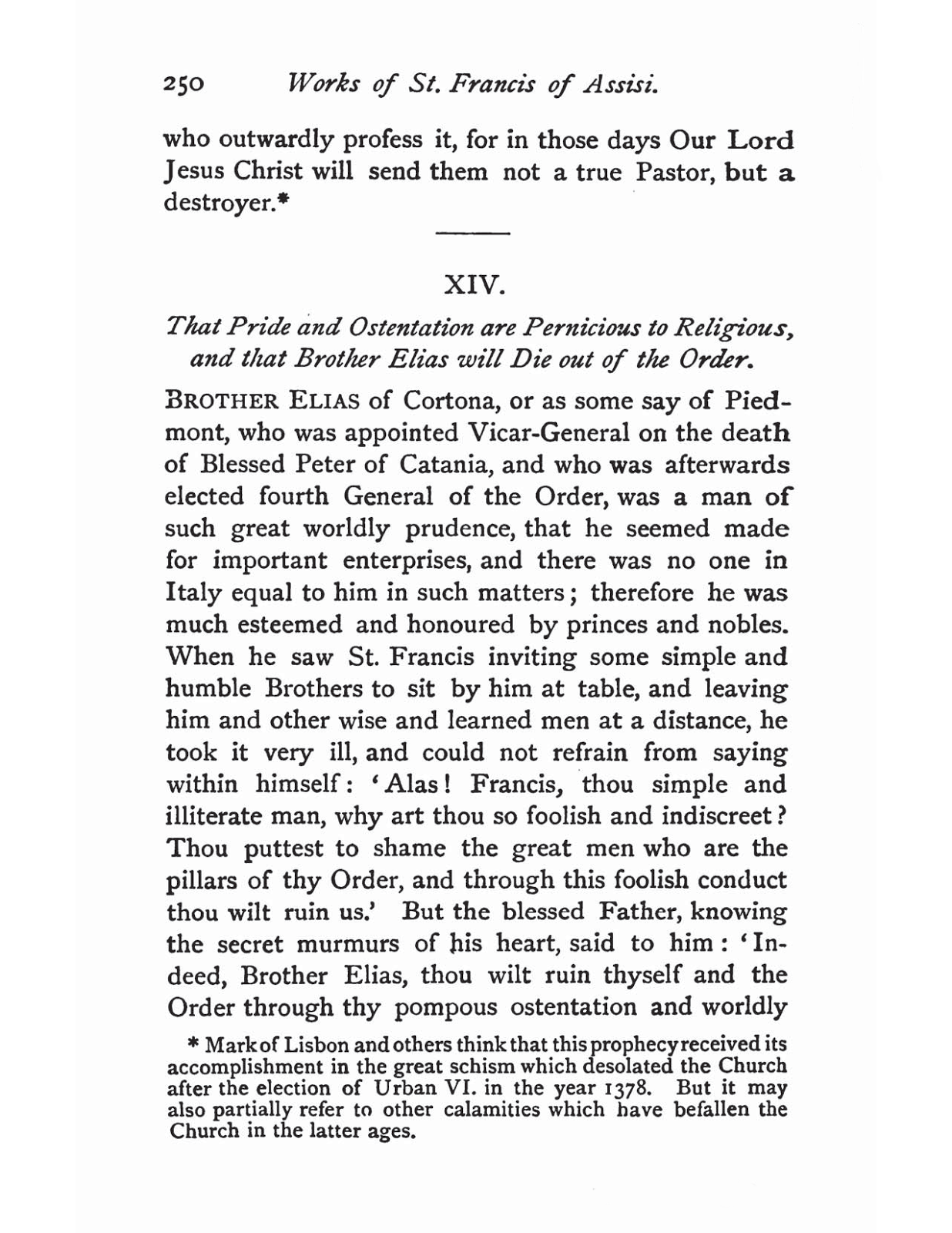 page 250 of Works of St. Francis of Assisi
Posted by hereisjorgebergoglio at 9:19 PM

Email ThisBlogThis!Share to TwitterShare to FacebookShare to Pinterest
Labels: great Schisms and Tribulations in the Church, Jesus Christ, not a true Pastor but a destroyer, papacy, prediction, prophecy, St. Francis, St. Francis of Assisi