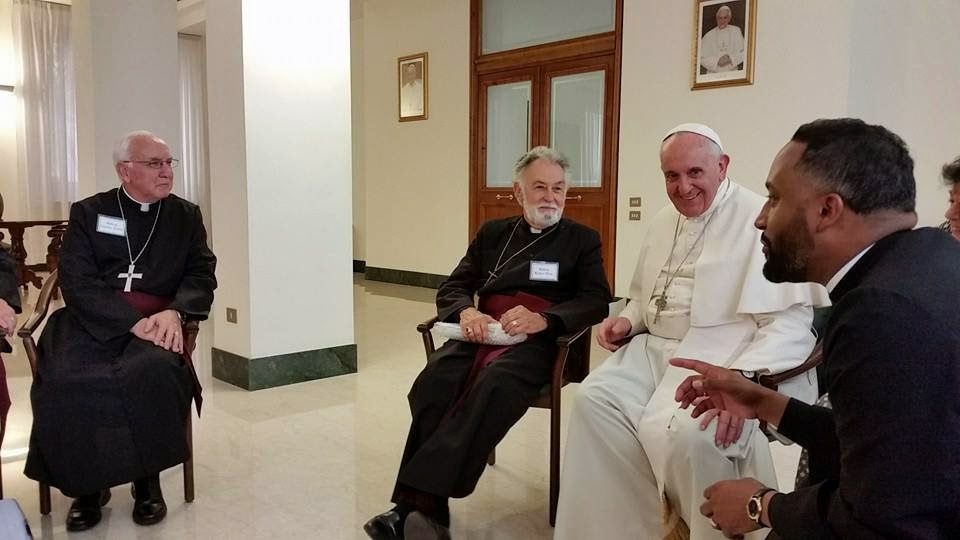 Robert Wise is, first and foremost, a storyteller. Growing up as a child adopted from a Jewish family that knew the Nazi Concentration Camps  Robert was always intrigued by stories of injustice. In an attempt to bridge the gap between secular and Christian markets, Robert writes to motivate his readers not only to empathy and compassion, but also to act and join the struggle against injustice. (source)

I have just returned from two weeks in Rome and time spent in private discussions with Pope Francis. As you may be aware, the Vatican was holding a landmark assembly dealing with issues facing families, divorced and remarried Catholics, as well as the gay community. During this time, the Pope met privately with me at an early morning hour to discuss bringing a new unity between Protestants and Catholics. Since I am a Protestant Archbishop, such conversations were highly irregular – and vital!

The Pope had become our close friend when he was Archbishop of Buenos Aires, Argentina. Tony had become like a son to Fr. Bergoglio (now Pope Francis). As their relationship developed, Tony and I were shocked when the Archbishop became the Pope after Benedict resigned. Last spring, the Pope called on his cell phone and asked us to come to Rome. He particularly wanted us to carry the message of “unity without uniformity” to the Protestants world. The Pope wasn’t asking Protestants to join the Roman Church, but wanted Protestants and Romans to become friends again as well as brothers and sisters as Jesus prayed we would  all be. (John 17)

On July 20, 2014, at the age of 48 Tony was tragically killed in a motorcycle accident in Bath, England. Obviously, this tragedy threw our worlds into complete turmoil. Although I had retired as Director of Ecumenical Relations of the Communion of Evangelical Episcopal Churches, I was called back to help formulate a Synod Tony was working on in Rome and to re-establish our connection with the Pope. During the past two weeks in Rome, I have been working on these issues.

The Pope has asked me to continue Tony’s mission and has called on his wife Emiliana Palmer to head the Ark Community’s ministry that had become the vehicle for communication of unity. The Pope’s title “Apostolic Representative for Christian Unity” bestowed on Tony has now been transferred to me and I will continue Tony’s work. Nothing about this effort will prohibit these blogs and they will continue as usual with a an added dimension.

My new primary mission is to tell the world that Protestants and Roman Catholics have a new compatibility even though many of our views differ. We strive to be one in the days that are before us. 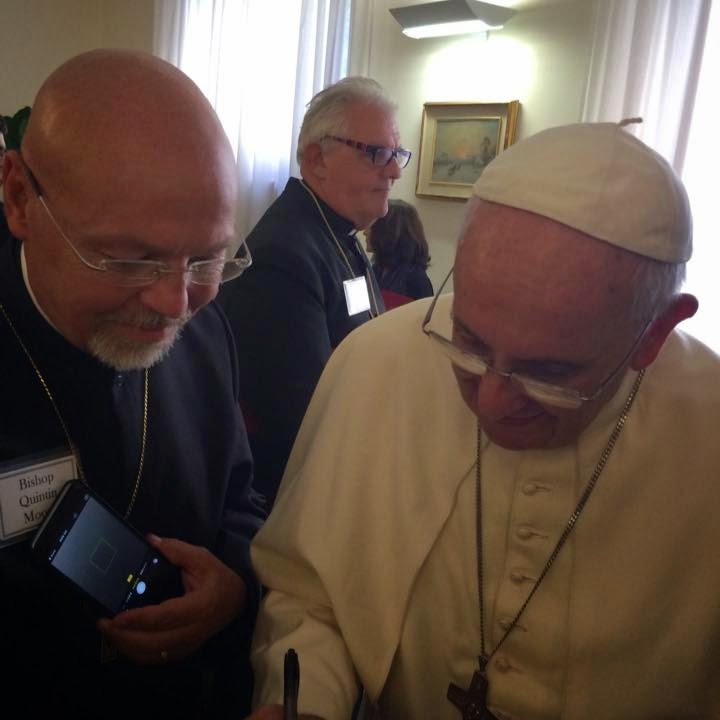 Quintin Moore is the lead pastor of The Father’s House, a Convergent congregation in Hutchinson, Kansas. For 28 years Quintin and his wife Annie have served faithfully the vision of revealing the unconditional love and grace of God to everyone. Since 2011 Quintin has served as the Presiding Bishop of the Christian Communion International, a family of Christian churches and worship communities around the world formed largely as a result of the Convergence Movement. He founded the Diocese of the Restoration in 2004 which serves as a covering for churches regionally. (source)

Reflecting on Rome!!! by Quintin Moore

“I was in Rome to visit with Pope Francis.”

The simple answer is “he is a friend of a friend.” My friend Tony Palmer was a friend of Pope Francis and friends always want their friends to know each other. Before Bishop Tony’s death, he had arranged for several of his friends to meet with Pope Francis. Bishop Tony and Pope Francis shared a dream together. They dreamed that the prayer that Jesus prayed in John 17, would become a reality in our lives.

“Our world needs unity; this is an age in which we all need unity. Not just unity for the sake of the social economy, but a unity that answers the very prayer of Jesus.” (Pope Francis)

So I have been with Pope Francis because I am a friend of a friend who believes that Jesus prayed for and desires for us to live in unity with Him and with each other, so that unbelievers might come to know Him.

Jesus told us, “A new commandment I give to you, that you also may love one another. By this all will  know that you are my Disciples, if you have love for one another.” (John 13:34-35)

Unity is the manifestation of our love for each other. “For the love of Christ compels us…” (2 Corn. 5:14) to walk in unity and friendship with one another. Jesus said, “…I have called you friends” (John 15:15). “Greater love has no one than this, than to lay down one’s life for his friends” (John 15:13). If He gave His life so we could be friends it is time, past time that we reach out to one another and be friends.

Father Francis says, “Whenever we Christians are enclosed in our groups, our movements, our parishes, in our little world we remain closed, and the same thing happens to us that happens to anything closed. When a room is closed it begins  to get dank. If a person is closed up in that room he or she becomes ill. Whenever Christians are enclosed in their groups, parishes and movements, they take ill.”

It is time for Christians to be healed. Healed of the wounded and broken relationship between brothers and sisters. This healing requires our cooperation.

My friend Tony used to say, “division is diabolical, diversity is divine.” The Church is diverse but she is also called to the “unity of the Spirit in the bond of Peace” (Eph. 4:3)

Father Francis is “a friend of a friend” who has become my friend. He encouraged us to share the Life of Jesus with everyone! He says, “Life grows by being given away, and it weakens in isolation and comfort. Indeed, those who enjoy life most are those who leave security on the shore and become excited by the mission of communicating life to others. When the Church summons Christians to take up the task of evangelization, she is simply pointing to the source of authentic personal fulfillment.”

It was my privilege to have met Father Francis…. to share the dream of unity, to pray for unity, and to look for ways of living in unity.

Jesus prayed that prayer and I believe that it will be answered as we contemplate and cooperate with the Holy Spirit.

Thank you Tony! Your life, your dream, your ministry has not been forgotten and it will never end.

The Miracle of Unity …. has not only begun, but it is growing! 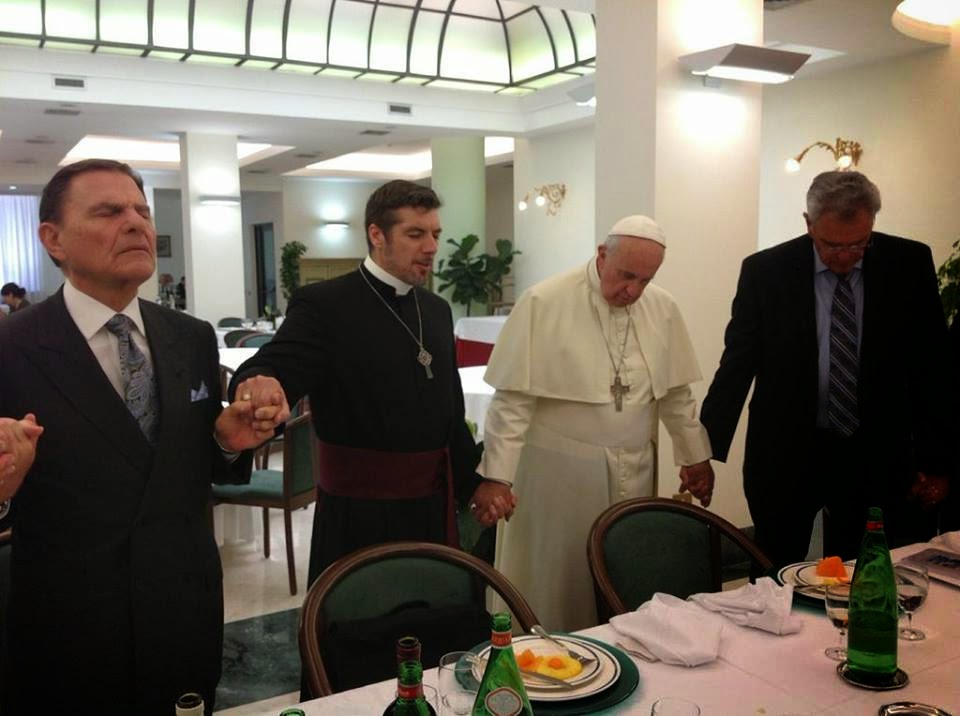 Kenneth Copeland, the late Tony Palmer, Francis, and James 'high-five' Robison hold hands at the first Evangelical Lunch on 23 June 2014.
Posted by hereisjorgebergoglio at 5:51 AM