If one is a practitioner of the Talmudic Jewish religion, it is logical that one believes in the Talmud.  Rabbi Skorka often quotes from the Talmud.  He is steeped in rabbinic lore as he is a rabbi.  The Talmud is anti-Christian in character.  What does the Talmud have to say about the Crucifixion of Our Lord?


On Passover Eve they hanged Jesus of Nazareth. And the herald went out before him for forty days: 'Jesus of Nazareth is going out to be stoned because he practiced sorcery, incited [to idol worship] and led Israel astray. Whoever knows an argument in his favor should come and argue on his behalf.' But they did not find an argument in his favor, and they hanged him on Passover Eve ... Jesus ... had close connections with the non-Jewish authorities, and those authorities were interested in his acquittal. Thus it was necessary to give him all the opportunity to clear himself, so that the justice of his conviction not be challenged ... Was Jesus of Nazareth deserving of a search for an argument in his favor? He was an inciter, and the Torah (lit., "the Merciful") says: "You shall not spare, nor shall you conceal him"! (Babylonian Talmud, Sanhedrin 43a, Steinsaltz edition, Vol XVII, Part III)

The modern day Pharisee, rabbi Skorka labors as he wants to destroy Christianity so that his descendants can rule the world.  The delusional rabbinical nightmare of Tikkun Olam would then be complete. 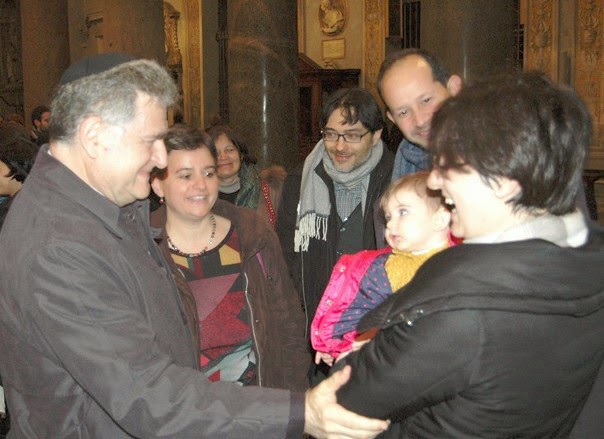 Rabbi Abraham Skorka at Sant'Egidio: “What counts in life is to leave a sign”
Community of Sant'Egidio
January 15 2014 | ROME, ITALY

On a visit to the Community, the rabbi of Buenos Aires commented on Psalm 1 at the prayer in Santa Maria in Trastevere

Friendship, dialogue and reflection on the Scripture characterised yesterday the visit to the Community of Sant'Egidio in Rome by the rector of the Rabbinical Seminary of Buones Aires, rabbi Abraham Skorka.

In the afternoon, the rabbi, together with founder of the Community Andrea Riccardi, visited the People of Peace Centre and met the immigrants that find solidarity and help in the Centre.

Later, in the basilica of Santa Maria in Trastevere, Skorka told about the friendship that binds him to Pope Francis and their common dream to change the Argentinean society and the world. Commenting on Psalm 1, the rabbi then underlined the importance of personally choosing to do good and work for a good future for many: "Beyond the events in which we live, but by goodness, righteousness, love, we leave an impression, and said: "There is a rabbinic story that speaks of a young man who asks an elderly man who was planting a tree that would bear fruit after many years, the young man tells him - but what is the use of planting it if you will not eat its fruit? - and the elder replied - my father also planted a tree for me, and I plant trees for those who will come".

To work together to build a future of peace, confident that "the seal of spirituality and affection that we leave will not be lost. A dream that binds together rabbi Skorka and Pope Francis, a dream that the Community of Sant'Egidio is committed to preserving and growing in prayer, in friendship with the poor, in the work for peace. 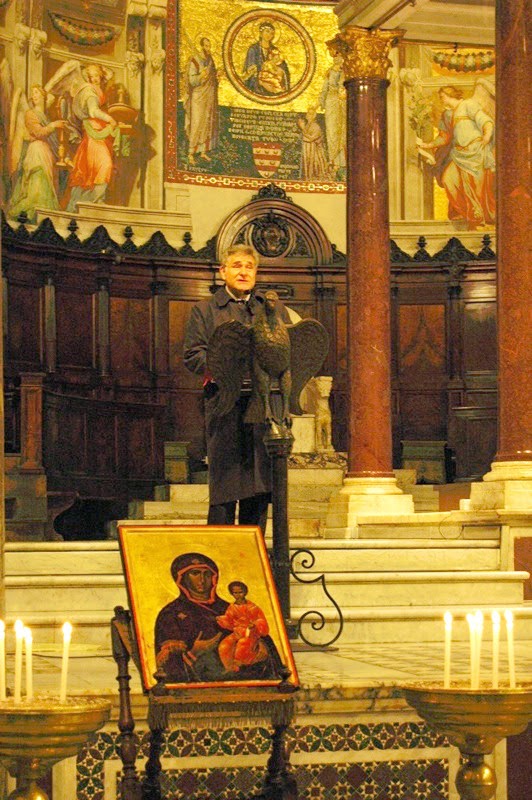 A rabbi lectures in Santa Maria in Trastevere (Rome, Italy) 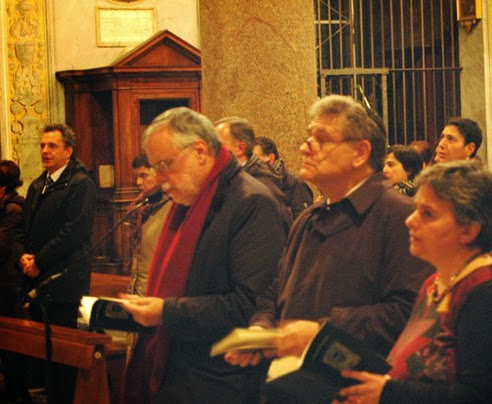 Rabbi Skorka, Francis, and the Community of Sant'Egidio share the common goal of destroying Catholic Italy through immigration.
Posted by hereisjorgebergoglio at 1:48 PM