Being in a state of grace is now a sin!

From the THIS IS SO CRAZY YOU CAN'T MAKE IT UP FILE at La Stampa's Vatican Insider one can read the following (underlines are ours):

“When conversion touches our pockets, it's a certainty”

At this morning’s mass in St. Martha’s House Francis criticised Christians who are “lukewarm, comfortable or concerned with appearances”

Beware of becoming “lukewarm, comfortable” Christians who “are concerned with appearances”. "When conversion touches pockets, it's a certainty.” These were the key points Francis wished to get across in this morning’s homily in St. Martha’s House, Vatican Radio reports.

The Pope underlined that Christians must always respond to Jesus’ call for conversion, otherwise, as sinners they will become corrupt. The act of conversion is a grace from God. Today Francis focused on “the three calls to conversion”, drawing inspiration from a passage in the Apocalypse of St. John and Jesus’ meeting with Zacchaeus.

In the first Reading, he observed, the Lord asks Christians in Laodicea to convert because they have become "lukewarm". They live a "comfortable spirituality". They think: "I do what I can, but I am at peace and do not want to be disturbed with strange things”. Pope Francis noted that people who “live well think nothing is missing: I go to Mass on Sundays, I pray a few times, I feel good, I am in God's grace, I'm rich" and "I do not need anything, I'm fine." This "state of mind - he warned - is a state of sin, feeling spiritually comfortable is a state of sin". The Lord has harsh words for people like this, he says: "Because you are lukewarm, I will spit you out of my mouth”. Despite this, the Lord gives them some advice, he tells them to "dress themselves" because "comfortable Christians are naked".

Then, he added, "there is a second call" to "those who live by appearances, Christians of appearances." These believe they are alive but they are dead. And the Lord asks them to be vigilant. "Appearances - the Pope said - are these Christians shroud: they are dead." And the Lord "calls them to conversion". "Am I one of these Christians of appearances? Am I alive inside, do I have a spiritual life? Do I hear the Holy Spirit, do I listen to the Holy Spirit, do I move forward, or ...? But, if everything looks good, I have nothing to reproach myself about: I have a good family, people do not gossip about me, I have everything I need, I married in church ...I am 'in the grace of God', I am alright. Appearances! Christians of appearance ... they are dead! Instead [we must] seek something alive within ourselves, and with memory and vigilance, reinvigorate this so we can move forward. Convert: from appearances to reality. From being neither hot nor cold to fervour".

The third call to conversion is with Zacchaeus, "the chief tax collector, and rich." "He is corrupt - the Pope said – he was working for foreigners, for the Romans, he betrayed his homeland: He was just like many leaders we know: corrupt. Those who, instead of serving the people, exploit the people to serve themselves. There are some like this, in the world. And people did not want him. Yes, he wasn’t lukewarm; He was not dead. He was in a state of putrefaction. He was corrupt. But he felt something inside: this healer, this prophet who people say speaks so well, I would like to see him, out of curiosity. The Holy Spirit is clever, eh! He sowed the seed of curiosity, and so in order to seem him this man even does something a little 'ridiculous. Think of an important leader, who is also corrupt, a leader of leaders – he was the chief - climb a tree to watch a procession: Just think of it. How ridiculous!” Zacchaeus, he said, "had no shame." He wanted to see him and "the Holy Spirit was working in him". Then "the Word of God came into the heart and with the Word, the joy." "Those of comfort and those of appearance – he said - had forgotten what joy was; this corrupt man immediately gets it", "his heart changes, he converts". So Zacchaeus promises to give back four times what he has stolen.

When conversion touches pockets, it's a certainty. Christians in heart? Yes, everyone is. Christians by blood? All of us. However, Christians with pockets, very few.  But, conversion ... and here, it arrived straight away: the authentic word. He converted. But faced with this word, the words of the others, those who did not want conversion, who did not want to convert: 'Seeing this, they grumbled: 'He has gone to the house of a sinner!' He has dirtied himself, he has lost his purity. He must purify himself because he entered the house of a sinner.”

Pope Francis reiterated that these are "the three calls to conversion" that Jesus himself makes to "the lukewarm, the comfortable, to those of appearance, to those who think they are rich but are poor, who have nothing, who are dead”.  The Word of God, "is able to change everything", but "we don’t always have the courage to believe in the Word of God, to receive that Word that heals us within”. In the last weeks of the Liturgical Year, the Church wants us all to "think very, very seriously about our conversion, so that we can move forward on the path of our Christian life.”


Michael over at Public Vigil has some interesting commentary on Francis' words in the entry,  bergoglio's criminal mind at work.


"If everything looks good, I have nothing to reproach myself about: I have a good family, people do not gossip about me, I have everything I need, I married in church …I am ‘in the grace of God’, I am alright. Appearances! Christians of appearance … they are dead!"

This is what bergoglio thinks of Catholics who follow the teachings of the Catholic Church... "they are dead!"...

...This is the criminal mind of bergoglio at work. Here we have caught the criminal in the very act of committing his crimes against God.

If you blink you will miss it... like a pickpocket or a scam artist or a con man... bergoglio is skilled at covering up his crimes by way of a slight of hand... he distracts us for a moment... then slips his hand into our pocket and lifts our spiritual wallet... full of Catholic treasures... and off he goes...

... only later do we realize that something is missing... we have been robbed...

... the knife in the back so skillfully inserted that we scarcely feel a warm sensation at the moment...

... later we notice a trickle of something warm and then when we touch the spot and see the red stain on our hands come to the horrifying reality that we have been stabbed...

... the bullet that pierces the body... enters in one side and out the other... deliberately missing the vital organs... but causing tremendous internal bleeding... but only a slight sensation of pain at the moment of impact... but a few steps later... we faint from the loss of blood and the shock...

... and by then the culprit is gone... disappeared... there is only a kindly looking priest... smiling...

... bergoglio the meta-criminal moves on to his next victim...

Who is the one maintaining the false appearance of being a Christian? 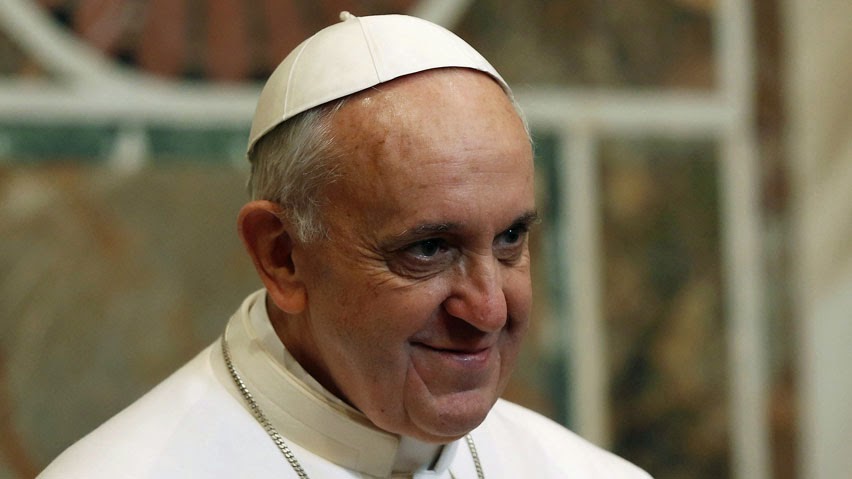 Posted by hereisjorgebergoglio at 5:38 AM