Coming soon to a Novus Ordo Church near you in the United States? 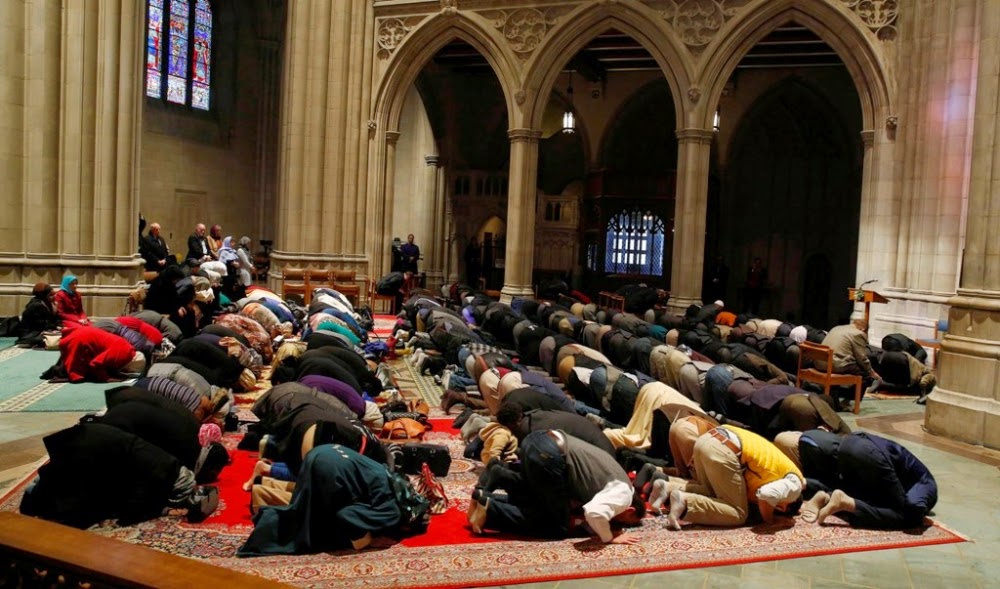 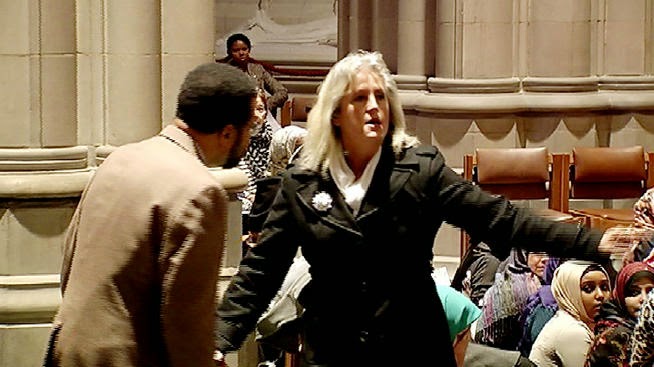 Unidentified woman protester at Washington National Cathedral disrupts first Muslim prayer service Friday afternoon and shouts, "We have built, and allowed you here in mosques across this country. Why can't you worship in your mosque, and leave our chuches alone?"


UPDATE: 3:31 p.m. The Muslim prayer service held at the Washington National Cathedral was briefly disrupted by a protester, according to a local NBC report.

"Jesus Christ died on that cross over there!" a woman said loudly, immediately after announcements at the beginning of the service were made. "He is the reason why we are to worship only him. Jesus Christ is our lord and savior!"

According to the NBC report, she continued, "We have built, and allowed you here in mosques across this country. Why can't you worship in your mosque, and leave our chuches alone?"

The protester was then escorted out of the cathedral, News4's Kristin Wright reported. She was removed without incident, but she continued her protest once she was taken to an adjoining space.

The Catholic church [CMJ's note, this is incorrect. This not a Catholic church but an Episcopal Protestant church.] in Washington, D.C. altered its visitor tour schedule in order to host traditional Islamic Friday prayers called Jumu'ah. The service was led by South African Ambassador Ebrahim Rasool, and held in the Cathedral's north transept, an area considered "almost mosque-like" because of its arches and limited iconography. 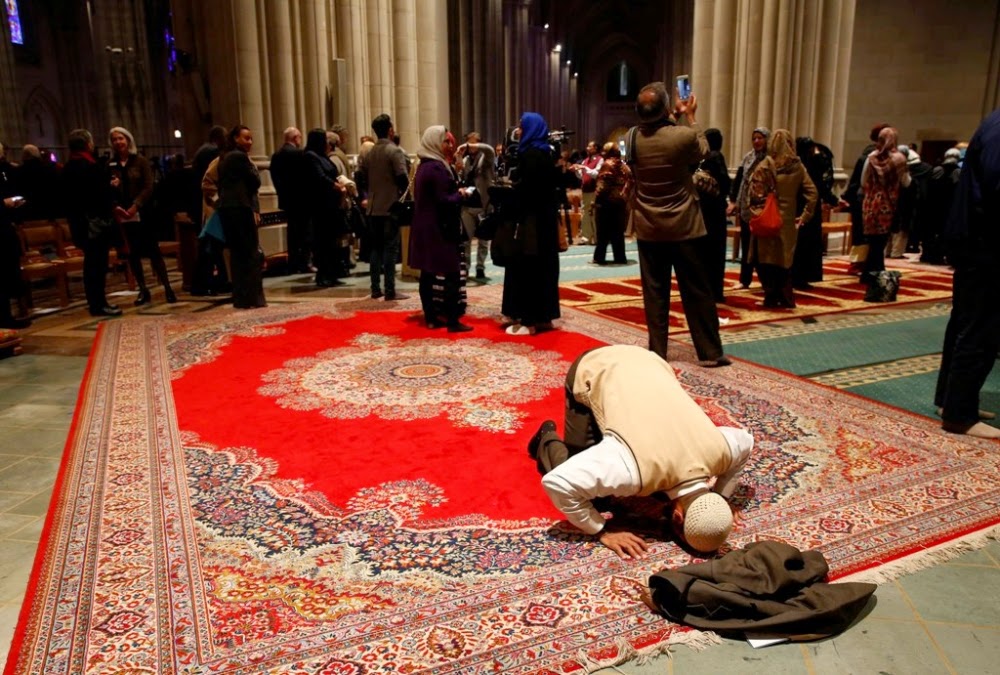 Rev. Canon Gina Gilland Campbell was scheduled to offer a welcome to start off the service.

According to the National Cathedral website,Campbell wanted to hold the historic service because she believes that "powerful things come out of praying together."

The site further explains "Leaders believe offering Muslim prayers at the Christian cathedral shows more than hospitality. It demonstrates an appreciation of one another's prayer traditions and is a powerful symbolic gesture toward a deeper relationship between the two Abrahamic traditions." 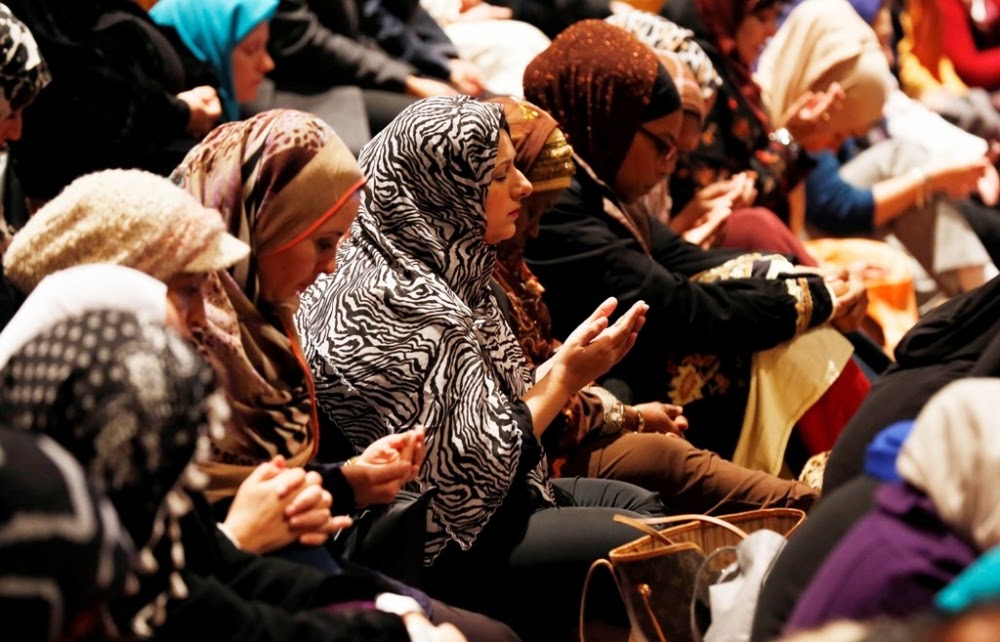 This is not the first time the National Cathedral has invited controversy with its services. In June the Cathedral invited openly transgendered Episcopal priest Rev. Cameron Partridge to preach from its pulpit in honor of LGBT pride month. Openly gay Episcopal Bishop Rev. Gene Robinson presided over the Sunday service. The Cathedral also hosts gay marriage ceremonies.

Planners hope Friday's service will inspire Muslims around the world to be hospitable to Christians.

The service was scheduled to be livestreamed onto the Cathedral's website so it is accessible to everyone.

Yes the above church is an Episcopal Protestant one but Francis and the Vatican hierarchy often take their cues from Protestant religions. Francis has extolled Protestants as authentic Christians and even called their bishops, "brothers". It is then natural for us to speculate that Francis with his 'humbleness' and 'infinite compassion' for heretics dictates at some point in the future to his churches that on Friday they open their doors to their Moslem brethren so they can have a place to pray. After all Francis believes Moslems pray to the same god as he prays to.

The Church Of Jesus Christ Of Latter-Day Saints (Mormons) in New Jersey already allow Moslems to pray in their Temples on Friday. As have the Methodists in Tennessee. The Episcopal Church in Connecticut even sold an empty church to the Moslems when they found out they were in need of a mosque. Not to be outdone the Holy Trinity Catholic Church in Syracuse, New York was sold to Moslems for $150,000 and turned into a mosque. The trend of converting empty churches into mosques has spread like wildfire in Europe. In Italy some Catholic churches have already decided to open their door to Moslems on Friday years ago!

So much for Fridays being dedicated to Our Lord's Crucifixion. Is it any wonder churches around the world are empty when the so-called leaders of various churches don't understand the basics of the Faith?

Posted by hereisjorgebergoglio at 9:31 AM