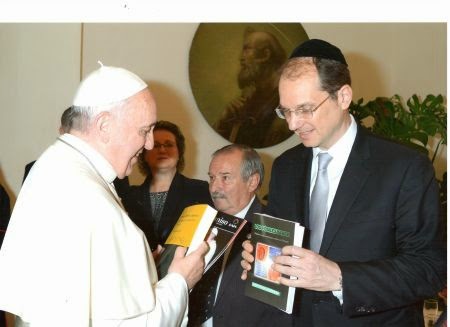 Two well-known books authored by Bar-Ilan University physicist Prof. Nathan Aviezer were presented to Pope Francis at last week's meeting at the Vatican between the Pontiff and a delegation of Argentinean Christian, Jewish and Muslim leaders and politicians.
The Spanish-language editions of both books were given to the Pope by Rabbi Isaac Sacca, Chief Rabbi of the Sephardic community in Argentina.

In Fossils and Faith: Understanding Torah and Science (KTAV Publishing House), Prof. Aviezer shows that scientific findings have become important tools for understanding many Biblical passages and for deepening one’s faith. Fossils and Faith deals with the very essence of religion – faith, prayer, miracles, free will, the creation of mankind, genetic engineering, life on other planets, chaos, the interaction between God and the world – showing how recent advances in science touch on each of these subjects in important ways.

Aviezer's other book presented to the Pope, In the Beginning: Biblical Creation and Science (KTAV Publishing House), combines an understanding of modern science with the scholarly insight of three millennia of rabbinical commentary to demonstrate the absence of contradictions between the scientific and Jewish approaches to creation.

From wikipedia's entry on Jewish views on evolution,

Is this where Francis is getting his un-Catholic ideas on the origins of human life which he recently shared with the Pontifical Academy of Sciences?  For more on these beliefs of Francis see, Francis' latest craziness is...
Posted by hereisjorgebergoglio at 1:15 AM