the "new evangelization" in Argentina

...with the Misa Criolla,
which also happens to be
Francis' favorite mess!


Listen to the new version of Misa Criolla in Cristo Rey

More of the new interpretation of the Misa Criolla

Last of the new Misa Criolla

The three short videos above are from the 75th Anniversary of iglesia Cristo Rey (Christ the King Church).  The music being played is a Francis favorite the Misa Criolla.  The group performing is the “Miguel Angel Castellarin Big Band & Afro Sound Chorus”.  In 2009, Miguel Angel Castellarin devised this project as an offering of thanks to God for all the graces he had been given in his life and for strengthening his faith.  He combined his love of jazz, blues and Caribbean salsa in his new version of the Misa Criolla.  Jump to 2012, when Miguel had finished the project he received an audience with Jorge Cardinal Bergoglio.  Jorge loved the idea of a reinterpretation of the Misa Criolla and especially loved the jazz.  He's a big fan of Benny Goodman.  After hearing the new Misa Criolla, Bergoglio gave it his blessing and  said, “this should be being played live already.”  He encouraged the making of a documentary film  which was produced and shown on the diocesan television station in Buenos Aires, Canal 21.   Care to take a guess as to what music was played for the 2013 Holy Week in the Metropolitan Cathedral in Buenos Aires?  That's right, the reinterpetated Misa Criolla!  Who's honor was it played for?  Well, it wasn't for Our Lord.  Correct again, it was performed to honor Francis!


What is the Misa Criolla? 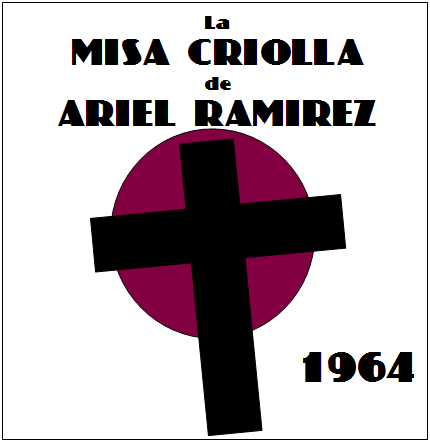 The Misa Criolla was composed and recorded in 1964 by Ariel Ramírez.  Misa Criolla translates into English as simply, the Creole Mass.  In the Washington Post obituary for Ramírez one reads of his signature work,

"...just as the Second Vatican Council permitted the celebration of the Catholic Mass in the vernacular.

"Misa Criolla," widely regarded as a stunning artistic achievement, combined Spanish text with indigenous instruments and rhythms. Its effect is that of a reverent carnival, and it has sold millions of albums and been performed countless times across the world by artists including opera star José Carreras and Latin American folklore singer Mercedes Sosa."


What was the impetus behind the work?

"In the 1950s, Ariel Ramírez was living and studying music in Germany. One day, while staying at a convent in the countryside, he met two nuns who had been at the convent for many years. They told him about how, during the Holocaust, they had secretly helped German Jews, who were confined to a concentration camp nearby, by bringing them food each day. Ramírez was so inspired by their story that he began to think about writing a piece that would celebrate all of humanity. The Misa Criolla is unique because it is distinctly Argentine and Catholic, while at the same time appealing to people all over the world. There is an Argentine saying that says “know your village, and you will know the world.” The Misa Criolla is a piece that is important for a “village” (the people of Argentina) but also for the world."


This is a fitting representation of the mind of Francis.  He is a modernist who is more a rabbinical traditionalist than he is a Catholic.  Francis also celebrates all of humanity and has said in speeches and interviews how he desires to make man the center of society!  How about making God the center, Francis?

Francis said in a recent interview,

"When I heard Misa Criolla for the first time I was a student, I think I was studying theology at that time, I can´t remember well. I really liked it! I enjoyed ´Lamb of God', which is magnificent. I will never forget that I heard Mercedes Sosa singing it."

Not only does Francis enjoy the Misa Criolla, it is Francis' favorite mass!  He also gives away copies of it to prelates who visit him.  This includes Sean Cardinal O'Malley who stopped in to visit the then Cardinal Bergoglio in 2012 and wrote of it on his blog,

"I had to stop in Argentina on the way, where I was his guest and had a wonderful visit with him. On that occasion, he gave me a beautiful recording of the Missa Criolla, the Argentine Mass."


O'Malley has further stated that it was "a great CD that I enjoy very much."

According to Francis' recent interview with Elisabetta Picque on,

"December 12, the day of the festivities of the Virgin of Guadalupe, the patroness of Latin America, during which he will say mass at Saint Peter´s Basilica and during which Argentine musicians will interpret Misa Criolla, composed by Ariel Ramírez 50 years ago. The author´s son, Facundo Ramírez, and the singer Patricia Sosa will be performing together with a Roman choir."


This also happens to be the 50th anniversary of the day the composer presented his work to Blessed Paul VI.


To recap, we have a vernacular mass inspired by the concentration camp not by Our Savior, Jesus the Christ.  This same mass celebrates humanity, not God's love or sacrifice.  This work happens to be Francis' favorite Mass and tomorrow it will be played in St. Peter's Basilica in honor of the Blessed Virgin Mary during a Novus Ordo service.