We at Call Me Jorge... wish we didn't always have to post stories like this but Francis is the company he keeps.  The article below is about rabbi Alvin Berkun. As usual, underlines are ours for emphasis. He is well known for his interfaith work and appearing on television as a representative of the Talmudic faith.   Lesser known is the work he has done trying to get the release of felon and traitor Jonathan Pollard.  Andrew Goldstein writes in the Jewish Chronicle,

Berkun believes that there is a chance Pollard can be freed, but it will take pressure on the White House, he said.

Pollard gave secrets to Israel, but none of those secrets caused any harm or death to an American.  According to Berkun, individuals that gave secrets to other countries that caused harm to Americans have had lesser prison sentences than Pollard.

“I can’t help but think there’s an element of prejudice,” he said, noting that he believes Pollard has been “singled-out.”

Fellow members of his Talmudic Jewish religion think very highly of Berkun as can be seen in comments made by the late Senator Arlen Specter addressing the Senate (click here to watch video). 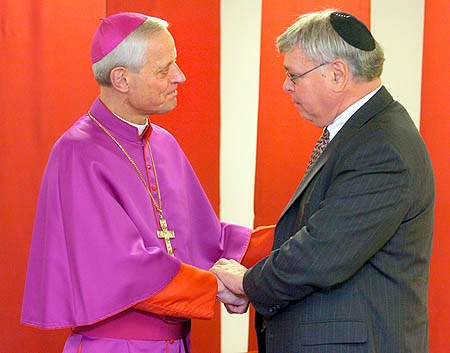 "Due to our common roots, a Christian cannot be anti-Semitic!" Pope Francis declared, referencing a Vatican II document, Nostra Aetate, that emphasized the Jewish roots of Christianity.

Using a favorite phrase of Pope John Paul II, he greeted his guests with "Dear elder brothers and sisters, Shalom."

In his relationship with Jews, "this pope is as close as any pope could be," said Rabbi Alvin Berkun, rabbi emeritus of Tree of Life Congregation in Squirrel Hill and a past president of the Rabbinical Assembly, the international organization for rabbis in the conservative movement.

"He is really very good for Jews, no question about it."

Rabbi Berkun was among 30 representatives of the Jewish Committee on Interreligious Consultations to meet with Pope Francis on Monday. The group has been the Vatican's partner in dialogue since 1970.

Rabbi Berkun has been involved for about half that time. He studied under Rabbi Abraham Joshua Heschel, who helped the bishops at Vatican II draft Nostra Aetate. It denounced anti-Jewish bigotry, especially a popular notion that all Jews were "Christ-killers."

When there are serious tensions in Catholic-Jewish relations, Vatican officials have been known to call Rabbi Berkun directly to explain their point of view. He credits Pope Benedict XVI with good intentions despite occasional gaffes, and has long honored Pope John Paul II for modeling friendship and respect for Jews and Judaism.

But while Pope John Paul exercised his pre-papal ministry in a post-Holocaust Poland largely devoid of Jews, Cardinal Jorge Bergoglio worked alongside a thriving Jewish community before he was elected pope.

"This pope's life intersected with all of those rabbis in Buenos Aires. He could have absented himself from those relationships, but they were very important to him," Rabbi Berkun said.

He had met Cardinal Bergoglio during a 2004 meeting of the dialogue group in Buenos Aires. He visited a Catholic-Jewish project to help the city's poorest people with food and job training. There he took a photo of a priest and a rabbi walking together through a slum. He showed it to Pope Francis when they had a brief chat.

"I also told him that Pittsburgh is the only diocese in the world that has the program where rabbis teach in the parochial schools. We've been doing it for 11 years now, and Catholic educators also come to our synagogues to talk about changes in Catholic-Jewish relations," he said.

He was describing the Catholic-Jewish Educational Enhancement Program, in which rabbis teach the religion classes once a month at all Catholic high schools in the Diocese of Pittsburgh.

The pope, he said, "appreciated hearing about C-JEEP in Pittsburgh."

Although Rabbi Berkun is thrilled with the progress in Catholic-Jewish relations since 1965, he worries that it's known mostly to theologians, not ordinary Catholics and Jews. Pope Francis, be believes, can take the message to grass roots.

"The church has clearly adopted [Nostra Aetate's] principles -- thus my audience today and the tremendous progress in interfaith relations in Pittsburgh," he said.

"I would like to see, on the eve of the 50th anniversary of Nostra Aetate, the pope's promulgation and implementation to the believer in the pew. He surely believes anti-Semitism is a sin. His flock, especially in Europe, has to hear him say it again and again."

Posted by hereisjorgebergoglio at 2:28 PM