Menachem Ben-Sasson of the famed Sassoon family was at the Vatican yesterday under the auspices of representing the Hebrew University of Jerusalem.  Meachem, is the current president of Hebrew University, and a former member of Israel's Knesset where he represented the Kadima Party, an offshoot of the Likud Party.  While in the Knesset, he served as the chairman of the Constitution, Law, and Justice Committee, chairman of the Parliamentary Inquiry Committee on Wiretapping, and also chaired the Lobby for Higher Education.  As a university professor he received his PhD in the History of the Jewish People in the Islamic Lands.  His three major works are Jews in the Era of Transition - the Traditional World; the Jews of Sicily; The Rise of the Local Jewish Community in Muslim Lands.  In addition, he specializes in research on the topic of Mosheh ben Maimon (aka Maimonides, RaMBaM) and the impact he has had on Jewry in Eastern Europe.   Many of these studies were sponsored with grants from the Rothschild family.  Menachem has also served as a board member of Yad Vashem.  Just to keep to the theme of family, Felix Warburg (yes, a Sassoon relative), founder of America's Federal Reserve System, also founded the Hebrew University in Jerusalem.  So here, we have a member of the Sassoon family meeting with Francis to discuss anti-semitism.

"Your Holiness, you made statements against anti-semitism and it's a day to say that one of the ways to fight anti-semitism is through science. We represent scientific work. In this university, delegation, has people coming from all over the world, from Brazil to all countries of Europe.”


What a crazy world we live in!  Using science to fight anti-semitism which has its origins in despicable behavior!  The Sassoon family for those who don't know earned their fortune through opium dealing, slave trading and cotton.  If you don't think that's great, you must be an anti-semite!  They put their ill-gotten gains into legitimate businesses which they soon dominated as well.  One of the ways the Sassoons accomplished this was by putting their illegitimate and legitimite competitors out of business through usury, by lending them money through shell companies.  When times temporarily got lean for the Sassoons their relatives the Rothschilds were always there to bail them out and call in loans of their competitors.

The Sassoons are philanthropists as long as it continues to benefit their tribe, having built hospitals, synagogues, schools, museums, libraries, convalescent homes, Masonic Lodges, and even helped create the nation of Israel.  Speaking of hospitals and drugs, the Sassoons had opium pushed in hospitals as a cure for leprosy!  Today, Hebrew University is a leading educational institution researching the use of illegal narcotics for use in health care.  The Sassoons are also proponents of the kaballah and responsible for its wide spread throughout Europe and the rest of the world.  David Sassoon had at one time the largest private library of Judaica known.  Famous historian Gerhard Scholem (aka Gershom Scholem) used this library as the basis for his writings on kabbalah, magic, and mysticism.

We can hear the cries, "but Menachem Ben-Sasson can't help what his relatives and ancestors did!"  As we have tried to demonstrate above the Sassoons believe in keeping it in the family.  What better way than having your own in-house historian of your own blood gloss over all the evils perpetrated by your family?  And what line is he selling today?  Of course, maybe Menachem Ben-Sasson was just meeting Francis because he had heard the Sistine Chapel was available for rent and he wanted to throw a celebration party there.  Wonder who would supply the opium?

What did Francis tweet the day after he met the delegation from Hebrew University?  Like a good student he regurgitated the company line.

Francis is doing his part in helping Our Lord's Crucifixion become a footnote in the history books.

For an introduction on the Sassoon family we suggest the two excellent revisionist volumes below by Mary Kienholz.

More on the Sassoon family: 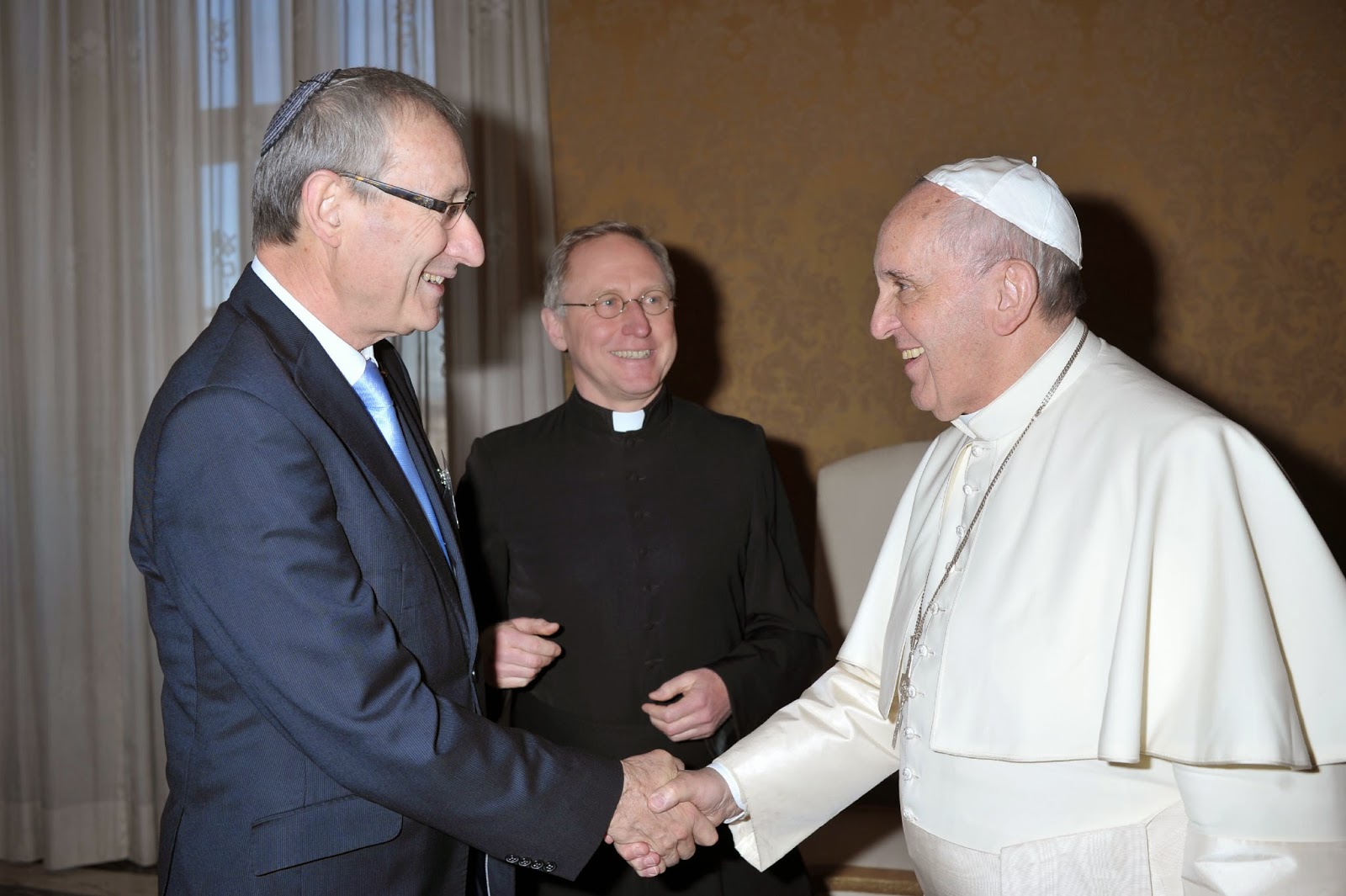 After being contacted by several people who wish to remain anonymous we at Call Me Jorge... decided to add this note.  We became aware of Menachem Ben-Sasson during Francis' May 2014 visit to Israel. At that time we researched his family tree all the way to 1850 which is as far back as we could find. In the 1900's the Derechinsky family changed their last name to Ben-Sasson. Due to our studies of genealogy and finding families changing their last names often to a more prominent relative's surname from the past in order to help themselves in the present and our extensive study of the Sassoon family, all the pieces seemed to fit. If Ben-Sasson is not of the Sassoon family then his father changed the family's surname into one of a slave trading, opium dealing, ruthless family by coincidence. We at Call Me Jorge... feel this doesn't lesson the anti-Catholic message of Holocaustianity which Menachem Ben-Sasson and Francis were selling at the Vatican the other day.
Posted by hereisjorgebergoglio at 10:57 AM