Praying With My Legs:
The Spiritual Witness of Abraham Joshua Heschel

Why are a group of monks meditating on the writings of Abraham Heschel?  Who are these Benedictine monks?


The Weston Priory of Benedictine monks in Vermont was founded in 1953 by Leo A. von Rudloff.  On the Benedictine website they write,


After a first failed attempt at establishing a monastic foothold in North America, and returning to Germany as an American citizen, Leo was sent to Israel where he became Abbot of the faltering German Dormition Abbey on Mt. Zion. His diplomatic skills, Benedictine spirituality, and open ecumenical spirit brought him recognition from Pope John XXIII and assignment to a preparatory commission of the Second Vatican Council. 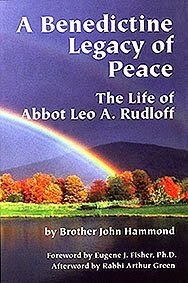 
From the back cover of his biography:


"For those in search of a model of inspiration and heroism, here is one: Abbott Leo Rudloff, founder of the Weston Priory of Benedictine monks in Vermont. Emerging from the horrors of Europe to create a new monastic community in the United States, he was a man of extraordinary spiritual refinement and profound wisdom. His friendship with my father, Rabbi Abraham Joshua Heschel, and his engagement with the State of Israel reveal the hope of a new kind of relationship between Catholics and Jews." --Professor Susannah Heschel, Chair, Jewish Studies Program, Dartmouth College

Screenshot from the webpage of the Weston Priory of Benedictine monks, 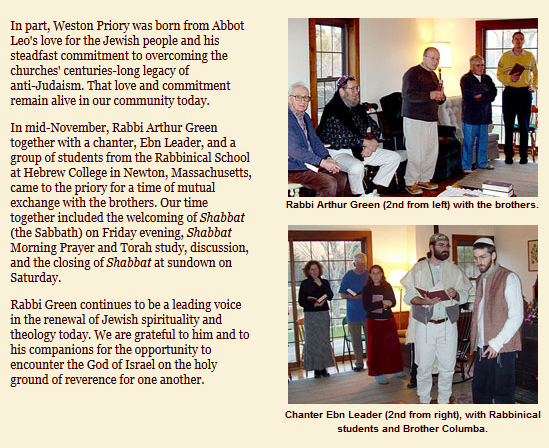 Arthur Green, was a talmudic rabbinical student of Abraham Heschel


A blurb from a recent lecture, Abbot Leo von Rudloff, Dormition Abbey and the Genesis of Nostra Aetate,

Three quotes about von Rudloff in the book, From Enemy to Brother: The Revolution in Catholic Teaching on the Jews, 1933-1965 by John Connelly: 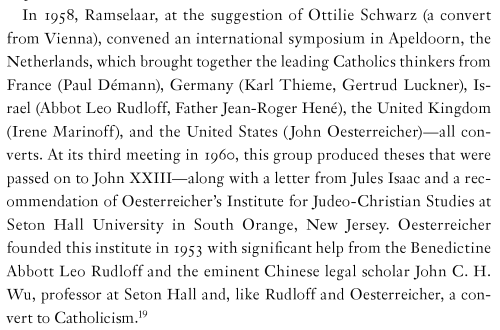 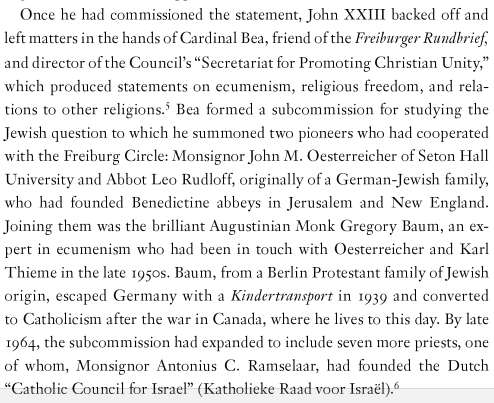 page 247
Posted by hereisjorgebergoglio at 7:43 PM