...it's the 50th Anniversary of the transitional
vernacular Mass! 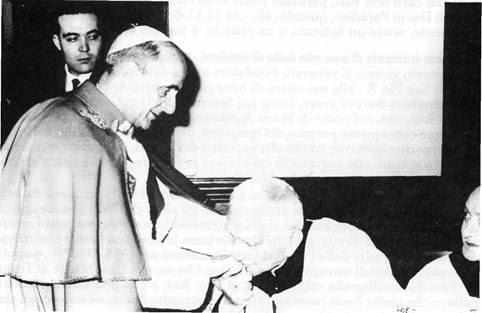 "Today, we inaugurate the new form of the liturgy in all parishes and churches in the world, for all the Masses followed by the people. It's a great event, you will remember it as the beginning of a flourishing spiritual life, as a new commitment in the correspondence of the great dialogue between God and man."
- Paul VI, 7 March 1965 -

...and Francis is going to the same All Saints church Blessed Paul VI first celebrated it at! 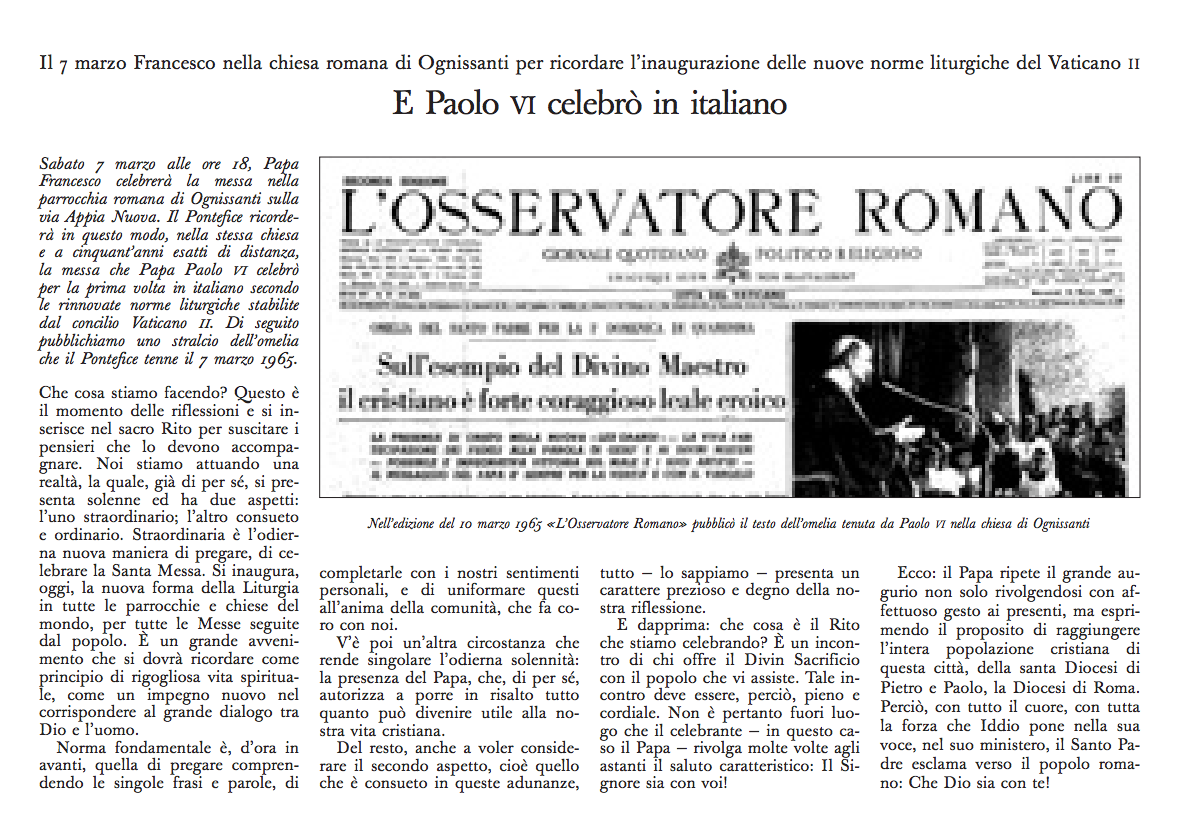 Francis is going to celebrate the Novus Ordo Missae at la Parrocchia di Ognissanti (the Parish of All Saints) in Rome on 7 March 2015.  As one reads above, the occasion for this visit is the 50th Anniversary of the transitional Mass celebrated by Blessed Paul VI at this same church!  The transitional Mass is similar to the 'scientific experiment' of turning the heat up on a frog in a pot of water gradually until it dies. 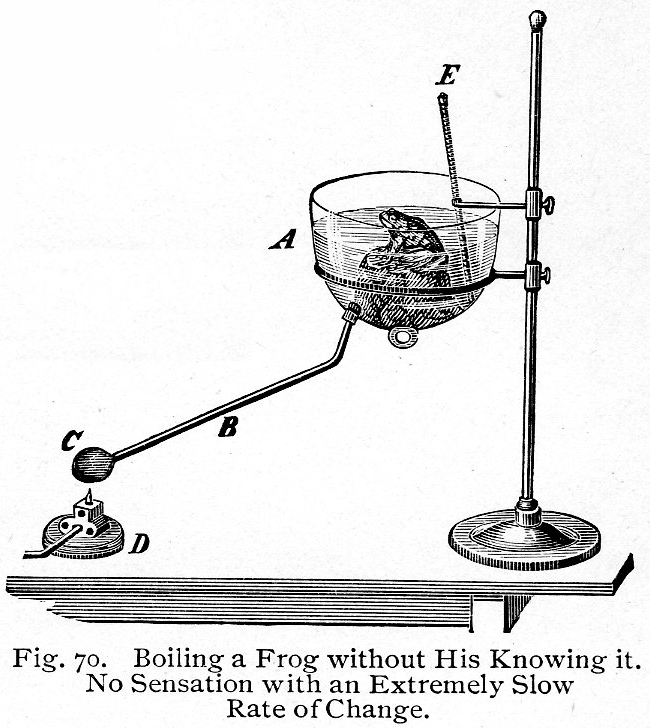 A special papal commission, known as the Consilium was established during the Second Vatican Council to implement the liturgical reform mandated in Sacrosanctum Concilium.  This group was led by Annibale Bugnini (a freemason) and Cardinal "Church of the poor" Lercaro. Section 50 of Sacrosanctum Concilium reads,

The rite of the Mass is to be revised in such a way that the intrinsic nature and purpose of its several parts, as also the connection between them, may be more clearly manifested, and that devout and active participation by the faithful may be more easily achieved.

For this purpose the rites are to be simplified, due care being taken to preserve their substance; elements which, with the passage of time, came to be duplicated, or were added with but little advantage, are now to be discarded; other elements which have suffered injury through accidents of history are now to be restored to the vigor which they had in the days of the holy Fathers, as may seem useful or necessary.


This in turn led to the publication of the instruction Inter oecumenici on 26 September 1964.  Inter oecumenici introduced many novelties into being.  Parts of Mass sung by the choir or read by laymen were no longer read by the priest, prayers (Leonine, the Last Gospel, Psalm 42, etc...) were omitted, all readings must be facing the people, reading could be in the vernacular, along with a myriad of other changes.  The three things which stand out because they are so much a part of the Novus Ordo Missae are:  1) when receiving communion the formula became "Body of Christ" - "Amen",  2)  the altar should be freestanding so the priest could face the people during Mass, and  3)  if possible the Eucharist should be kept in a suitable place which may be the altar, a side altar, or elsewhere.

On 27 January 1965, the Consilium issued Nuper edita which integrated the above changes into the rubrics for the Mass as well as permitted the whole Mass to be said in the vernacular and ordered the Liturgy of the Word not to be conducted from the altar but a chair.  Ecclesia semper of 7 March 1965 put into law communion in both kinds and concelebration. 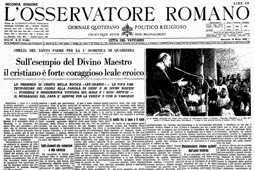 Which bring us back to the day of 7 March 1965.  This was the day Blessed Paul VI put all these changes into practice.  He like Francis believes in leading the revolution from the front!  Francis considers this such an important date to the Church, why if only the self absorbed navel gazing neo-pelagians and rosary counters would recognize it too.  As Blessed Paul VI predicted, this Mass has ushered in a golden age of spiritual life.  Just look at the attendance of your local Novus Ordo Mass or at the convents and seminaries, they are bursting at the seems! 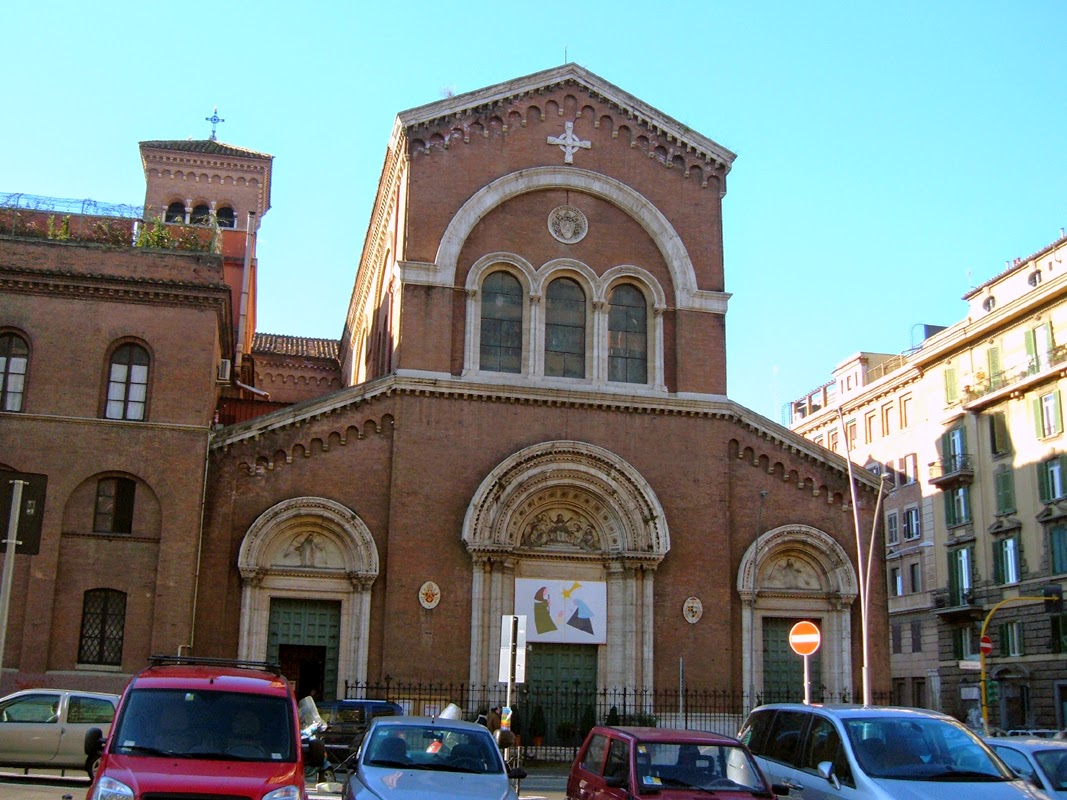 La Parrocchia di Ognissanti (the Parish of All Saints) in Via Appia Nuova where it went down. 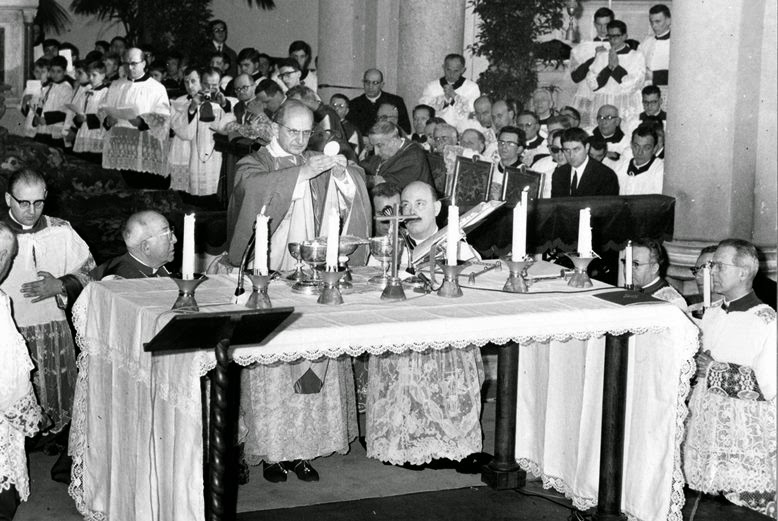 Paul VI facing the people and saying the transitional Mass in the vernacular. 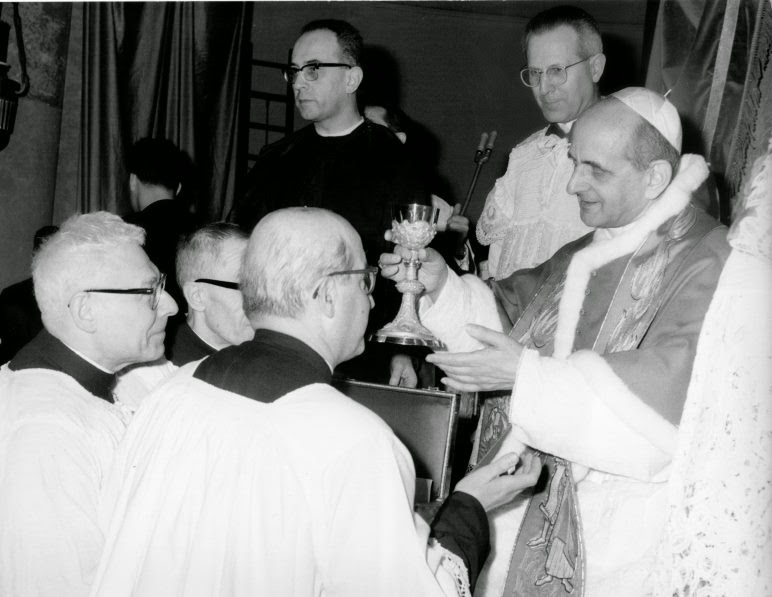 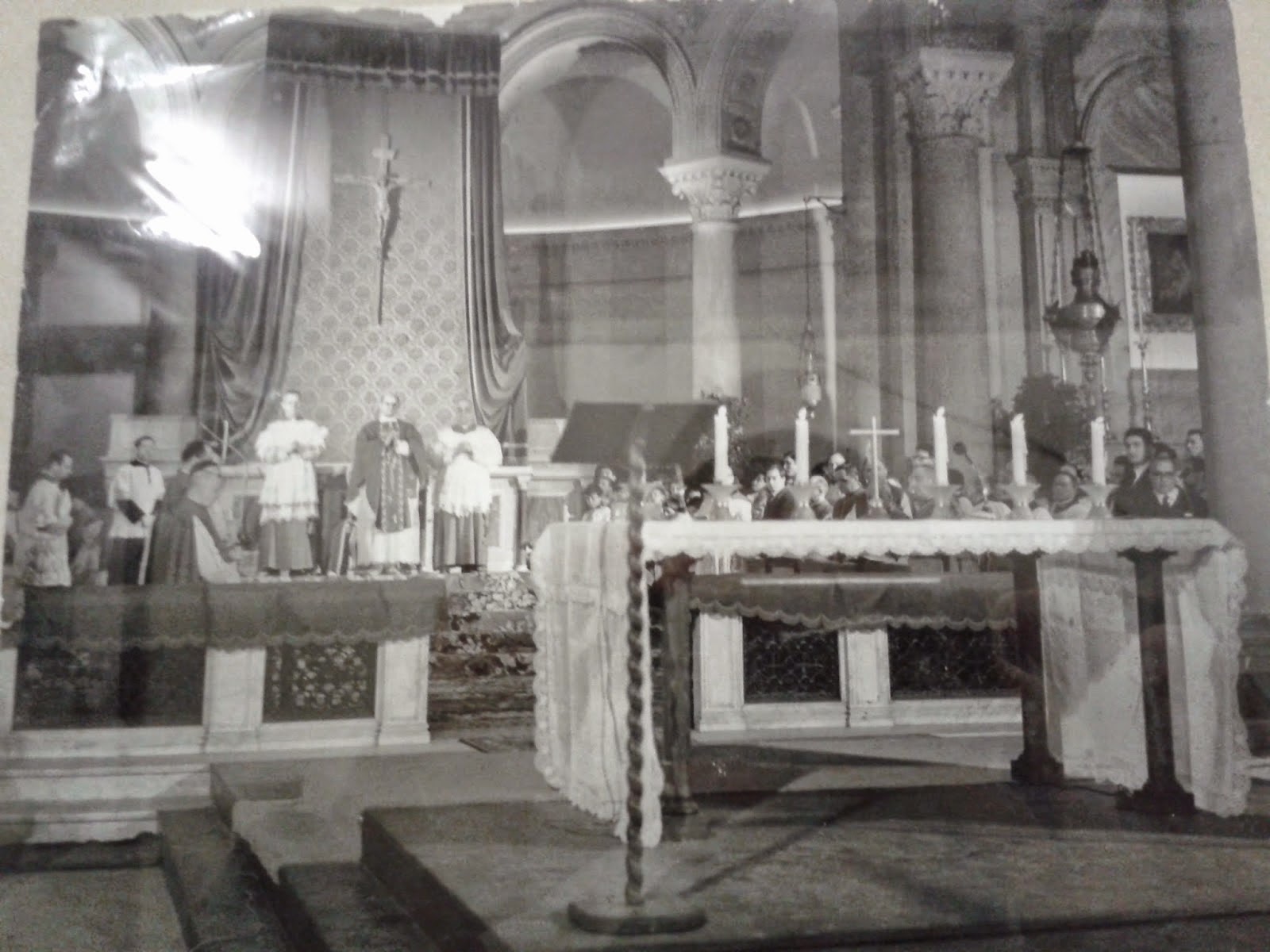 Paul VI standing with back to the High Altar which has been covered.
Notice also, the table in front of the communion rail. 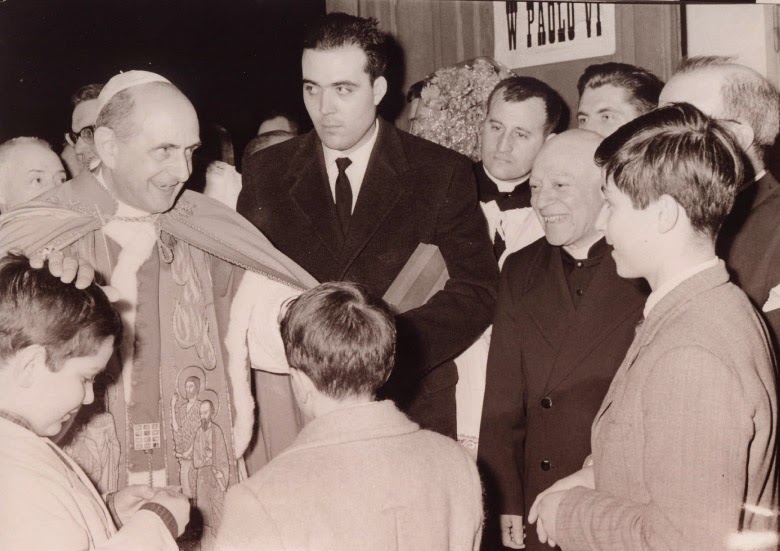 Paul VI among the people at All Saints, 7 March 1965.
Posted by hereisjorgebergoglio at 12:18 AM