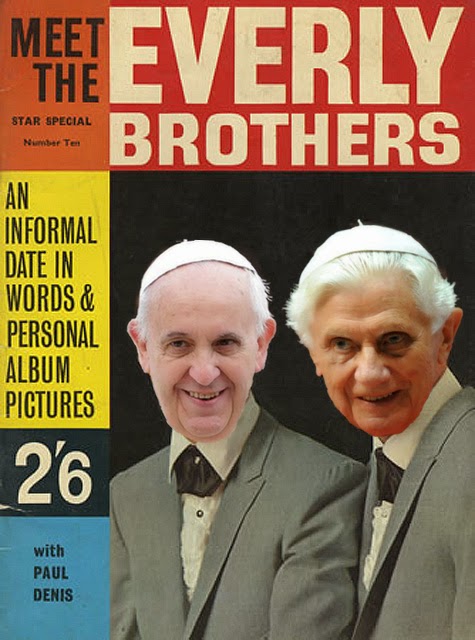 Francis and Benedict XVI are of the same substance, both are modernists only differing in their styles.  The major difference between the two, in their modes of operation, is that Francis has a savy pro-sodomite PR team which has sold him to the world as a humble person, where as Benedict XVI was lacking in this department.  Turns out Benny is just as humble as Frankie.  Underlines in the article below are ours for emphasis.


the Everly Brothers of popes

Pope Francis delivered another gesture this week destined to burnish his legend for both humility and reform, deciding that an annual Mass in which newly appointed archbishops from around the world receive their symbol of office will no longer be held in Rome, but in their home archdiocese.

That event, called the Pallium Mass, traditionally was a highlight of the Roman summer. Francis has now taken himself out of the equation, stipulating that the pallium, a woolen cloth symbolizing service, will be presented to each archbishop individually by the papal ambassador in his country.

Most people likely will see it as another way in which Francis is breaking with tradition, playing down the trappings of a royal court in the Vatican and emphasizing the importance of the local church. Those who paid careful attention during the Benedict XVI years probably would agree, except for the “breaking with tradition” part.

In truth, Francis’ latest reform is not a departure from Benedict, but yet another instance in which the two pontiffs seem to be singing from the same songbook.
One of Benedict’s own first decisions after he took office in 2005 was that he would no longer preside personally at beatification Masses, and that those services would no longer be held in Rome. (Beatification is the last step before sainthood, allowing someone to be called “Blessed.”)

That choice, too, was about the importance of the local Church, since beatification authorizes veneration of a figure for a local community, while canonization is for the entire Church. Benedict XVI was also sending a signal that the pope doesn’t have to be the center of attention — the same point Francis is making about the pallium.

That’s just the tip of the iceberg in terms of continuity. Consider these other examples:

Climate change/the environment: As the world awaits Francis’ forthcoming encyclical letter on ecology, it’s worth remembering that Benedict XVI devoted so much attention to the environment that he was dubbed the “Green Pope.” Among other measures on his watch, the Vatican signed an agreement to become Europe’s first carbon-neutral state (albeit a tiny one) by replanting a stretch of Hungarian forest to offset its carbon use, and installing solar panels atop the Paul VI Audience Hall.

Financial clean-ups: Francis has made avoiding future financial scandals a linchpin of his Vatican reform. The clean-up began under Benedict, the first pope to open the Vatican to outside secular inspection through the Council of Europe’s anti-money laundering agency Moneyval. It was also Benedict who launched a new financial watchdog agency under the leadership of Swiss anti-money laundering expert René Bruelhart, and who triggered a review of accounts at the Vatican Bank.

Child sexual abuse: Francis has committed to “zero tolerance” for sexual abuse and has created a new Commission for the Protection of Minors to lead the charge. Here, too, he’s building on Benedict’s lead, who defended “zero tolerance” while he was a Vatican official and made it the Church’s official policy as pope. Benedict was the first pope to meet with victims and the first to apologize for the crisis in his own name. He also moved aggressively to weed abusers out of the priesthood, laicizing some 400 priests facing abuse charges in his last two years in office alone.

Outreach to non-believers: Francis is celebrated for sitting down with anybody, including a left-wing atheist journalist in Italy for a couple of blockbuster conversations. That follows Benedict’s example, who brought Italian Cardinal Gianfranco Ravasi to Rome to launch the “Courtyard of the Gentiles” project to foster conversations with non-believers. One of the few times Benedict has broken his post-resignation silence was to write atheist mathematician Piergiorgio Odifreddi in late 2013, thanking him for writing a book about him and raising some points for conversation.

Even Francis’ much-vaunted personal humility can be eerily reminiscent of Benedict.

For instance, Francis drew kudos shortly after his election for returning to Rome’s Casa del Clero, a clerical residence where he’d been lodged before the conclave, to pack his own bag and to pay his own bill. Yet immediately after his own election eight years before, Benedict had done essentially the same thing, heading over to his former apartment in Rome’s Piazza Leonina to gather his belongings on his own.

On his way out, Benedict stopped to knock on the doors of the three other apartments located on his floor. He didn’t want to say goodbye to the cardinals who lived there, but to thank the nuns who did the cooking and cleaning for being such good neighbors. (As a footnote, some of these sisters were Americans, members of The Religious Sisters of Mercy in Alma, Michigan).

None of this is to deny the obvious differences between Benedict and Francis, beginning with the contrast between an intellectual and a pastor. Politically, Francis’ instincts are probably more centrist, though that may also have to do with Benedict’s penchant for focusing on abstract principles and Francis’ on concrete situations.

Why are the commonalities between the two pontiffs often hard to perceive?

In part it’s because Benedict had a poor public narrative — “God’s Rottweiler,” the “Vatican’s Enforcer,” and so on, which often meant attractive aspects of his agenda and personality were played down. With Francis, they’re almost always the top of the story.

Whatever the explanation, the reality is that beyond superficial differences in personality and style, substantively these two can almost seem like the Everly Brothers of popes, singing in pitch-perfect harmony.

Posted by hereisjorgebergoglio at 10:27 AM