An apology from Paul Nicholson? 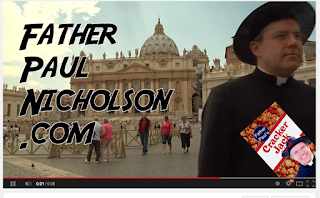 From the bizarro world of the cracker jack of all cracker jack Opus (Ju)Dei presbyters, Paul Nicholson, we have a new blog post,  A Regrettable Mistake: Fr. Nicholas Gruner and Me.  One might think from the title that this 'regrettable mistake' was Nicholson's behavior towards Gruner the day after he passed away but then you would be mistaken.  Nicholson uses this post to take another stab at Gruner while at the same time comparing Louie Verrecchio of HarvestingTheFruit to one Archbishop Milingo who apostatized from the church and married a woman.  The reason for the 'regrettable mistake' is Gruner trusted Abp. Milingo just as Nicholson trusted Verrecchio.  The 'regrettable mistake' according to Nicholson is that he confided in Verrecchio that he was being disobedient towards his superior and Verrecchio shared this in a blog post!  What is laughable is that Nicholson doesn't deny the charge he was disobedient towards his own bishop!  Instead he performs a character assassination of Louie!  Isn't Gruner's disobedience the very reason Nicholson is so adamant in his attacks of Gruner?  Apparently, some priests are more equal than others.  Nicholson's backhanded attack reminds us of the story of Esther which he is so enthralled with.  Indeed 2015 is a year of Esther for this Opus (Ju)Dei prelate.

Did this priest get his orders from a box of Cracker Jack?

Watching this video leads one to believe so.


"It is ugly to see a priest who lives to please himself, who acts like a peacock!"
Francis in sermon to newly ordained priests on 27 April 2015

Posted by hereisjorgebergoglio at 3:14 AM