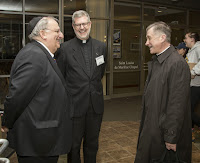 Catholic-Jewish relationsCultivating the good seed others have sown

Earlier last month I was privileged to present some opening remarks at the 20th anniversary of the Joseph Cardinal Bernardin Jerusalem Lectures at DePaul University. Cardinal Bernardin himself inaugurated this series and gave his “Jerusalem Lecture” in 1995 at the Hebrew University in Jerusalem. The topic was anti-Semitism — a topic of no small interest then and now.

My initial appearance on this occasion gave me the chance to thank the American Jewish Committee, the Chicago Board of Rabbis, the Jewish Federation of Metropolitan Chicago, and the Spertus Institute of Jewish Studies for their support of these lectures over the past two decades.

This year’s lecturer, Rabbi David Sandmel, was quite familiar with the history of Catholic-Jewish relations, noting that the document, “Nostra Aetate,” the declaration on the relation of the church with non-Christian religions, has provided “a framework for working through the difficulties that have arisen, and that inevitably will arise.”

“True, the Jewish authorities and those who followed their lead pressed for the death of Christ; still, what happened in his passion cannot be charged against all the Jews, without distinction, then alive, nor against the Jews of today. The Jews should not be presented as rejected or accursed by God, as if this followed from the Holy Scriptures. All should see to it, then, that in catechetical work or in the preaching of the word of God they do not teach anything that does not conform to the truth of the Gospel and the spirit of Christ. Furthermore, in her rejection of every persecution against any man, the church, mindful of the patrimony she shares with the Jews and moved not by political reasons but by the Gospel’s spiritual love, decries hatred, persecutions, displays of anti-Semitism, directed against Jews at any time and by anyone.”

In my remarks I noted that we have seen a rise in anti-Semitism in Europe, the United States and elsewhere. This has sometimes been accompanied by incidents of violence and even death. These developments point to the fact that the way of thinking embraced by the church since the Second Vatican Council has not taken hold. The framework of mutual understanding needed for resolving difficulties, as Rabbi Sandmel noted, is not adopted by all.

Sadly, some people seem to be returning to, or perhaps more realistically never left, a former storyline of anti- Semitism. They find it much easier to know “who you are against rather than what you are for.” In hard times and even in good ones, blaming others and not taking responsibility is an easy thing to do.

Recent events call us to enhance our efforts at mutual understanding and make them more widely known, to develop a positive narrative that will capture the imagination of most people, and to make our positive relationships what comes first to mind for the majority of people. Our starting point must be positive — friendship, hospitality, mutual concern.

In my remarks I took the opportunity to offer some suggestions about how we might move in these positive directions.

1) We must continue our healing processes — for many people the centuries of conflict are still alive in local traditions and anecdotes. We must continue to acknowledge the truth of the past as we move into the future. This is an ongoing project.

2) We must continue to esteem the values of the Jewish tradition and its contribution to the church. As Cardinal George noted in his 2005 Bernardin Lecture which commented on “Nostra Aetate”: “As a Catholic, I must both respect the truth in Judaism and preserve and promote the spiritual and moral goods of Jewish faith and the values of Jewish culture and society. Pope Francis made a similar point in “Evangelii Gaudium”: “God continues to work among the people of the Old Covenant and to bring forth treasures of wisdom which flow from their encounter with his world. For this reason, the church also is enriched when she receives the values of Judaism.”

3) We must continue our catechesis and our positive instruction of the next generations, for many Catholics and some Jews as well have not assimilated the changes of the last 50 years and thus need to embrace our new framework for looking at things.

4) We need to continue to work toward deeper mutual understanding and toward deeper sensitivity to the needs of those on the margins — especially those living in Chicagoland.

5) Most importantly, we must continue to develop our friendship with one another. This roots our common understanding and our common efforts.

The friendship the Archdiocese of Chicago has enjoyed with the Jewish community over the years and especially through the sponsoring partners of this lecture series, has borne much fruit, which I witnessed in our gathering at DePaul.

The fruit yielded through common labors should make us proud of all those who cultivated it, but it also should give us hope that like all good fruit, it will produce seeds for future growth. All we need to do is cultivate it.

Posted by hereisjorgebergoglio at 4:50 AM