There's no business like show business!  Today, Francis met with Mahmoud Abbas, the self declared dictator of the State of Palestine.  Since 2009, when his elected term expired, Abbas has declared himself the president even though no elections have taken place.  Mahmoud Abbas cares little about the plight of the Palestinians and the main reason he continues to rule is so his family and friends can accumulate more wealth and power.  Here is what Abbas said recently,

“What happened to the Jews in the Holocaust is the most heinous crime to have occurred against humanity in the modern era.”


Hard to believe that Mahmoud Abbas's 1984 Candidate of Science thesis was titled, "The Other Side: the Secret Relationship Between Nazism and Zionism".  He has certainly changed his tune since those days.  Isn't Abbas forgetting about the heinous crime of the stealing of Palestine from its people or how about the heinous not to mention ruinous crime of usury?  Abortion anyone?

Hamas whom is Fatah's (Abbas's political party) enemy recently signed a peace agreement  with them.  What is never told by the media is Hamas is funded and armed by the Israeli while Fatah is funded, armed, and trained by the United States of America but directed by Talmudists inside the Obama administration.   This means they both are controlled puppets of Kabbalistic Zionism whose purpose is to transform the peace loving Palestinian peoples into golems to be used to further the destruction of Christianity.

In steps Francis to legitimize the whole process.  After all according to the media, Francis is so humble and full of mercy.  As the 'moral authority' of Catholics what better way to put an official stamp on the entire thing.  For certain the Israelis will complain, wail, and protest about the whole process but didn't Br'er Rabbit, the sly trickster, do this too?

Get ready soon for the next move in the one way dialogue which the Zionists call the 'peace process'. 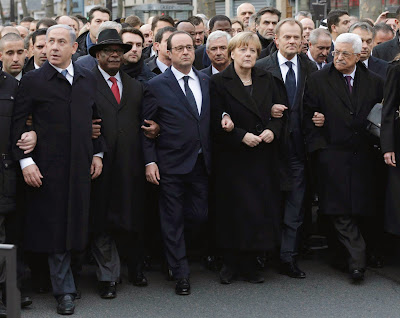 Mahmoud Abbas on the far right marches in a unity rally showing support for the
Rothschild owned and anti-Christian magazine Charlie Hebdo.
Posted by hereisjorgebergoglio at 4:50 PM