Francis the jokester is making fun of Our Lord once again!

Towards the end of April on the 28th of the month, Francis met with Rafael Correa, the President of the Republic of Ecuador at the Vatican.  You can see in the photo below, Correa is flashing the power fist of the revolutionary communist. 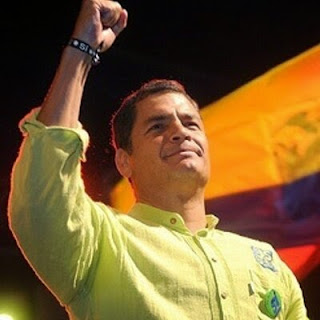 Correa is a founding member of the Alianza PAIS (Patria Altiva y Soberana).  In 2006 this political party signed an accord, with the Ecuadorian Socialist Party and the Communist Party of Ecuador, which helped propel him into the presidency.  One can imagine the two revolutionaries, Francis and Rafael Correa, meeting and laughing about how the world has turned out.  Rafael Correa shared one exchange with Francis on his twitter account. (English translations are below the screenshots.)

"We have arrived in Rome, it is more
beautiful than ever, in Spring." 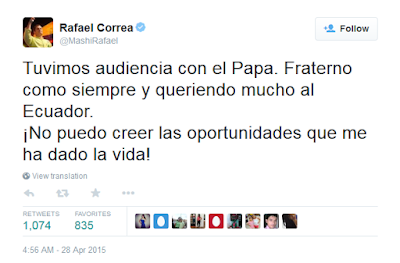 "We had an audience with the Pope.  Fraternal as ever and wanting very much to see Ecuador.  I can not believe the opportunities life has given me!" 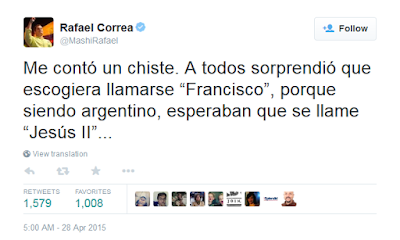 "He told me a joke. All were surprised that he chose the name, "Francisco" because being Argentine, they expected
that he would call himself, "Jesus II" ..." 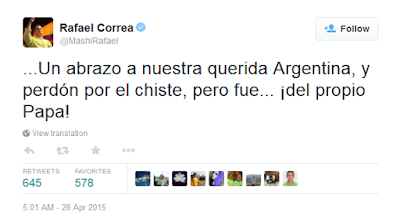 "...A hug to our beloved Argentina, and sorry for
the joke, but it was... from the Pope himself!"


This isn't the first time Francis has made fun of Argentina or Our Lord.  In a wide ranging interview, in March 2015, with Valentina Alazraki of the Mexican news program Noticieros Televisa, Francis asked, "How does an Argentinian commit suicide?" The answer, "He climbs to the top of his ego and jumps off!"

For instances, which we have covered, when Francis has made fun of Our Lord, Jesus the Christ, please see the following entries:


More of Francis the modernist joking around:


We, at Call Me Jorge..., have to wonder if he learned to use Our Lord's name as a punchline when he was a bouncer at the tango clubs, or from his young adulthood communist friends, even perhaps from his lifelong Talmudic buddies? 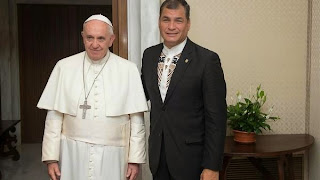 Posted by hereisjorgebergoglio at 8:04 AM