the mystery of the woman in the very short skirt

or (Im)modest Dress in the FSSPX


At a Fraternité Sacerdotale Saint Pie X (FSSPX) baptism one would think they would find Catholic behavior but at this baptism everyone failed to do their Catholic duty.  The FSSPX bills itself as the last bastion of Catholicism that will one day restore Catholic tradition in the world.  Take a look at the the photos.  Notice anything?

Here are the two photos in question: 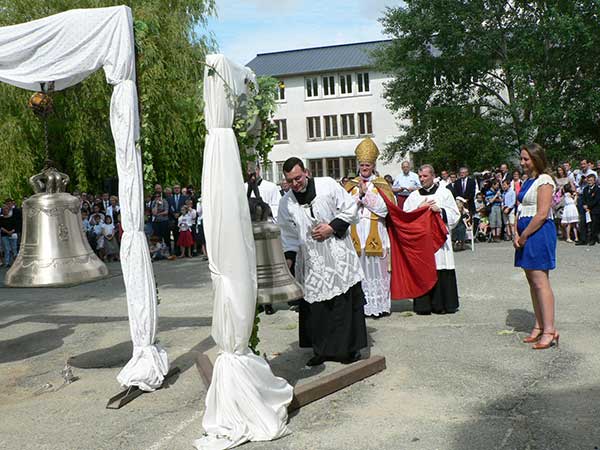 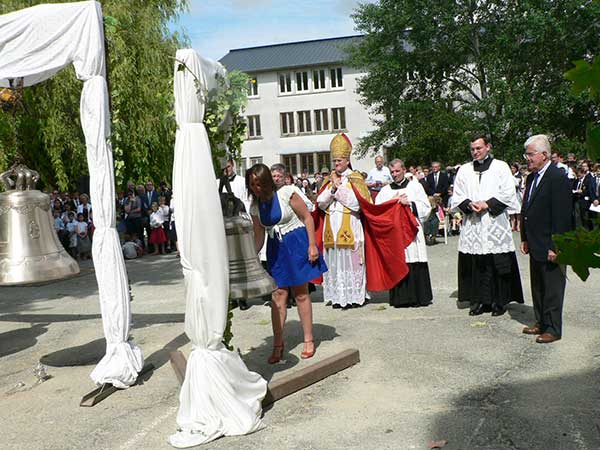 We at Call Me Jorge... certainly do!  The woman is wearing a very short dress with cap sleeves.  Anything else?  Yes, not one person saw to it to tell this woman she was immodestly dressed.  Not Bp. Fellay, who she is standing in front of, nor the priests participating in the baptism of the bells, nor the hundreds in attendance!  Padre Pio wouldn't let the woman into the confessional let alone ring a bell which has just been baptized.

If that weren't bad enough, the FSSPX priest in charge of the webpage posted the two photos.

What's going on?  Why does the FSSPX think this is a modest form of dress?

Sometimes the most simple and obvious answer is the best one but this time we'll instead ask our favorite lawyer over at the Remnant Newspaper to chime in. (We didn't really ask Mr. Ferrara.) 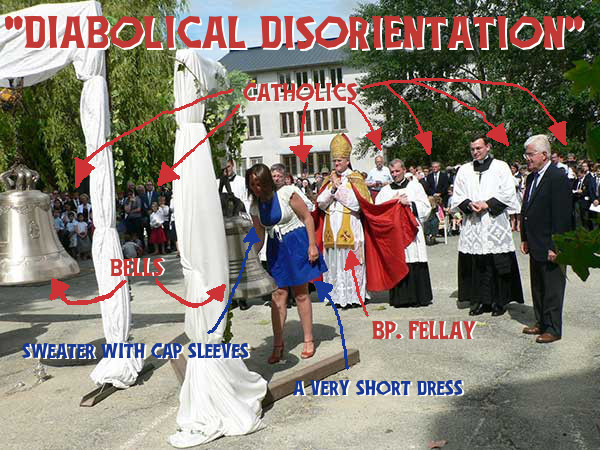 See, Mr. Ferrara has a reoccurring case of Diabolical Disorientation and he is in regular contact with Michael Matt on webcam who he infected who then passed it on to Bp. Fellay when they met in Menzingen, Switzerland.  Fellay didn't notice anything different until he felt a little sluggish in France but the show must go on.  As a result all in attendance came down with cases of Diabolical Disorientation. 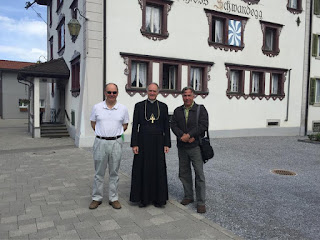 
That has to be the answer right?

It's not like Bp. Fellay associates with Zionists and accepts money from usurers does he Chris?

What did you say?

Sounds a bit silly and complicated doesn't it?

Thanks for clearing that up Chris!


That is certainly more plausible than the simple answer that they (FSSPX) don't know Catholicism very well or if they do, they don't practice it.

It doesn't end there though.

Now if one goes to the same page today, 21 juin 2015 : Trois cloches, bénies par Mgr Fellay, vont bientôt tintinnabuler à La Martinerie, the two photos are no longer shown.  The reason for this is someone (we guess an FSSPX priest or employee) deleted the two photos from the html code.  To demonstrate that we are not blowing smoke one can click here for photo #1 or here for photo #2 and see in the web address that the pictures are still on the FSSPX website even though they don't appear on the page.  To see the cached version of the webpage click here.

Can anyone from the FSSPX can shed some light in this?

We thought it prudent to ask another simple question.

The staff at Call Me Jorge... looked on the internet everywhere we could think of and even asked Rome if they had a photo of Francis with a woman in a mini-skirt.    Nada! Zilch!  What did we find out?  The dress code section on the Vatican's website for Papal Audiences.

Women:
Women can wear trousers, capri pants and skirts and dresses are permitted however they cannot be shorter than knee length and shoulders must be covered.
In very hot weather a shawl or large scarf/Pashmina can be draped around the shoulders for visiting the sites.
Bare shoulders and short skirts are not permitted and again come prepared to cover up if wearing shorts.


Even the Vatican has a little bit of semblance of a woman dressing modestly if she is wearing a skirt or dress. We wonder if a woman wearing trousers is also acceptable to the FSSPX as it is to the Vatican?

If someone over at the FSSPX knows what happened, by all means, please fill us in with the information in the comments section below.

Bp. Fellay and all those in attendance would do well to study up on Catholic standards of dress and then put them into practice.  Some handy resources they which they can start their studies with are:


In addition to a her above mentioned book, Colleen Hammond has a Pinterest board on modest fashion which is an excellent resource where women can find modest clothes which are stylish.

Thanks to the Non Possumus blog for bringing these photos to our attention in their post, MONS. FELLAY, LOS SIONISTAS Y LAS FALDAS CORTAS.
Posted by hereisjorgebergoglio at 12:36 AM