“Yes to the rediscovery of the Jewish roots of Christianity. No to anti-Semitism.”
Francis' comment at today's general audience


“Since Nostra Aetate, indifference and opposition have turned into cooperation and goodwill. Enemies and strangers became friends and brothers.”
Francis' comment at today's general audience 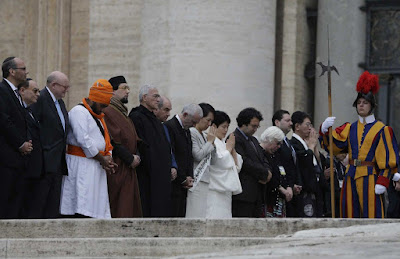 Dear Brothers and Sisters: Today’s Audience marks the fiftieth anniversary of the Second Vatican Council’s Declaration Nostra Aetateon the Church’s Relation to Non-Christian Religions. I welcome the followers of the different religions who have joined us, especially those who have come from great distances. The Council’s Declaration was an expression of the Church’s esteem for the followers of other religious traditions, and her openness to dialogue in the service of understanding and friendship. The past fifty years have seen much progress in this regard. In a special way, we give thanks to God for the significant advances made in relations between Christians and Jews, and in those between Christians and Muslims. The world rightly expects believers to work together with all people of good will in confronting the many problems affecting our human family. It is my hope that the forthcoming Jubilee of Mercy will be an occasion for ever greater interreligious cooperation in works of charity, reconciliation and care for God’s gift of creation. As we look to the future of interreligious dialogue, let us pray that, in accordance with God’s will, all men and women will see themselves as brothers and sisters in the great human family, peacefully united in and through our diversities.

I greet the English-speaking pilgrims and visitors taking part in today’s Audience, including those from England, Wales, Ireland, Sweden, Denmark, Finland, Nigeria, Israel, Australia, Indonesia, Japan and the United States of America. In a particular way I greet the ecumenical delegation from Korea, and I renew my thanks to the representatives of the different religions who have joined us today. God bless you all!

Posted by hereisjorgebergoglio at 8:16 AM