Francis understands in his guts that Christ is offensive to Talmudic Jews and he plays along with them, sadly leaving the Talmudists to wallow in their spiritual darkness. 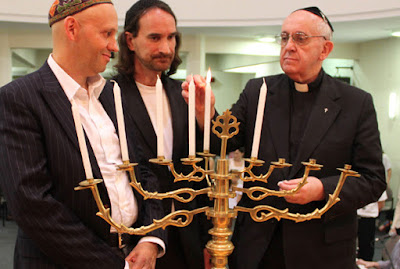 Recall the post, the 'Oral' Nostra Aetate, in which we briefly discussed the speech of Rabbi Marans who is quoted from in the article below, where he explains how Nostra Aetate and the actions of Francis are like the Talmud.


The Underlines in the article below are ours for emphasis.

Jews are unlikely to line the streets of the nation’s capital when Pope Francis arrives September 22, just as Yom Kippur begins, but the pontiff’s visit to the United States has nevertheless stirred interest and excitement among many members of the Jewish community.

Through his official statements and in his personal gestures, Francis has come to be viewed by many in the Jewish community as among the friendliest popes they have ever seen. During the two years of his papacy, Jews have been impressed by, among other things, his strong stance against anti-Semitism, his more flexible approach to some social and political issues on which most Jews take a liberal stand and even by his close Jewish friends.

“If the pope was up for election, it is likely he would get a strong majority of the Jewish vote,” said Adam Gregerman, assistant director of the Jewish-Catholic relations institute at Saint Joseph’s University, in Philadelphia. “He has many fans in the Jewish community because he is perceived as progressive, tolerant and not dogmatic.”

Stories of the Argentine pope’s warm embrace of the Jewish community resemble at times the miraculous tales related about Jewish rabbis in Hasidic communities. Many recall how Francis, upon hearing that his close friend Rabbi Abraham Skorka from Buenos Aires was visiting Rome during the holiday of Sukkot, invited Skorka to stay at his Vatican residence so that the rabbi would not have to drive. Francis also made sure all his food was kosher. When Skorka stood up to recite the holiday blessings after the meal, the pope stood up, too, and answered, “Amen.”

A more recent story refers to Israeli president Reuven Rivlin’s visit to the Vatican in early September. Rivlin’s bureau chief, Rivka Ravitz, who is Orthodox, felt she could not bow to the pope, as custom requires. Francis, according to the tale circulating in Orthodox publications, covered his cross with the palm of his hand and bowed to Ravitz.

“He gets it in his kishkes,” said Rabbi Noam Marans, director of interreligious and intergroup relations at the American Jewish Committee. “It’s natural for him, it’s part of who he is.”

American Jews will have only one opportunity to meet with Francis during his visit, at a multi-religious service he will hold at the 9/11 Memorial & Museum in New York on September 25.

“The Holy Father looked for a place where he could meet with leaders of other religions to give a common witness to peace,” said Bishop James Massa, auxiliary bishop at the Diocese of Brooklyn, who organized the event. Massa told the Forward that the event will be in the spirit of the 1986 World Day of Prayer for Peace, organized by Pope John Paul II in Assisi, Italy. “It will take place at the 9/11 Memorial, where religion was invoked to carry out a terrible act of terror and this meeting will counter it with a message of peace,” he said.

Out of consideration for the religious restrictions of some of the participants, including Orthodox Jews, there will not be a communal interreligious prayer. But Francis “will offer a prayer that is inclusive and not specifically Christian,” Massa said.

Previous popes had held separate meetings with Jewish leaders while visiting the United States, but Francis’s tight schedule and the Jewish holidays made such an event impossible. A meeting, however, could take place in Rome in the near future, a Jewish official involved in ties with the Vatican said.

Ties between the Jewish community and the Vatican have been on a historic upswing since Vatican II, under the leadership of Pope John XXIII, rejected the doctrine of deicide, which held Jews collectively responsible for the death of Jesus Christ. Pope John Paul II, who lived through the Holocaust in Poland, was also viewed as extraordinarily forthcoming toward Jews and Jewish concerns.

Rabbi Alan Iser, an adjunct professor of theology at Saint Joseph’s University and at nearby Villanova University, said Francis’ opposition to anti-Semitism stands on the foundations set by his predecessors. “I don’t think he has broken new ground,” Iser said. “He didn’t add much to the work his predecessors John Paul and Benedict had done.”

But many experts and Jewish communal officials believe that Francis, whose papacy began in March 2013, has taken this relationship to a new level. His papacy, they say, is one that combines a strong commitment to eradicating anti-Semitism from the Catholic Church with a unique personal approach and closeness to the Jewish community.

Francis is the first pope whose original ordination as a priest took place after Nostra Aetate, the seminal policy document that rejected the church’s charge of deicide against the Jews. “He had the chance to implement Nostra Aetate for decades,” Marans said. “It’s a different level of the process, compared to his predecessors.”

It is not yet clear if Pope Francis will mention the 50th anniversary of the Nostra Aetate during his visit, but just before he arrives in Philadelphia, a symbolic event will take place at Saint Joseph’s University. The school will unveil a new sculpture, “Synagoga and Ecclesia in Our Time.” The title is a reference to a sculpture that adorned many medieval churches. It depicted the victory of Ecclesia, the church, over Synagoga, a blindfolded woman who, looking down, represented Judaism. In the new sculpture, both women are equal, sitting together and looking at each other’s text. Skorka, Francis’s close rabbinic friend, will unveil the statue.

Francis is also the first pope who did not have any direct contact with the Holocaust, noted Marshall Breger, a law professor at The Catholic University’s Columbus School of Law who had been involved in decades of interreligious meetings between Jews and Catholics. Growing up in Argentina, the future pontiff had only secondhand knowledge of the historic genocide. Nevertheless, said Breger, who is a traditionally observant Jew, “he has shown tremendous openness to the spiritual concerns and sensitivities Jews have.”

It is his forceful rejection of anti-Semitism combined with his personal ties to Jews that makes Francis stand out. “He follows the direction set in the Nostra Aetate in words and deeds,” said Rabbi David Sandmel, director of interfaith affairs at the Anti-Defamation League. Sandmel noted that Francis could have an impact on battling anti-Semitism, which is still relatively high in Latin America and among Latinos in the United States. “When there are pictures of the pope and a rabbi embracing, that is going to have an effect,” he said.

Much of Francis’s appeal to American Jews, however, stems less from his theology than from his approach to political issues. Francis has taken on the cause of fighting poverty and inequality in the world. He also was the first pope to issue an encyclical on global warming, and has recently called on all churches in Europe to take in at least one family of refugees. Taken together, fighting poverty, countering global warming and opening the gates to immigrants make up a priority list very similar to that of many American Jews.

“His message is one of outreach to the fringe, and that is why he’s being heard beyond Christianity,” Marans said.

During his papacy thus far, Francis has not taken action on the two main issues that still divide the Jewish community and the Vatican: the canonization of Pope Pius XII, whose actions during World War II are still in dispute, and the opening of the Vatican’s wartime archives to researchers who seek to determine the role the Holy See played during the Holocaust.

He has also avoided most Middle East-related foreign policy controversies, although some supporters of Israel took issue with his recognition of a Palestinian state and with his prayer stop along the Israeli-built separation barrier during his visit to Israel and the Palestinian territories in May 2014.

Visotzky met Pope Francis while teaching at the Pontifical University of St. Thomas Aquinas, in Rome. “I told him, ‘I bring a blessing from the Jews of America,’ and he said, ‘Rabbi, pray for me,’” Visotzky recalled. “So we’re all praying for him.”

Posted by hereisjorgebergoglio at 4:44 PM