...the apple doesn't drop far from the tree "Funnye has already made headlines. He’s the cousin of Michelle Obama and the first African American to join the Chicago Board of Rabbis. He has spent his career redrawing racial and religious boundaries. In sermons Funnye quotes from Malcolm X, Marcus Mosiah Garvey and old spirituals, but also Rabbi Abraham Joshua Heschel, Rabbi Louis Jacobs and the Talmud." "Funnye studied at the Israelite rabbinical academy but also decided to enroll in Spertus Institute for Jewish Learning and Leadership in Chicago. And, after consulting his Israelite rabbi, Funnye also went through a conversion in a Conservative rabbinical court.

“I know who I am,” said Funnye, recalling his thought process and decision to go through a conversion. “I just want you to be comfortable, too.”

Unlike some of his predecessors, Funnye said, he didn’t feel like the conversion took anything away from his being an Israelite. It would also open doors.

“I am an Israelite and a Jew,” Funnye said. “We’re not trying to emulate or pattern ourselves after any Jewish community. We are our own community.”" 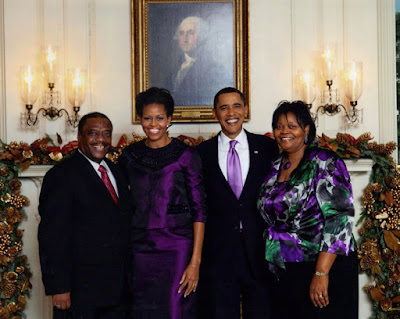 Barack and Michelle have a standing invitation to visit Funnye's Chicago congregation of multiethnic Jews -- "and when I see them, I'm going to remind them," Funnye said.

Funnye is also counting on an invitation to the White House, where his Aunt Marian, Michelle's mother, will be living with the family. Funnye and his wife visited the White House last year, when they were invited to a Chanukah reception.

"If I can visit the White House when George W. Bush is president, I will surely visit when Barack Obama is president," he said." "During his 30 years of leadership in Chicago, Funnye’s synagogue in Chicago emerged as one of the most popular Israelite congregations in the country. He was accepted on the Chicago Board of Rabbis (making him the first Israelite to sit on any city board) and is also board president at the city’s Jewish Council of Urban Affairs.

Rabbi Debra Newman Kamin, spiritual leader of Am Yisrael, a Conservative synagogue in Chicago, has watched Rabbi Funnye’s steady rise as a leader. Twenty five years ago, Rabbi Kamin says, his congregation was a “mystery to Chicago Jewry.” Now Rabbi Kamin regularly visits his synagogue with her congregants. “He has worked hard to be part of the Jewish community.”

Michael B. Oren, former Israeli ambassador to the U.S. and close friend of Funnye’s, flew in for the weekend. “You are part of the Jewish people,” said Oren, speaking to a crowd of Israelites. “You are a part of the nation state. And we are proud and delighted to have you.”

On a drizzling afternoon in Chicago, the board presented Funnye with a signed scroll, giving him his new authority as chief. The sun, struggling to break through all morning, finally did. The sanctuary was bathed in light." 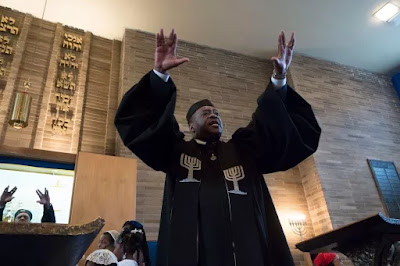 Posted by hereisjorgebergoglio at 11:57 AM