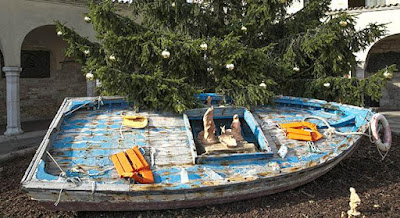 That's a creche inside a boat, which carried Moslem
invaders to Italy, at the base of a Christmas tree.

You can't make this stuff up!  Assisi's Christmas tree and nativity scene was lit by remote control by none other than Francis while he was at the Vatican.  The manger was built into a 23 foot boat used by Moslem invaders to travel from Tunisia to the Italian Island of Lampedusa in 2014.  The lighting ceremony was sponsored by Caritas of Assisi and attended by 31 of the invaders from Afghanistan, Cameroon, Nigeria, and Syria.  Don't worry even though Francis wasn't in attendance, he sent the Prefect of the Pontifical Household, Archbishop Georg Gänswein to impart a blessing.   Gänswein also celebrated Mass in the Basilica before the lighting ceremony.  Afterwards the Italian Navy distributed toys to families in need rather than defend Italy's borders. 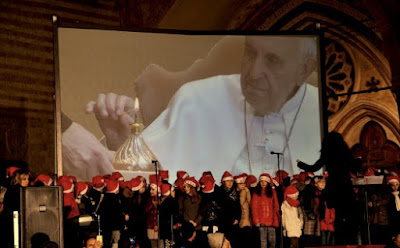 During his online conference call Francis lit an oil candle for 'migrants' symbolizing 'hope' at the same moment the Christmas tree was illuminated at St. Francis’ Basilica in Assisi.   Francis then shared a few words of 'wisdom': [bold bracketed comments are Call Me Jorge...'s]


"Watching that boat ... Jesus is always with us, even in difficult times. [including those who reject Him] How many brothers and sisters have drowned at sea! [remember Moslems are our sisters and Protestants are our brothers] They are with the Lord now. [everyone goes to heaven except for fundamentalist Catholics] But He came to give us hope, and we must take this hope. He came to tell us that He is stronger than death, that He is greater than any evil. He came to tell us he is merciful, all mercy; and this Christmas I invite you to open your hearts to mercy and forgiveness. [Show these invaders mercy and forgive them for destroying your country]  But it is not easy to forgive these massacres. It's not easy.

I would like to thank the (members of the) Coast Guard: the good men and women. [who let the Moslem invaders in and refuse to defend Italy's borders] I thank you, for you were the instrument of hope that brings us Jesus. You, among us, you have been sowers of hope, the hope of Jesus. [Francis' "hope of Jesus" is the death of Catholic Italy] Thank you, Antonio, you and all your teammates and all that this land of Italy has so generously received: the South of Italy is an example of solidarity for the whole world! [Southern Italy has been ruined by these Moslems] For everyone who looks at the crib, they can say to Jesus: "But, I also have lent a hand because you are a sign of hope."

And to all refugees, I say a word, that of the prophet: Raise your head, the Lord is near. And with him is strength, salvation, hope. The heart, perhaps, [is] sorrowful, but the head [is] high in the hope of the Lord." [Is this what Francis considers evangelizing?]


Unbelievable, no it's Francis!  When St. Francis of Assisi was inspired with the idea of a creche in 1223 A.D.,  it was to honor Our Lord's birth.  Here we have Francis perverting Catholic tradition, taking the focus away from Our Lord and instead placing it on Moslem invaders (who are in the process of destroying Christian Europe) and how Europe should welcome them with open arms.  Compare Francis' pathetic boat-manger and his words above to the account St. Bonaventure wrote of St. Francis' Presepio whose purpose was to increase devotion to Our Lord. 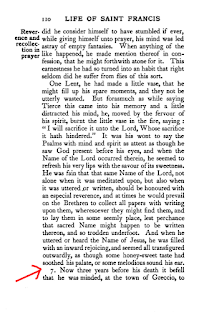 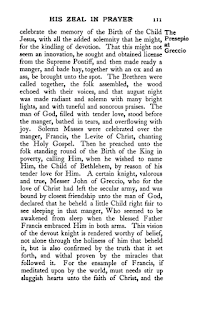 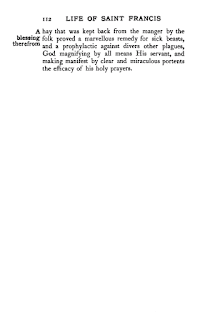 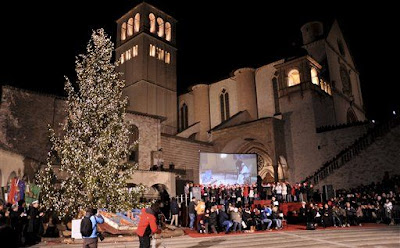 We doubt, St. Francis of Assisi would be impressed.


Is this man St. Francis of Assisi wrote of, actually Francis?

St. Francis of Assisi,
Great Schisms and Tribulations in the Church

Act bravely, my Brethren; take courage, and trust in the Lord. The time is fast approaching in which there will be great trials and afflictions; perplexities and dissensions, both spiritual and temporal, will abound; the charity of many will grow cold, and the malice of the wicked will increase.  The devils will have unusual power, the immaculate purity of our Order, and of others, will be so much obscured that there will be very few Christians who will obey the true Sovereign Pontiff and the Roman Church with loyal hearts and perfect charity. At the time of this tribulation a man, not canonically elected, will be raised to the Pontificate, who, by his cunning, will endeavour to draw many into error and death.  Then scandals will be multiplied, our Order will be divided, and many others will be entirely destroyed, because they will consent to error instead of opposing it.  There will be such diversity of opinions and schisms among the people, the religious and the clergy, that, except those days were shortened, according to the words of the Gospel, even the elect would be led into error, were they not specially guided, amid such great confusion, by the immense mercy of God.  Then our Rule and manner of life will be violently opposed by some, and terrible trials will come upon us. Those who are found faithful will receive the crown of life; but woe to those who, trusting solely in their Order, shall fall into tepidity, for they will not be able to support the temptations permitted for the proving of the elect.  Those who preserve their fervour and adhere to virtue with love and zeal for the truth, will suffer injuries and, persecutions as rebels and schismatics; for their persecutors, urged on by the evil spirits, will say they are rendering a great service to God by destroying such pestilent men from the face of the earth. But the Lord will be the refuge of the afflicted, and will save all who trust in Him. And in order to be like their Head [Jesus Christ], these, the elect, will act with confidence, and by their death will purchase for themselves eternal life; choosing to obey God rather than man, they will fear nothing, and they will prefer to perish [physically] rather than consent to falsehood and perfidy.  Some preachers will keep silence about the truth, and others will trample it under foot and deny it. Sanctity of life will be held in derision even by those who outwardly profess it, for in those days Jesus Christ will send them not a true Pastor, but a destroyer.