A reading from the koran at Christmas Mass 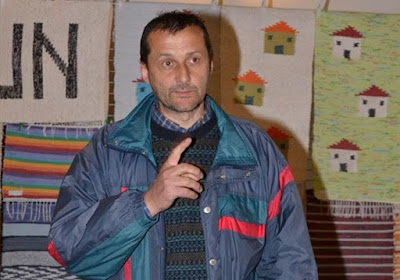 Yep, you guessed it! This man is a priest. His name is don Giusto della Valle.
His parish is San Martino di Rebbio (Como), Italy.

Don della Valle is a lover of the Islamic faith.  Like Francis, della Valle also has a big soft spot for “refugees” whether they come from Africa, the Middle East, or Asia.  Want to practice your heretical faith but don't have a building?  Don Giusto will make an arrangement with you.  Not only does he fast during Ramadan with moslems he also celebrated Eid al-Fitr.  He has even coined a term for doing this and calls himself a “Ramadan Catholic”.  In 2011 he requested the city of Como to, “reopen the mosque”.  He feels he is correct and has said in the past,

“that Christmas should be a time of meeting between people, between the representatives of different religions in full mutual respect.They can build bridges of dialogue freely between people and religions, using a time that you could use to create peace in our surroundings.”


After all don Guisto sees an ally in Francis,

“It seems to me that the lines of Pope Francis on integration indicate exactly which path to follow.” 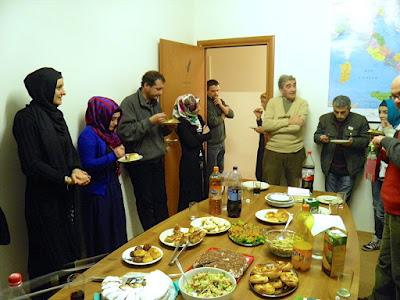 Don Giusto della Valle in 2012 spending the Christmas season with Turkish Moslems.
He is on the left eating from a plate between the women


On the blog for the Parish of St. Martin of Rebbio - Como there is post for Christmas Day titled,
un Buon Natale speciale alla comunità di Rebbio, nel segno del dialogo interreligioso.  Below we translate the introduction to the post and then cover some of what was said.

A special Merry Christmas to the community of Rebbio, under the banner of interreligious dialogue

This morning at the end at the end of the celebration of Christmas Mass of 10am, the parish community of Rebbio upheld the cultural association  Assirat (COMO), Associazione Culturale that takes care of the Lebanese Shiite Muslim community in Italy.

It was, in my opinion, thanks to the work carried out by don Giusto in recent years, a great moment of dialogue with his eyes on the horizon always directed towards peace, very important in this period of religious misunderstandings. (Ed. opinion of Marco Ponte) 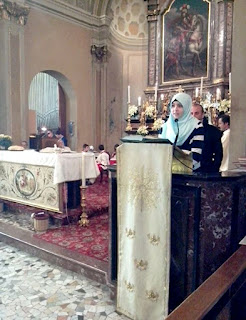 Nour Fayed reading from the koran from the pulpit.


In the name of God, Most Gracious, Most Merciful
When the angels said: "O Mary, Allah gives you good tidings of a Word from Him: his name is the Messiah, Jesus son of Mary, honored in this world and the hereafter, and one of the closest.
Holy Quran 3-45 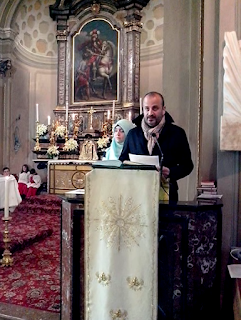 Abdul Aziz giving a speech from the pulpit.


Nour Fayad was followed by Abdul Aziz who gave a speech. Excerpts below:

[...]This year the date of his birth coincides with that of the Prophet Muhammad, peace and blessings be upon him.

In recent times all conflicts in the world have brought division and mistrust between peoples and religions. But God willed that these holy days coincided to make it a symbol of closeness and brotherhood and to indicate to us that there is no distance or difference in the way to God.

I come from Lebanon ... the land of the cedars, the village of Cana, where Jesus did the first miracle, where there have been miraculous transformations, and we hope for a prominent appearance of the Messiah to this world to transform the whole 'hatred into love and enmity in brotherhood,

I am honored to be with you, as a Muslim, in this church to homage on the occasion of this holy celebration, because we are brothers in creation.

We cling to the rope of God and from there proclaim our message that there is no compulsion in religion and that religion of God on earth is love, coexistence and peace.

Who says he has no other religion.

Accepting our presence between you, your party, it's a sign that, God willing, we all cling to His rope, and we set off together on His straight path.

Thank you, don Giusto for over three years ago he opens the doors of this parish to celebrate the events and cultural rituals of our faith and for giving me a chance to be here to bring our message... 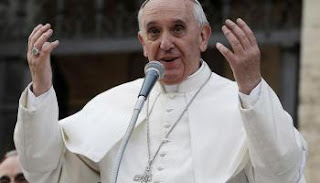 So is don della Valle correct in saying he believes he is following Francis on the path he set?  We at Call Me Jorge... would have to say yes.  In Francis’ apostolic letter, Misericordiae Vultus, in section 23 one reads:


23. There is an aspect of mercy that goes beyond the confines of the Church. It relates us to Judaism and Islam, both of which consider mercy to be one of God’s most important attributes. Israel was the first to receive this revelation which continues in history as the source of an inexhaustible  richness meant to be shared with all mankind. As we have seen, the pages of the Old Testament are steeped in mercy, because they narrate the works that the Lord performed in favour of his people at the most trying moments of their history. Among the privileged names that Islam attributes to the Creator are “Merciful and Kind”. This invocation is often on the lips of faithful Muslims who feel themselves accompanied and sustained by mercy in their daily weakness. They too believe that no one can place a limit on divine mercy because its doors are always open.

I trust that this Jubilee year celebrating the mercy of God will foster an encounter with these religions and with other noble religious traditions; may it open us to even more fervent dialogue so that we might know and understand one another better; may it eliminate every form of closed-mindedness and disrespect, and drive out every form of violence and discrimination.

Happy whatever don Guisto & his “Ramadan Catholics” call it!
Posted by hereisjorgebergoglio at 3:48 PM