Krzysztof Wtorek will perform at World Youth Day 2016 for Francis!

And bring Polish Novus Ordo Evangelization
to the youth. 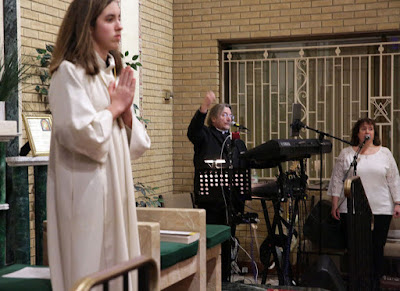 Fr. Krzysztof Wtorek performs at his rock-gospel mess of 13 March 2016.


The aim of Wtorek's music is to make people happy. People want to be happy, he said, and the desire for happiness without God sometimes drives them to do things that are self-destructive, such as turning to drugs.

"This is really evangelisation," he said of his music. "You can be happy. You can be peaceful. You can be meditative," Wtorek said. "I believe in that. I put my life into that."

bringing Francis message to the world!


In each of Wtorek's parish assignments since his ordination in 1995, he has cultivated a music ministry. He was assigned in 2009 to Saint James Church in Ventnor. When the Longort, Margate and Ventnor churches merged into one parish, Holy Trinity, in 2010, he became the associate pastor for all the churches.

Since Wtorek has been doing the rock-gospel mass on Sundays, it's attendance has grown from 30 people at the start to 150 people during the off season to as many as 220 people during the summer, said Basil DiCerbo, the church's Eucharistic minister.

The start of the international gospel-rock group can be traced to eight years ago when Wtorek visited Poland. One of his friends called and asked him to stop in Germany before heading back to this country. Wtorek, whose main instrument is the bass guitar, was asked to play bass with a 98-voice German choir, which sang gospel music, at a concert in a castle.

singing the Our Father


"I think it's a great way to spread the good news of the Lord and to bring people closer to Jesus," she said.

None of this would be happening if not for Wtorek's earlier life as a rock musician. The priest still keeps his hair in a ponytail and sports a beard and mustache from his rebellious rock days.

Wtorek said he learned to play songs such as the Animals' "The House of the Rising Sun" by listening to Polish radio. It's a song he still can play to this day.

Wtorek's days as a rock musician lasted from age 16, when he started in garages, to age 23, when his band, Astat, was able to play in theater-size venues.

When Wtorek came to the United States in 1988 and entered the seminary, he thought his life as a musician was over. Instead, he has found himself creating updated arrangements of traditional hymns, using a variety of instruments and computer software.

if one hasn't suffered enough already...
here is 1 hour plus of his screeching & rambling


Source for the above text and single photo is from press of Atlantic City's article, Longport priest to bring rock-gospel to Pope Francis.
Posted by hereisjorgebergoglio at 12:09 AM