Will the ride ever end?

“I think, and this is the other aspect of things, that this pope who tells anyone who will listen that we are Catholic, who says and repeats that the Society is Catholic, that we are Catholic, will never condemn us, and that he wants our ‘case’ taken care of. I think– and he has already started down this path – that when he sees that we cannot agree with the Congregation of the Faith, I think that he will overreach any doctrinal, theoretical, practical condition, or any condition whatsoever… He is going to take his own steps towards recognizing the Society. He has already begun; he is simply going to continue. And I am not saying what I desire but what I foresee. I foresee, I think that the pope will lean towards a one-sided recognition of the Society, and that by acts rather than by a legal or canonical approach.”

The same day that DICI released highlights from the conference of Bp. de Galarreta, ZENIT coincidently publishes a lengthy interview with the Secretary to the Pontifical Commission Ecclesia Dei, Abp. Guido Pozzo. 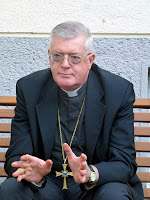 Extracts of Archbishop Pozzo's interview, given to Luca Marcolivio and published in Zenit, A che punto è il dialogo con i lefebvriani?


About the status of the Society of St. Pius X
The SSPX is still in an irregular position, because it has not received canonical recognition by the Holy See. As long as the Society has no canonical status in the Church, its ministers do not exercise in a legitimate way the ministry and the celebration of the sacraments. According to the formula endeavored by the then Cardinal Bergoglio in Buenos Aires and confirmed by Pope Francis to the Pontifical Commission Ecclesia Dei, the members of the SSPX are Catholics on the path toward full communion with the Holy See. This full communion will come when there is a canonical recognition of the Society.

What steps has the Holy See taken?
Following the lifting of the excommunications in 2009, a series of meetings were initiated between doctrinal experts appointed by the Congregation for the Doctrine of the Faith, which oversees the Pontifical Commission Ecclesia Dei, after the motu proprio of Benedict XVI, Unitatem Ecclesiae (2009), and experts of the SSPX to discuss and exchange views on major doctrinal issues underlying the dispute with the Holy See: the relationship between Tradition and the Magisterium, the questions of ecumenism, interreligious dialogue, religious freedom, and of the liturgical reform, in the context of the teaching of the Second Vatican Council.

We are now at a stage that I believe constructive and oriented to achieve the desired reconciliation. The gesture of Pope Francis to grant to faithful Catholics the opportunity of receiving validly and lawfully the sacraments of reconciliation and anointing of the sick by the bishops and priests of the SSPX during the Holy Year of Mercy is clearly a sign of the will of the Holy Father to favor the path towards a full and stable canonical recognition.

What obstacles remain?
I would distinguish two levels. The proper doctrinal level concerns some differences about individual topics proposed by the Second Vatican Council and the post-conciliar Magisterium relating to ecumenism, the relationship between Christianity and the world religions, religious freedom, especially in the relationship between Church and State, and some aspects of liturgical reform. There is also the level of mental and psychological attitudes, which is to move from a position of polemical and antagonistic confrontation, to a position of listening and mutual respect, esteem and confidence, as it should be between members of the same Body of Christ, which is the Church. We need to work on both of these levels. I think the rapprochement undertaken has borne some fruit, especially for this change in attitude by both parties and it is worth pursuing that.

Even on the issue of the Second Vatican Council, I think that the SSPX must reflect on the distinction ...between the authentic mens of Vatican II, itsintentio docendi, as shown by the official Acts of the Council, and that I would call the "para-council", i.e., the set of theological guidelines and practical attitudes which accompanied the course of the Council itself, then pretending to cover themselves with its name, and that the public, thanks to the influence of the media, overlapped often as the true thought of the Council.

Also as regards the Lefebvrian criticism on religious freedom, at the bottom of the discussion it seems to me that the SSPX position is characterized by the defense of traditional Catholic doctrine against the agnostic secularism of the State and against secularism and ideological relativism but not against the right of the person not to be constricted or obstructed by the State in the exercise of the profession of religious faith. However, these are issues that will be a topic for discussion and clarification even after the full reconciliation.

What appears crucial is to find a full convergence on what is required to be in full communion with the Apostolic See, namely the integrity of the Catholic Creed, the bond of the sacraments and the acceptance of the Supreme Magisterium of the Church. The Magisterium, which is not above the Word of God written and transmitted, but serves it, is the authentic interpreter also of previous texts of the Magisterium, including those of the Second Vatican Council, in the light of the perennial Tradition, which develops in the Church with the assistance of the Holy Spirit, not with a novelty contrary (which would deny Catholic dogma), but with a better understanding of the Deposit of Faith, in the same doctrine, the same sense, and in the same judgment (in eodem scilicet dogmate, eodem sensu et eademque sententia, cf. Vatican Council I, Const. Dogm. Dei Filius, 4). I believe that on these points the agreement with the SSPX is not only possible, but necessary.

I do not think that the SSPX has denied a doctrine of faith or the truth of the Catholic doctrine taught by the Magisterium. The criticisms concern instead statements or claims regarding the renewed pastoral care and ecumenical relations with other religions, and some issues of prudential order in the relationship between Church and society, Church and State. On liturgical reform, I will only mention a statement that Archbishop Lefebvre wrote to Pope John Paul II in a letter dated March 8, 1980:


“About the Mass of the Novus Ordo, despite all the reservations that one has to do about it, I never claimed that it is invalid or heretical.”

Therefore the reservations about the rite of the Novus Ordo, which are obviously not to be underestimated, do not refer either to the validity of the celebration of the sacrament nor the line of the Catholic Faith. It would therefore be appropriate to continue the discussion and clarification of these reservations.

About the gesture of Pope Francis
The Holy Father encouraged the Pontifical Commission Ecclesia Dei from the start of his pontificate to pursue a less official and less formal [dialogue] with the SSPX. In this context, the soothing and magnanimous gesture of Pope Francis on the occasion of the Year of Mercy has undoubtedly helped to calm further the state of relations with the Society, showing that the Holy See has at heart the rapprochement and reconciliation which will also need a canonical form. I hope and wish that the SSPX shares the same feeling and the same will.

source: Where are we with the SSPX?—Abp. Pozzo
Abp. Pozzo's remarks were translated from Italian into English by the FSSPX 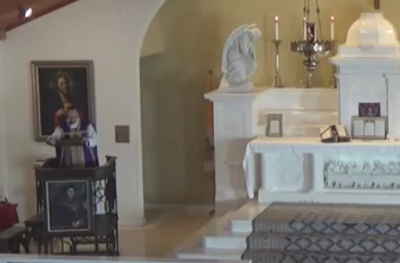 Then on 28 February 2016, Fr. Vernoy gave a sermon at St. Thomas More Chapel in Sanford, Florida in which he expounds on Bp. Fellay and the SSPX’s talks with Francis and the Vatican.  This sermon was pulled down from youtube shortly after it was posted. The blog Non Possumus had a copy of it and posted the relevant excerpt pertaining to the matter.

Excerpt from the 3rd Sunday of Lent Sermon of Fr. Marc Vernoy


Excerpt transcribed by Call Me Jorge...

“A few words or so because most of you have heard about uh what uh Bp. uhh de Galarreta told regarding uh the possible recognition of the Society, which has never been validly suppressed.

Uh, the priests of the Society since December 8th  receive before we were using the extraordinary jurisdiction for the confession.  Since December 8th we received the faculty directly from the Holy Father. It is the only case in the Church.  Uh, usually you go  through some congregations, some dioceses, etcertera.  All the priests of the Society received their powers directly from the pope.  That is pretty strong. [chuckles] It was already strong but uh. And uh it is very possible -we had conferences with Bp. Fellay in uh January about this topic uhh that the Pope will regularize the Society as it is, with uh lots of guarantees and without asking us anything.

Uh, it's part of the things that you can not explain, there are many things we cannot explain about the history of the Society since its beginnings in this crisis of the Church. Then uh, uh you, we can easily see the finger of God in many ways, in many ways.

After uh some will uh be very suspicious we have to be providential for sure but I tell you that our superiors are very prudent to protect our works to protect our priests, and whatever uh could happen.


Uh, if ever it happens, uh in the history of the Church it will be something absolutely special: we will be a congregation directly uh, uh receiving their powers directly from the Pope and uh, uh having uh a very, very special jurisdiction all over the world. It is something uh that only the Apostles had in the history of the Church.  And continue to pray. Uh, we are in time when special things are happening.

Big catastrophes, this is what we are witnessing with uh all these crisis not only in the Church, in the whole Society its just a catastrophe.  But God is there. If you hear you know why. And you know that all of you, if you hear it is also because of some miracles. Not only you, because God is behind you, the grace of God is after you. And God blessed you here, and that is why we call we must continue to have confidence. If you have no confidence we have nothing to do here.  Its because you don't believe in the grace of God.

And if we offered that, how could we say no? It is not Catholic, absolutely not Catholic. There, there is an authority, they can think whatever about this practical authority, but it is there, and to deny formally the authority puts yourself in the state of mortal sin.”

Posted by hereisjorgebergoglio at 12:42 PM