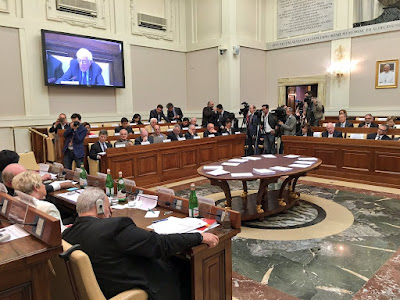 Bernie’s speaking at the Vatican today.  Bernie is for usury, as long as it isn’t exorbitant. 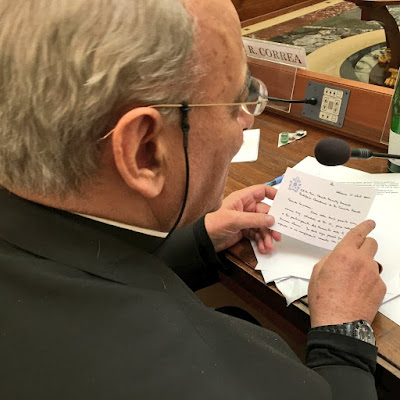 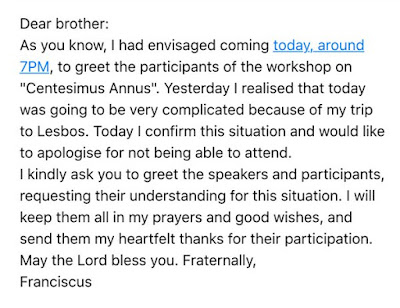 
Stalinist Bernie at the Vatican

Bernie Sanders’ Address to The Pontifical Academy of Social Sciences
The Urgency of a Moral Economy: Reflections on the 25th Anniversary of Centesimus Annus
15 April 2016

I am honored to be with you today and was pleased to receive your invitation to speak to this conference of The Pontifical Academy of Social Sciences. Today we celebrate the encyclical Centesimus Annus and reflect on its meaning for our world a quarter-century after it was presented by Pope John Paul II. With the fall of Communism, Pope John Paul II gave a clarion call for human freedom in its truest sense: freedom that defends the dignity of every person and that is always oriented towards the common good.

The Church’s social teachings, stretching back to the first modern encyclical about the industrial economy, Rerum Novarum in 1891, to Centesimus Annus, to Pope Francis’s inspiring encyclical Laudato Si’ this past year, have grappled with the challenges of the market economy. There are few places in modern thought that rival the depth and insight of the Church’s moral teachings on the market economy.

Over a century ago, Pope Leo XIII highlighted economic issues and challenges in Rerum Novarum that continue to haunt us today, such as what he called “the enormous wealth of a few as opposed to the poverty of the many.”

And let us be clear. That situation is worse today. In the year 2016, the top one percent of the people on this planet own more wealth than the bottom 99 percent, while the wealthiest 60 people – 60 people – own more than the bottom half – 3 1/2 billion people. At a time when so few have so much, and so many have so little, we must reject the foundations of this contemporary economy as immoral and unsustainable.

The words of Centesimus Annus likewise resonate with us today. One striking example:

Furthermore, society and the State must ensure wage levels adequate for the maintenance of the worker and his family, including a certain amount for savings. This requires a continuous effort to improve workers’ training and capability so that their work will be more skilled and productive, as well as careful controls and adequate legislative measures to block shameful forms of exploitation, especially to the disadvantage of the most vulnerable workers, of immigrants and of those on the margins of society. The role of trade unions in negotiating minimum salaries and working conditions is decisive in this area. (Para15)

The essential wisdom of Centesimus Annus is this: A market economy is beneficial for productivity and economic freedom. But if we let the quest for profits dominate society; if workers become disposable cogs of the financial system; if vast inequalities of power and wealth lead to marginalization of the poor and the powerless; then the common good is squandered and the market economy fails us. Pope John Paul II puts it this way: profit that is the result of “illicit exploitation, speculation, or the breaking of solidarity among working people . . . has not justification, and represents an abuse in the sight of God and man.” (Para43).


We are now twenty-five years after the fall of Communist rule in Eastern Europe. Yet we have to acknowledge that Pope John Paul’s warnings about the excesses of untrammeled finance were deeply prescient. Twenty-five years after Centesimus Annus, speculation, illicit financial flows, environmental destruction, and the weakening of the rights of workers is far more severe than it was a quarter century ago. Financial excesses, indeed widespread financial criminality on Wall Street, played a direct role in causing the world’s worst financial crisis since the Great Depression.

We need a political analysis as well as a moral and anthropological analysis to understand what has happened since 1991. We can say that with unregulated globalization, a world market economy built on speculative finance burst through the legal, political, and moral constraints that had once served to protect the common good. In my country, home of the world’s largest financial markets, globalization was used as a pretext to deregulate the banks, ending decades of legal protections for working people and small businesses. Politicians joined hands with the leading bankers to allow the banks to become “too big to fail.” The result: eight years ago the American economy and much of the world was plunged into the worst economic decline since the 1930s. Working people lost their jobs, their homes and their savings, while the government bailed out the banks.

Inexplicably, the United States political system doubled down on this reckless financial deregulation, when the U.S. Supreme Court in a series of deeply misguided decisions, unleashed an unprecedented flow of money into American politics. These decisions culminated in the infamous Citizen United case, which opened the financial spigots for huge campaign donations by billionaires and large corporations to turn the U.S. political system to their narrow and greedy advantage. It has established a system in which billionaires can buy elections. Rather than an economy aimed at the common good, we have been left with an economy operated for the top 1 percent, who get richer and richer as the working class, the young and the poor fall further and further behind. And the billionaires and banks have reaped the returns of their campaign investments, in the form of special tax privileges, imbalanced trade agreements that favor investors over workers, and that even give multinational companies extra-judicial power over governments that are trying to regulate them.

But as both Pope John Paul II and Pope Francis have warned us and the world, the consequences have been even direr than the disastrous effects of financial bubbles and falling living standards of working-class families. Our very soul as a nation has suffered as the public lost faith in political and social institutions. As Pope Francis has stated: “Man is not in charge today, money is in charge, money rules.” And the Pope has also stated: “We have created new idols. The worship of the golden calf of old has found a new and heartless image in the cult of money and the dictatorship of an economy which is faceless and lacking any truly humane goal.”

And further: “While the income of a minority is increasing exponentially, that of the majority is crumbling. This imbalance results from ideologies which uphold the absolute autonomy of markets and financial speculation, and thus deny the right of control to States, which are themselves charged with providing for the common good.”

Pope Francis has called on the world to say: “No to a financial system that rules rather than serves” in Evangeli Gaudium. And he called upon financial executives and political leaders to pursue financial reform that is informed by ethical considerations. He stated plainly and powerfully that the role of wealth and resources in a moral economy must be that of servant, not master.

The widening gaps between the rich and poor, the desperation of the marginalized, the power of corporations over politics, is not a phenomenon of the United States alone. The excesses of the unregulated global economy have caused even more damage in the developing countries. They suffer not only from the boom-bust cycles on Wall Street, but from a world economy that puts profits over pollution, oil companies over climate safety, and arms trade over peace. And as an increasing share of new wealth and income goes to a small fraction of those at the top, fixing this gross inequality has become a central challenge. The issue of wealth and income inequality is the great economic issue of our time, the great political issue of our time, and the great moral issue of our time. It is an issue that we must confront in my nation and across the world.

Pope Francis has given the most powerful name to the predicament of modern society: the Globalization of Indifference. “Almost without being aware of it,” he noted, “we end up being incapable of feeling compassion at the outcry of the poor, weeping for other people’s pain, and feeling a need to help them, as though all this were someone else’s responsibility and not our own.” We have seen on Wall Street that financial fraud became not only the norm but in many ways the new business model. Top bankers have shown no shame for their bad behavior and have made no apologies to the public. The billions and billions of dollars of fines they have paid for financial fraud are just another cost of doing business, another short cut to unjust profits.

Some might feel that it is hopeless to fight the economic juggernaut, that once the market economy escaped the boundaries of morality it would be impossible to bring the economy back under the dictates of morality and the common good. I am told time and time again by the rich and powerful, and the mainstream media that represent them, that we should be “practical,” that we should accept the status quo; that a truly moral economy is beyond our reach. Yet Pope Francis himself is surely the world’s greatest demonstration against such a surrender to despair and cynicism. He has opened the eyes of the world once again to the claims of mercy, justice and the possibilities of a better world. He is inspiring the world to find a new global consensus for our common home.

I see that hope and sense of possibility every day among America’s young people. Our youth are no longer satisfied with corrupt and broken politics and an economy of stark inequality and injustice. They are not satisfied with the destruction of our environment by a fossil fuel industry whose greed has put short term profits ahead of climate change and the future of our planet. They want to live in harmony with nature, not destroy it. They are calling out for a return to fairness; for an economy that defends the common good by ensuring that every person, rich or poor, has access to quality health care, nutrition and education.

As Pope Francis made powerfully clear last year in Laudato Si’, we have the technology and know-how to solve our problems – from poverty to climate change to health care to protection of biodiversity. We also have the vast wealth to do so, especially if the rich pay their way in fair taxes rather than hiding their funds in the world’s tax and secrecy havens- as the Panama Papers have shown.

The challenges facing our planet are not mainly technological or even financial, because as a world we are rich enough to increase our investments in skills, infrastructure, and technological know-how to meet our needs and to protect the planet. Our challenge is mostly a moral one, to redirect our efforts and vision to the common good. Centesimus Annus, which we celebrate and reflect on today, and Laudato Si’, are powerful, eloquent and hopeful messages of this possibility. It is up to us to learn from them, and to move boldly toward the common good in our time.


The cause of what Bernie and Francis lament is usury but neither one is a proponent of wanting it to end.  For neither one wants to bite the hand that feeds them.
Posted by hereisjorgebergoglio at 12:39 PM