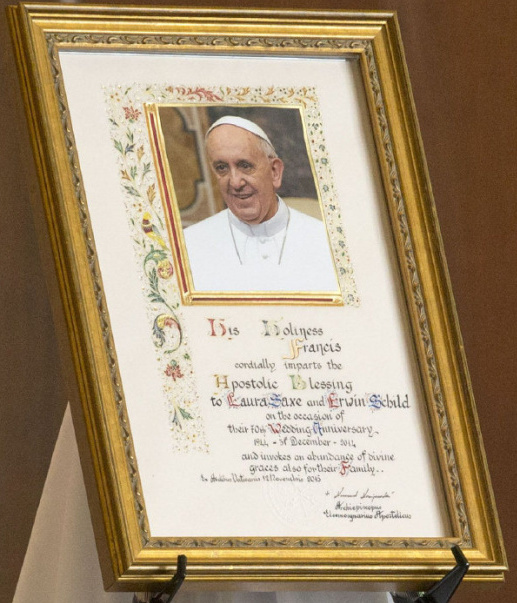 [...]Collins noted that Rabbi Schild, who turns 96 on Wednesday, was a leader who has long promoted positive relations through the Christian Jewish Dialogue of Toronto, which facilitates a better understanding between the two communities.
Schild, who was born in Germany and survived the Dachau concentration camp, was Adath Israel’s spiritual leader from 1947 until 1989. The rabbi, a member of the Order of Canada, was instrumental in building up the conservative congregation, which has more than 1,800 member families.
Rev. Damian MacPherson, director of the office of ecumenical and interfaith affairs for the Roman Catholic Archdiocese of Toronto, who helped push for the papal blessing, said it was an opportunity to honour the rabbi’s work as well as celebrate 70 years of marriage.
“It symbolizes the very success that dialogue has achieved,” he said in an interview. “He is probably the only rabbi in Canada who has received a papal blessing.”
In his address, Schild called the papal blessing “an astounding gift,” which requires “an exception degree of appreciation” on their part.
He added that equality and diversity are the foundations of the ideal society — noting that all human beings are equal, but are not identical. Each is irreplaceable.
“Let there be dialogue and monologue,” he said. “Let me love others for not being my copies.

“And let the diversity of our faiths not divide us, but bring us closer together.”

Why was Francis imparting his Apostolic Blessing upon the 70th Wedding Anniversary of a rabbi emeritus and his wife?
Our thesis at Call Me Jorge... is very simple.
Francis was paying the rabbi back publicly for writing the rough draft of his pontificate!


“Erwin Schild didn’t become a rabbi for nothing, a teacher who has been committed to Jewish-Christian and also Jewish-German dialogue for years. His openness reaches far beyond the Christian and Jewish religious communities. “No group, no religion has an exclusive link to the Lord of the world [sic].” (From Erwin Schild’s talk before Lutheran Christians on Reformation Day 1988 in his home town of Cologne: The World through my Window: Insights and directions of a Canadian rabbi of German descent for life in our time, Cologne 1996.) In the encounter at Dachau, too, one feels his plea to encounter people in love, kindness [charity], to show [them] compassion, humility, and a spirit of sacrifice, to seek to dialogue — in other words, to build bridges. We can find a way to a peaceful world if we “accept responsibility for the world around us, share our bread with the hungry, [and] feel that a languishing child is an intolerable blasphemy against our divine image and likeness.” (The world through my Window, Cologne 1996)” 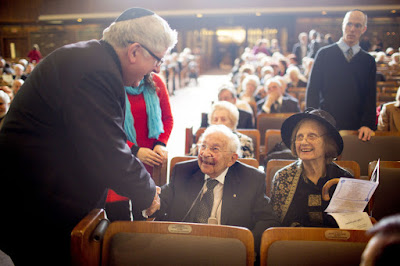 Rabbi Erwin Schild and his wife Laura Saxe Schild being congratulated by
Cardinal Thomas Collins (Archbishop of Toronto) on 6 March 2016
at Adath Israel Congregation where they received their blessing.
Posted by hereisjorgebergoglio at 11:07 AM