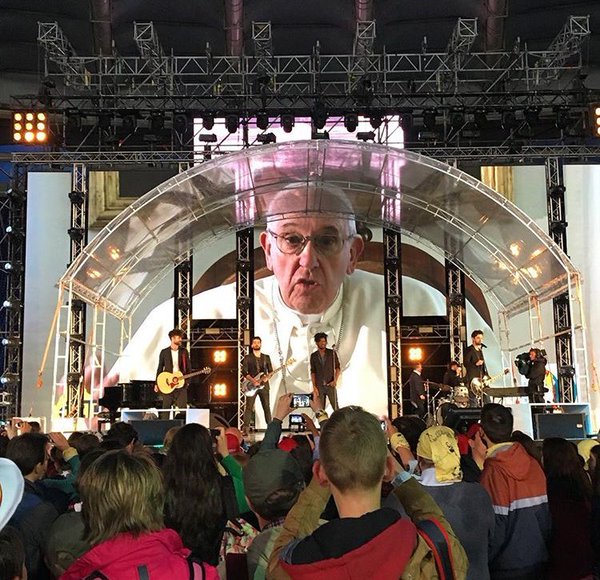 Truth is often stranger than fiction. The photo above has not been photo shopped and was posted to facebook by a Vatcian bureaucrat who works for the Pontifical Council for Social Communications, when he is not busy running Pepper & Darkness Religious Television in Canada.  A big thanks to Thomas ‘three martinis a day’ Rosica for the photo!

If any of the readers of Call Me Jorge... know where to find the video footage of Francis message at the Jubilee for Teens, please leave the link in the comments below. [Thanks to the reader who sent us the video which has now been embedded at the bottom of the entry.]

iPOPE FRANCIS
TO BOYS MEETING IN OLYMPIC STADIUM OF ROME
ON THE OCCASION OF THE JUBILEE OF BOYS AND GIRLS
Saturday, April 23, 2016

You have gathered for a time of celebration and joy. I was not able to come and I'm sorry. So I decided to greet you with this video. I would have loved to be able to come to the Stadium, but am unable to do so ...

I thank you for having accepted the invitation to come here to celebrate the Jubilee in Rome. This morning you have turned Saint Peter's Square into a big confessional and then you crossed the Holy Door. Do not forget that the Door is the encounter with Christ, who introduces us to the Father and asks us to become merciful as He is merciful.

Tomorrow, then, we will celebrate the Mass together. It was right that there was also a place to get together with joy and listen to some important stories, which should help you to grow in faith and in life.

I know you have a bandana with the written works of corporal mercy: put at the head of these works, because they are the style of Christian life. As you know the works of mercy are simple gestures that belong to the life of every day, allowing you to recognize the Face of Jesus in the faces of so many people. Young too! Even young people like you, who are hungry, thirsty; who are refugees or foreigners or sick and need our help, our friendship.

To be merciful means to be able to forgive. And this is not easy! It can happen that, sometimes, in a family, at school, in the parish, in the gym or in places of entertainment someone can do the wrongs and we are outraged; or in some moment of nervousness we can be offend by others. We do not stay with resentment or desire for revenge! There is no use: there is a worm that eats the soul and does not allow us to be happy. We forgive! We forgive and forget the wrong done, so we can understand the teaching of Jesus and be his disciples and be witnesses of mercy.

Guys, how many times I have to ring up my friends, however, it happens that I can not get in touch because there is no signal. I'm sure it happens to you, the phone in some places doesn't work ...

Well, remember that if there is no Jesus in your life it is as if there were no network! They can not talk, and then withdraw into themselves. Let's always be where there is a network! The family, the parish, the school, because in this world we will always have something to say is good and true.

Now I greet you all, I wish you to live with joy the moment and I wait for you all tomorrow in St. Peter's Square. Hello!


Vatican City (AFP) - Happiness is not an app you can download on your mobile phone, Pope Francis told thousands of teenagers on Sunday at a mass to mark a weekend dedicated to youth.
"Freedom is not always about doing what you want. In fact it is the gift of being able to choose the right way," he said in a homily punctuated by regular bursts of applause from the crowd on a packed St Peter's Square.
"Your happiness has no price. It cannot be bought and sold: it is not an application you download on a mobile phone. Even the latest version cannot help you to grow and become free in love."
An estimated 70,000 teenagers were in Rome for a weekend of events to celebrate Francis's Jubilee year dedicated to the theme of mercy.
In a surprise move on Saturday, the 79-year-old pontiff heard confessions from 16 of them and a video message from him was broadcast at a rock and rap concert in the Stadio Olimpico.
One of the teenagers chosen to confess to the leader of the world's 1.2 billion Catholics said she had been trembling as she approached the chair on which the pope was sitting in St Peter's Square.
"But as soon as I sat down I had the feeling of being next to a normal person rather than the pope. Francis is really one of us," Anna Taibi, 15, told La Repubblica newspaper.
The Sicilian teenager said she had been touched by Francis's tenderness as he listened to her confession.
"I expected him to give me a penance ... instead he absolved me and let me go."
The importance of mobile phones to contemporary teenagers was also reflected in Francis's message to the concert.
Clutching an iPhone, he told his audience that living without Jesus was like not having any signal. "Always be sure to go where there is a network: family, parish, school," he said.


The video message played behind the rock band on stage
at the Jubilee of Teens in Rome’s Olympic Stadium
Posted by hereisjorgebergoglio at 5:09 PM