the Jubilee of Rotary 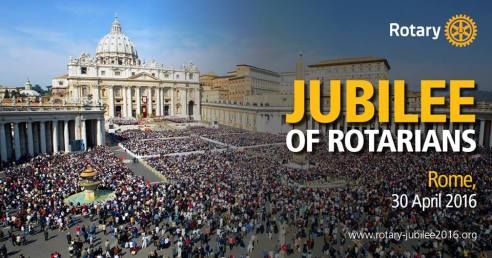 Today (30 April 2016) Francis had a special general audience to which he invited a lot of Rotarians who were in Rome.  The purpose of the Rotarians being in Rome was to participate in a conference organized by the Jesuit Refugee Service with the topic of “Helping Refugees to Start Over”, one of Francis’ pet causes.  Also participating in the discussions were The United Nations Refugee Agency and the United Nations World Food Program.  One couldn’t come up with a set of groups which reflect the one world government mentality more and which are hell bent on de-Christianizing Europe.

This isn’t Francis first interaction with with Rotary International nor his predecessors.  Francis back in 1999 when he was Jorge Mario Bergoglio and only a year into his appointment as the archbishop of Buenos Aires was named a honorary Rotarian.  A few years later in 2005 he was honored as Argentina’s Rotarian of the Year. 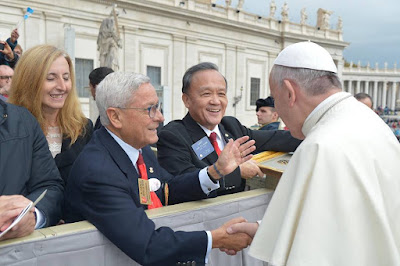 
Francis has such a high opinion of members of the Rotary that he has even employed Rotary International fellow, Juan C. Zarate, on the Vatican’s finance panel.  This feeling though is mutual as Rotarian, Nestor L. Abrematea of the Philippines, got a government resolution passed which declared Francis the ‘Superpope!’ because he weathered typhoon Amang in order to celebrate a Novus Ordo mess with them.

Not all are enamored with Francis or the Rotary as Lucrecia Rego de Planas of Mexico wrote in his open letter to Francis,


“Bergoglio wants to be loved by everyone and please everyone. In this sense one day he will talk on TV against abortion and the next day he will bless the pro abortionist in the Plaza de Mayo; he could give a marvelous talk against the Masons (Masonic Order) and, an hour later, eat and drink with them at the Rotary Club.”

The Vatican closely cooperates with Rotary International especially in the interfaith and interreligious movements.  Dr. Dietmar W. Winkler is one example of this.  He is the Dean of the School of Catholic Theology at the University of Salzburg and has been given grants from the Rotary in order to further these movements.

Francis reserved 8,000 tickets for the Rotary International at today’s general audience and over 9,000 showed up!  Francis is just following in the footsteps of his predecessor, Saint John Paul II who in the Jubilee Year of 2000 welcomed Rotarians on pilgrimage to the Vatican.  At the end of his general audience today, Francis met with Rotary International President K.R. Ravindran.  He encouraged Rotary to continue their programs of vaccinations against polio (in fact, Francis feels so strongly he, “personally vaccinated a child against polio in Mexico this past February.”), promote peace, and push his favorite one-world government goals. 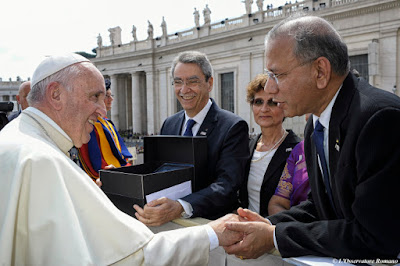 “It is a tremendous honor to be part of this Jubilee Audience. Pope Francis has inspired men and women throughout the world – regardless of their faith – with his humble acts of kindness. His call to alleviate the root causes of extreme poverty and human suffering transcends religion, age, nationalism and politics. Rotary members from every religion, nation and creed share Pope Francis’ spirit of mercy and compassion, which inspires us to act boldly to address the most difficult challenges facing our world today.”


According to Radio Vatican,


“Mr. Ravindran called Pope Francis a model for Rotarians, saying "he is doing exactly what every Rotarian should be doing. So we see a great synergy of thought with this Pope, and being here, receiving his blessing, I think is something quite wonderful for us."

"We are all very excited; we are passionate about this. We have Rotarians who have come from 80 countries to be present, so you can imagine the excitement."

Mr. Ravindran compared the conference on giving refugees a new start to lighting a candle in the darkness. "I realize that trying to take on this whole problem is beyond us. I have to be honest and say that Rotary cannot solve this problem, but rather than cursing the darkness, we can light a candle. I definitely know of many, many Rotary Clubs who in their own small way are doing what they can to give refuge, to educate, to take care, to nurse refugees. So if many of us do what we are doing, then to a large extent the problem gets alleviated."”

Defenders of Francis claim he stands for everything that the Catholic Faith has stood for but now chooses to focus his attention on aspects the pre-Vatican II church ignored such as mercy, compassion, love, spiritual hugs, etc...

Concerns such as this may be why in 1951 the Vatican issued a degree on Rotary groups which stated:


“No Roman Catholic priest, decreed the Sacred Congregation of the Holy Office, may henceforth be a member of Rotary or attend Rotary meetings. Furthermore, laymen, while not forbidden Rotary membership, were exhorted to bear in mind Article 684 of canon law. Excerpt: "The faithful...must guard against associations which are secret, condemned, seditious, suspect, or which try to escape legitimate church vigilance."”


This brings us to ask, is Francis a Catholic when his only concerns are the physical well being of people and not their souls?  Can the dear reader imagine Pius XII or Leo XIII hosting members of the Rotary International much less being a honorary member and accepting awards from them?

Could inviting people such as Rotarians be how Francis is now packing the people into St. Peter’s Square for his audiences?
Posted by hereisjorgebergoglio at 5:46 PM