Can you find Francis?


Yesterday the three day extravaganza known as the Jubilee for Teens began.  It was kicked off by the teens walking through the Holy Door at St. Peter's Basilica.  Today, 150 priests plus Francis heard reconciliations for the teens.  Francis himself heard the reconciliations of sixteen young men and women (13 to 16 years of age) in an one hour period.  The teens were then bused to Rome’s Olympic Stadium where they were to hear an important video message from Francis himself!  Tomorrow Francis will oversee a special Novus Ordo service at St. Peter’s Square where an expected crowd of 70,000 will gather.  The theme is the same as the Jubilee of Mercy - ‘Growing merciful like the Father’. 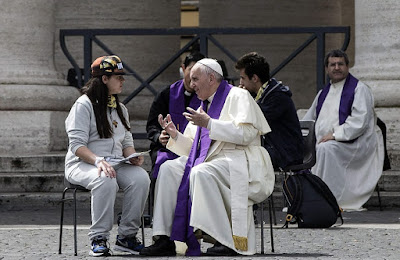 Did Francis admonish this young lady for dressing like a man? 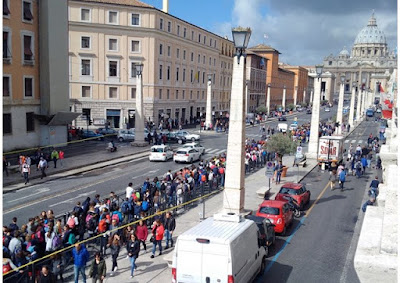 Youngsters cued up to go to St. Peter’s Square.


It’s never a dull day with Francis around! 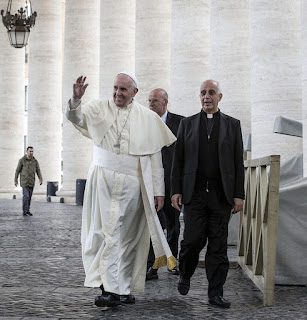 Posted by hereisjorgebergoglio at 1:45 PM

Email ThisBlogThis!Share to TwitterShare to FacebookShare to Pinterest
Labels: Holy Door, Jubilee, Jubilee for Teens, Jubilee of Mercy, message for the jubilee of mercy for young boys and girls, reconciliation, Sacrament of Reconciliation, Where’s Francis?