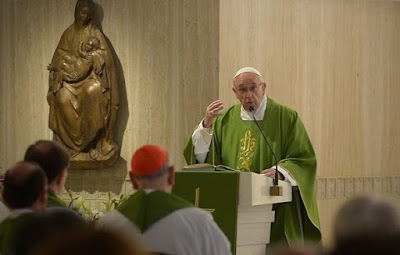 During his homily at Casa Santa Marta on Thursday 19 May 2016, Francis condemned himself with his own words.  The following three paragraphs are excerpted from Radio Vaticana,  Pope: the rich who exploit the poor are bloodsuckers.

“When riches are created by exploiting the people, by those rich people who exploit [others], they take advantage of the work of the people, and those poor people become slaves. We think of the here and now, the same thing happens all over the world. “I want to work.” “Good, they’ll make you a contract, from September to June.” Without a pension, without health care… Then they suspend it, and in July and August they have to eat air. And in September, they laugh at you about it. Those who do that are true bloodsuckers, and they live by spilling the blood of the people who they make slaves of labour.”

“Yesterday, in the Audience, we meditated on the rich glutton and Lazarus. But, this rich man was in his own world, he didn’t realize that on the other side of the door of his house, there was someone who was starving. But this is worse. That rich man, at least, did not realize, and left the other man to die of hunger. But this is worse. This is starving the people with their work for my own profit! Living on the blood of the people. And this is a mortal sin. This is a mortal sin. And this demands a great deal of penance, a great deal of restitution, in order to be converted from this sin.”

“We consider this drama of today: the exploitation of the people, the blood of these people who become slaves, the traffickers of people—and not just those who deal in prostitutes and children for child labour, but that trafficking we might call “civilized”: “I’ll pay you this much, without vacation, without health care, without… everything under the table… But I will become rich!” May the Lord make us understand today the simplicity that Jesus speaks to us of in the Gospel of today: a glass of water in the name of Christ is more important than all the riches accumulated through the exploitation of the people.”


Compare that to the reality of Francis’ behavior and the system he runs! 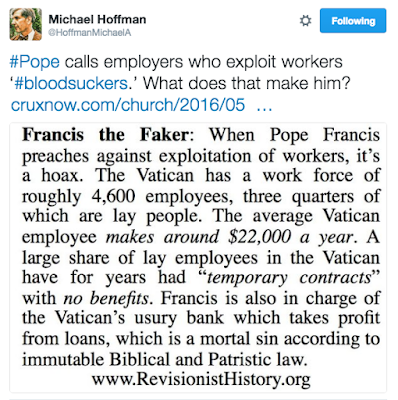