A glimpse into the mind of Bp. Bernard Fellay, FSSPX

Bp. Fellay is becoming like Francis in one sense, he is giving one interview after another. 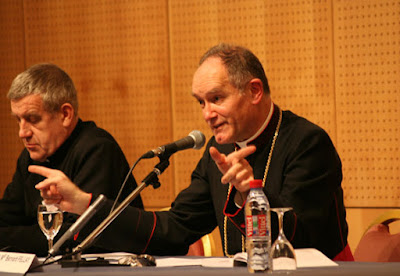 Which direction will Fellay and the Society go?

“The Catholic Church is the only True One”

The Society of St. Pius X has been separated from Rome since its founding [sic] by Archbishop Lefebvre. How does the order’s superior Bernard Fellay view this?

Bernard Fellay leads the traditionalist Society of St. Pius X, which rejects substantial reforms of the Second Vatican Council. This year the Superior General was received by Pope Francis for the first time.

Salzburger Nachrichten (SN):  Under Pope Benedict XVI already there were talks between the Vatican and your fraternity. What has changed under Pope Francis?

Bp. Fellay:  The process of rapprochement is always the same. We have always recognized the primacy of the Pope — even on the question of the Society’s episcopal consecrations. These were not a denial of the primacy and did not at all [um nichts in der Welt] mean to be a separation from Rome.

SN:  But these consecrations were not licit according to Church law.

Fellay:  That is correct. However, this does not mean that we reject the primacy of the Pope. When someone disobeys his father, he does not thereby reject his father. Viewed externally, the episcopal consecration was an act of disobedience, but not a rejection of the authority [of the Pope]. That’s why even the Vatican never said that the Society of St. Pius X was in schism for it. This has become clearer and clearer during the [process of] rapprochement: We are not schismatics, we are not separated from the Church.

SN:  You will continue to ordain priests without permission, then?

Fellay:  Certainly, but I know that this happens with the tacit, tolerant approval of Rome.

SN:  In 2009, Benedict XVI lifted your excommunication. Had you yourself felt [sic] excommunicated?

Fellay:  No, never. An excommunication is based on a serious sin. That’s why we’ve always explained that we carried out our consecrations as an emergency measure. Yes, we took measures which are forbidden under normal circumstances. But during an emergency there are other standards [to be followed]. That’s why I never felt [as though I was really] excommunicated, even though the Vatican treated me as such.

SN:  So then did the lifting of the excommunication have any meaning [for you]?

Fellay:  Not much. It was a certain recognition of our status, our situation. The Pope acknowledged thereby that we are no rebels, that we did not set up a parallel church but are a part of the Roman Catholic Church. In this sense the lifting of the excommunication was meaningful. But of much greater importance to us was Pope Benedict XVI’s acknowledgment in 2007 that the Tridentine Mass was never forbidden.

SN:  Pope Francis has permitted Catholics in the Year of Mercy to go to confession even with priests of the Society of St. Pius X. Will this [permission] continue beyond this year?

Fellay:  This permission shows Pope Francis’ concern for the salvation of the faithful. In addition, the Pope confirmed to me personally that this authorization will remain in force beyond the Year of Mercy.

SN:  Benedict XVI was a theologian, [whereas] Francis is more of a pastoral thinker. Is this an improvement with regard to the Society of St. Pius X?

Fellay:  Benedict XVI was very attentive to doctrine. Francis looks more at the person. Here and there he even sees doctrine as an obstacle perhaps. For us it is important that the way leads forward to what is right, to what is true. We have always considered ourselves as Catholic. If this is ultimately accepted [acknowledged], we are good with that.

SN:  The sticking point is the Second Vatican Council: religious liberty, ecumenism, episcopal collegiality. Are there any clarifications concerning that? Or are such not needed?

Fellay:  I think that the current position of the Holy See, and especially also that of the Congregation for the Doctrine of the Faith, is the result of intense discussions since 2009. A lot was clarified in the process. We do indeed have objections concerning the three points you mention. But today a lot of Catholics move far beyond the texts of the council by appealing to the spirit of the council. Rome acknowledges that our positions are correct on many points.

SN:  What does this mean for religious liberty?

SN:  Therefore the council says that it is a matter of each individual deciding in his own conscience to embrace a particular religion.

Fellay:  Vatican II explicitly says that man must seek the truth and adhere to it. At the same time, it [the council] denies this principle in the realm of the state: The state must grant freedom to all religions and is not allowed to interfere with or restrict any of them, even the false ones. And this on account of a natural right. By contrast, the traditional teaching of the Church says that the state can tolerate false religions but these cannot invoke a natural right [to exist or be tolerated].

As regards the Church, however, she has the duty always and everywhere to proclaim the truth to men and to lead them to the truth. The Catholic Church is the only true religion, the only one that can save man. That’s why she is missionary.

SN:  When someone embraces a different religion, he is in error?

SN:  What does this mean for the ecumenism of the Christian churches?

Fellay:  If one understands ecumenism to mean that all Christians are to find their way back to the [Catholic] Church, then we too are in favor of ecumenism. We pray for the unity of Christians. But to believe that anyone can attain salvation in whatever way he sees fit — we say No [to that], that is not the teaching of the Church. In this sense we oppose ecumenism.

SN:  Where is the problem with regard to episcopal collegiality?

Fellay:  Pope Paul VI specifically added an additional, explanatory note to the conciliar text: No bishop is allowed to claim to be a part of the leadership of the Church if he is not with the Pope and under the Pope. The Pope alone decides whether [someone] and who has a say in the Church. He is the sole ruler [Alleinherrscher]. To claim that the bishops have some sort of democratic legitimation, is entirely false. For this contradicts the teaching of the Church completely. But this is utterly ignored by most dignitaries today.

SN:  What is your position on Judaism? You allegedly said in 2012 that the Jews, the Freemasons, and the Modernists are the enemies of the Church.

Fellay:  I have tried several times to correct [richtigstellen] this sentence, which was never authorized by me thus. I never said “the” enemies of the Church, only “enemies”. And this statement was made in connection with the question of who was putting pressure on Rome against an agreement with the Society of St. Pius X. Concerning this I said it is astonishing that it is precisely these groups, which often show themselves as enemies of the Church, that do not want us.

SN:  What does this say about your position on Judaism?

Fellay:  It has nothing to do with the Jews as a people but only with some Jewish organizations. I never meant to target Judaism [as a people] — excepting their religion. A religion that rejects Christ as the Son of God is opposed to Christianity.

The Messiah comes from the people of the Jews, and for that reason it is entirely clear that the attitude of each Catholic vis-a-vis the Jews in general is a very special one, and not one that is antagonistic. But it is deplorable that they have not recognized the Messiah so far. They will do so — this was foretold by St. Paul. It says that at some point the people of the Jews will convert, and this will be of extraordinary benefit to the entire world.

SN:  What significance does the Holocaust have [for you]?

Fellay:  The Holcoaust has something to do with National Socialism, with Hitler. It has nothing to do with the Catholic Church. The Holocaust is a tragedy like any other genocide. The Church has always spoken out against it. So do we.

Are the Society of Saint Pius X and Bp. Fellay restoring the Faith in modernist Rome or are ‘humble’ Francis and his revolutionary cohorts rubbing off on them?
Posted by hereisjorgebergoglio at 2:29 PM