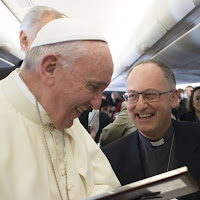 The modernist, Rev. Antonio Spadaro, whom has interviewed Francis more than once and written a book, La mia porta è sempre aperta (My Door is always Open), about these conversations offers his insights in to who Francis is and what makes his pontificate.  He singles out five characteristics of Francis’ reign and explains each of them.  They are:


What is interesting is here is a Jesuit, Spadaro (often referred to as a Jesuit’s Jesuit), justifying even excusing his fellow Jesuit’s un-Catholic behaviors and concluding that none of this is really planned.  Do these revolutionaries really tell themselves the lie that they are on a mission from God as they destroy Catholic tradition?  Or are these men so filled with hubris they no longer care about Our Lord nor fear Him?  If Antonio Spadaro had wanted to be accurate he would have started the blog entry with this:


— A pontificate where the jaw is always in movement

The post is still an insightful one as the reader can see glimpses of the insanity of a modernist,

Posted by hereisjorgebergoglio at 6:06 AM